“Empower women and you will see a decrease in poverty, illiteracy, disease and violence.”
?Michaelle Jean, Governor General of Canada, 2006-2010

A good starting point to address the question “Why aren’t there more women involved in politics?” is the Canadian documentary, 25 percent. It is just 36 minutes long and is both inspiring yet challenging. The points raised in the film quickly bombard the viewer.

The film’s premise is that the United Nations, as part of its Women In Democracy initiative, has set the target for female elected representatives to be a minimum of 30%. When women make up half or more of the population, this is a fair starting point. Canada has some high profile examples of female politicians such as Ontario Premier Kathleen Wynne and federal Green Party leader Elizabeth May. However, in Canada, the statistics present a different picture of Canadian political life.
–In 2013, just 24.8 percent of the 308 seats in Canadian Parliament were held by women.
–Of the 20, 513 municipal seats in Canada, 25% are held by women.
–Of the 3726 Canadian mayors, 16% are female.

To put this in perspective, Rwanda, Cuba and Afghanistan rank higher than Canada when it comes to female representatives. From the most recent data, Canada sits at position 55 on the UN rankings.

But, why is having a greater percentage of women in public office better for society? The documentary makes the point that it isn’t just about allowing more women into politics for its own sake. There is, in fact, a lot of potential that is being untapped. Decision-making in Canada should be between both sexes because the decisions that are made affect both sexes. As Kathleen Wynne notes in the documentary, having more female elected representatives leads to broader and different issues being discussed in politics. It is about looking at bigger picture of policy. For example, job creation might depend on other policies such as childcare or increased opportunities for education. In short, politics as a whole must be seen in a different way.

But the answer is not simply saying more women should run for political office. It is not simply blaming the “old boys network” and concluding that women cannot penetrate it, so why bother. Creating more opportunities for women in politics is much more subtle than just them barging into the chambers of power. It is about encouraging and creating leadership opportunities for girls and women from an early stage. It is about recognizing that girls and women are allowed to express their views and for women to recognize that speaking up can create positive change. It is creating a mentor network where role models can recognize and train up the next generation of leaders no matter their sex, age, or background.

Another huge barrier to women in politics, however, is the fact that women must often juggle roles in caregiving and managing households in addition to an outside career. Political life tends to revolve around long and unsociable hours, and support is limited in terms of childcare outside normal business hours. This also needs to be addressed.

But, if Canadian society cultivated a political culture where everyone who wanted to enter politics?women, racial minorities, and younger politicians?could, then the traditional image of politics will shift. All levels of government will need to make the decision to change and adapt. Whether society is ready to embrace this change remains to be seen.

Carla Knipe is an AU English Major who lives and writes in Calgary, Alberta

On the Hill – Our Own Backyard 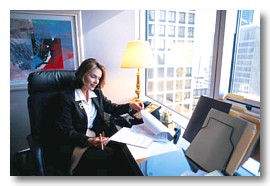 From My Perspective – Women in the Workplace