Norwegian Erik Poppe started his career as a photojournalist, covering war zones all over the world before turning to cinematography. Many elements in his latest feature, A Thousand Times Good Night, the story of a photojournalist torn between career and family, are autobiographical (he admits that some lines in the movie came from his own children). Poppe recently took the time to answer Wanda Waterman’s questions about his background, influences, and current project.

What was your most beneficial educational experience?
My years as a student at the Dramatic Institute (Dramatiska Instiutet) in Stockholm gave me a great deal of practice and theory. I had teachers who pushed me in the right direction, and I was lucky. Film schools are not always the right thing for everyone, but, at that moment of my life, ending a career as a photographer and moving into movies was the best thing that could have happened to me.

I watched a lot of Francois Truffaut’s early movies, like The 400 Blows and the Italian Rome, Open City from 1946, or Bicycle Thieves, and loved them all. I fell in love with Robert Bresson’s later movies and was blown away by his Pickpocket. Movies from the seventies like Alice doesn’t Live here Anymore and Klimov’s Come and See were also a big influence.

What was the most mesmerizing experience for you while making A Thousand Times Good Night?
It was definitly working with Juliette Binoche. It was a challenge to nail the script and the dialogue with her, and I loved the process all the way.

It was wonderful to be able to introduce new actors and mix them with such incredible actors as Nicolai Coster-Waldau and Juliette.

Laureen Canny, who played the 15-year-old daugther, was the one, among several hundred of young girls, to be cast. At the moment I saw her performance I knew that this was a moment, similar to the one you know that only appears a couple of times during a career as a director. You’re confronted with such a rare talent that no one has really seen before, and You’re the one to bring her out to the screen for the first time.

How did you get such moving performances from Juliette Binoche?
In general I need a lot of preparation and rehearsal time with my actors. This time I had a limited time but needed to build a relationship on trust, a common vision, and an understanding of her part. The time we had was spent on preparing, preparing, and preparing the script, photographic skills, discussing her part as a mother, and finally pushing each other into making brave decisions on how to tell the story.

Do you have any thoughts on why film can be healing?
If It’s honest, and the audience members identify with the theme and the protagonist, then It’s like going on a journey you weren’t expecting. My role as an artist is to raise questions and not hand out all the answers. The questions do start processes among people like discussions, thoughts, or fresh perspectives, so film may be able to make a small impact, a change, or even heal.

How did your experience as a photojournalist prepare you for A Thousand Times Good Night?
I didn´t need to do all the research I usually do in advance. The story is also quite personal, and almost private, in the sense of knowing how to work out the story with my fellow screenwriter or how to work on the direction in an honest way.

Are there any books, films, or albums that have deeply influenced your development as a filmmaker?
I am influenced by all other art forms, and not particularly influenced by contemporary movies any more. Music is essential, and It’s very often classical music by masters like Bach, Händel, or John Cage, or some of the other minimalists.
Scandinavian and Norwegian authors like Knut Hamsun, Për Lagerkvist, or the contemporaries like Jon Fosse or Per Petterson are all inspiring to me.

If you had an artist’s mission statement, what would it be?
don’t be general. Be specific.

Tell us about your current projects.
I am working on the final edit of my next movie, The King’s Choice. It´s about the first three days of the German attack on Norway in 1940 and tells the true story of the Norwegian King Haakon and the thriller surrounding him. Every institution and person fails or collapses around him, and he is sort of left alone, not knowing how to handle the situation before he sees that he needs to represent a resistance toward Hitler. It’s a story of his escape, with the German trying to hunt him down.

In Conversation with Director, Erik Poppe 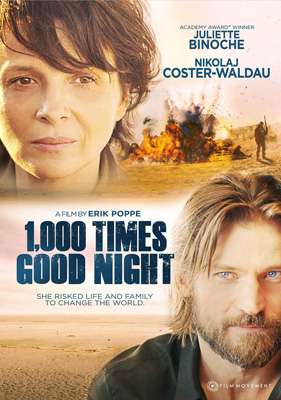