Articles
The Voice
The Golden Age of Piracy is Nigh 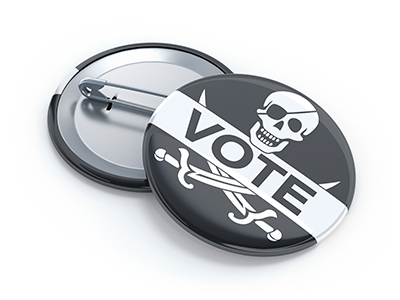 Is it coincidence that Talk Like a Pirate Day falls in the middle of the Canadian Federal Election campaign? Arrr, mateys, I think not!

Talk Like a Pirate Day falls on September 19, exactly one month before voting day for the Canadian federal election. The now-international observance of Talk Like a Pirate Day (ITLAPD) is a nod to the Golden Age of Piracy. (Resemblance to any current or future government is strictly coincidental, of course.)

The holiday started as a lighted-hearted romp by John Baur (aka Ol? Chumbucket) and Mark Summers (aka Cap?n Slappy) of Oregon. Although the idea was conceived in June of 1995 in a “moment of temporary insanity,” the date of September 19 was chosen due to the?perhaps coincidental, perhaps not?birthday of Summers’s ex-wife.

The notion really took off when witty writer Dave Barry endorsed the idea in his Miami Herald column in 2002. Once the media got hold of it, the ITLAPD took on treasure chest proportions. These days, wannabe pirates can visit the official website or follow the Facebook page to learn how to talk pirate. You can even order pirate merchandise, including “Prepare To Be Boarded” t-shirts, “Blow Me Down” boxer shorts, and?because every pirate needs a place to store their rum?”Talk Like a Pirate” beverage flasks. Or you could just learn to throw around words like “avast,” “bilge rat,” “grog,” and “wench” (using the last advisedly.)

Any connection between Talk Like a Pirate Day and the Pirate Party of Canada is strictly coincidental. True, they both contain the word “pirate,” both flog cool t-shirts, and there’s that Golden Age of Piracy thing, but other than that, there is no resemblance. None. Whatsoever. A bit strange though, that there’s no Talk Like a Harper Day, or Talk Like a Justin Day (and one hopes there will never be a Talk Like an Elizabeth May Day, but every day seems to be Talk Like a Mulcair Day.)

The Pirate Party of Canada?yes, really?is running candidates in the 2015 federal election. The Pirate Party, which had its inspiration in the Swedish political party of the same name, was officially recognized by Elections Canada in 2010. The first candidate, Jeff Coleman, ran in the Winnipeg North by-election in November 2010. With 94 votes, Coleman didn’t win, but he did beat both the Communist Party and Christian Heritage Party candidates. So, arrrgh!

In the 2011 Federal Election, the Pirate Party of Canada ran ten candidates in ridings across the county. They didn’t win any seats then either but, with 3198 votes, they smoked the Marijuana Party (1864 votes) and damned near beat the Rhino party (3819 votes.)

In the 2015 election, Pirate Party candidates are once again seeking election in ridings from British Columbia to New Brunswick. The Pirate Party of Canada is running on a platform that includes open culture and individual privacy. Pirates (can we call them pirates?) are anti-monopoly and pro-equality. In a topical press release on September 10, 2015, the Pirate Party of Canada revealed its Policies for Combating Commercial Piracy. You can read the full Pirate Party manifesto here and order some really cool t-shirts here.