Columns
The Voice
Primal Numbers – A in Aerobics

We all know the way to get better grades. Turn off the TV, put down the smartphone, and spend more time studying. It’s good advice, but there’s something else you should be doing to improve your memory and ability to focus. As the latest research shows, hitting the gym could be just as good for your grades as hitting the books.

It’s not exactly news that exercise is good for us. But when we think of improving our brainpower, of flexing those little grey cells, we usually think of some sort of brain-training exercise like a Sudoku puzzle or an app with mazes. Those things will probably help, but the one thing they have in common certainly won’t.

That’s because they all involve sitting?or at least not doing any exercise. And as the Harvard health blog reports, “exercise changes the brain in ways that protect memory and thinking skills.”

Not just any exercise, though. Aerobic exercise brought the most improvement to study participants, and the results are more than anecdotal. Indeed, they’re measurable. In one study at the University of British Columbia regular aerobic exercise appeared to “boost the size of the hippocampus, the brain area involved in verbal memory and learning.”

If you want to see for yourself, check out this image of brain scans at Boston.com. It shows the difference in brain activity between kids that exercised before taking a test versus those who sat quietly.

Which makes it all the more worrisome that so many school boards have reduced, or even eliminated, physical education as part of the curriculum.

In the US, The New York Times reported that, as of 2012, almost half of high school students across the country “said they had no physical education classes in an average week.” In Canada, a 2014 report by Active Healthy Kids Canada notes that only 7 per cent of kids aged 5 to 11 are meeting the guidelines for basic physical activity every day. In the 12 to 17 age group, that number drops to 4 per cent.

But here’s the interesting thing. In that same study, an overwhelming majority of schools reported having things like gyms, playgrounds, and playground equipment. The catch? Only about half of them, a mere 55 per cent, reported that they had “a fully implemented policy for daily PE for all students.” In other words, they’ve got the tools, they just aren’t applying them.

Now, it’s true that parents can set an example and encourage their kids to be active. But it’s also true that kids spend a large chunk of their day in school, a lot of which involves sitting. And, more and more, involves staring at the screens on tablets and computers?the same kind of screens they stare at when they go home at the end of the day.

As adults, we can take this information and act on it. You might be someone going back to school to get a degree in your fifties, or an 18-year-old fresh off to college, or a senior who wants to reduce the risk of dementia. For kids, it will require a bit more direction. A parent or teacher, for instance, who makes sure that regular daily activity is a priority, not an afterthought.

The bottom line, though, is the same no matter what your age. Get moving, every day. Even if you’re not worried about weight loss or muscle strength or endurance, do it for your brain. Do it whether you’ve got access to the best gym around or you have to dance around your living room because it’s too darn cold and snowy to go anywhere.

Because getting that A in aerobics might just raise your mental game in everything else.

The Fit Student—Tame That Fanatic 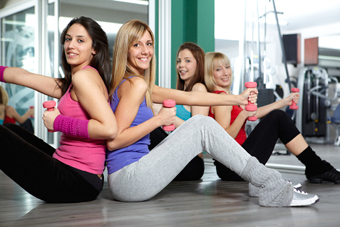 Health Matters – Time for a Workout