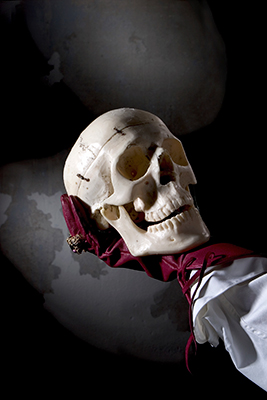 Being an AU student, what I witnessed was like a scene from a nightmare. I peered into the bowl of a vast lecture hall where dozens of students hunched over desks, furiously scribbling away. A timer projected on the screen above the prof’s head counted down the minutes, then the seconds. It was horrible. Not because those students were writing exams, but because they were writing them by hand.

After several years of being an AU student, I find one of the best aspects of online study is online exams. To me, writing by hand is excruciating torture. When AU began making the transition from paper to online exams, the sun shone a little brighter in my sky.

I witnessed the lecture hall scene above recently when I visited University of Ottawa’s campus. I was there to attend a general-interest lecture, not to study. After driving an hour to get there, paying exorbitant parking fees, then trudging across the rain-soaked campus, I thought, “I’m so glad I don’t have to do this all the time.”

Online study has its challenges. There are times when it would be beneficial to be on campus with hundreds or thousands of like-minded colleagues.

But as I browse through the student newspapers and magazines of campus-style universities, I notice that many of the articles relate to issues I don’t have to worry about:

Crime. Student safety at university campuses is a major concern. Studying online at my campus of one, I don’t have to worry about crime on campus. My car won’t be broken into while I’m in class, nobody is going to swipe my purse, and nobody is going to stalk me around campus.

Parking. University parking rates are insane. Studying online, I don’t pay parking fees, I don’t have difficulty finding a parking spot, and I don’t have to suffer inclement weather while walking from car to class.

Drama. Where there are people, there will be hassles. Studying online means nobody is cutting in front of me on my way to get coffee. Nobody is talking too loud, invading my space, or being a general asshole. Although I live where I study, I have no dorm mates who might hog the bathroom or leave disgusting splatters in the microwave (or vice-versa.)

Judgement. There’s no such thing as a bad hair day at home. I don’t have to worry because nobody can see me. Neither tutors nor other students can see what colour my skin is or what body shape I have. Nobody can make judgements on me based on my faith or sexual orientation. My grades are a reflection of the academic material I produce, and not of cultural conflicts between me and the marker.

Most AU students quickly identify the pros and cons on online education. The pros include flexibility while the cons include isolation. However, there’s a lot more to consider than those elements which surround the act of studying. Studying online eliminates many frustrations that accompany studying on site. By dodging campus drama, AU students conserve their energy for what matters: successful learning.