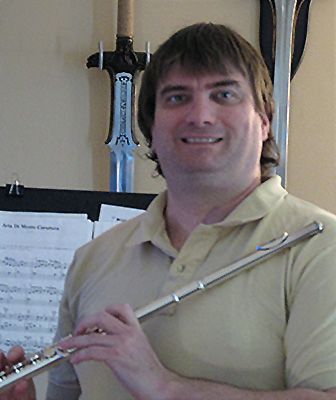 Jason Bernard is an AU student from Moncton, New Brunswick, and is in the Masters of Science in Information Services program at AU. Jason received his undergraduate degree in Computer Science from Bishop’s University in Lennoxville, QC, and he ultimately plans to pursue a PhD and become a research professor.

Jason was recently interviewed by The Voice Magazine. Here’s what he had to say about school, flutes, and science fiction.

First of all, whereabouts do you live? And have you always lived there?
I live in Moncton NB, but I’ve been all over. I was born in York, Ontario, but spent my childhood in Moncton. I left to go to university in Quebec, and I lived in the United States for a while. I served in the army and so moved around a bit, but now I’m out of the army and back home in Moncton.

Describe the path that led you to AU.
I had been in the army, but then I got injured. I was medically released from the army, and I had to decide what to do with the rest of my life. I was a computer programmer but I found I didn’t like that too much. I really wanted to get into research and academics. At the time, my kids were younger and it just wasn’t possible to go to a physical university. AU became the right option at the time.

What do you do like to do when You’re not studying?
I like to play the flute, mostly. I also play video games?they’re great for relaxation. And I read books, mainly science fiction.

Who in your life had the greatest influence on your desire to learn?
I loved school right from grade one and That’s thanks to a truly amazing grade one teacher who recognized my intellectual capacity. She made me feel I could learn anything, and I’ve carried that thought with me all my life. If I’m not learning, I’m not happy.

What famous person, past or present, would you like to have lunch with, and why?
Well, I’m not a religious person, but I would say Jesus?how fascinating would that be? Who has had more of an impact on how people live now than Jesus? I would be interested to hear his impression of how Christianity has evolved to what it is now.

Describe your experience with online learning. What do you like? Dislike?
I really like the ability to control my own hours, and to control how I learn. The AU teaching staff have been really open to letting me learn my way. I like to learn by tinkering and they allow me to do that even if It’s not strictly following the syllabus?I just run my ideas by them and they let me run with them.

What I dislike is the inability to hold discussions with fellow students. You don’t get that on-campus feel of being with other students; you really feel alone. The instructors are trying to promote discussions on The Landing but it hasn’t attracted a lot of participation from students yet.

Have you had a time when you wavered about your education?
Yeah, just last year. I was writing my first conference paper and, well, it wasn’t going very well. It required a great many revisions. I really struggled with the writing process and began to question if academics were really for me. I faced a real loss of confidence.

I got through it by simple tenacity. There really wasn’t much of an option but to move forward. I took some of the mini-courses from the AU library to improve my academic writing and I believe my writing has improved. I’ve learned to write in a way that leaves no questions.

What was your most memorable AU course?
It was COMP 658, Computational Intelligence. One reason why I picked AU was for its offerings in the relatively new field of Artificial Intelligence. I found the course just amazing. It really improved my understanding of AI.

What have you given up to go to AU that you regret the most? Was it worth it?
Not much of anything. Mainly just a few years of earning money, but I expect it will work out in the end. I’m in my early forties so, while retirement isn’t that close, It’s definitely on the radar. Because I’m not earning, I’m not contributing to my retirement savings; sometimes I look at my RRSPs and sigh.

If you were the new president of AU, what would be your first project?
Although AU is an online institution, I think my focus would be how to get students to communicate. I’d like to create an on-campus experience without being on-campus.

What’s your favourite sound?
I have two. The first one is thunder. And the second is that cool sound effect that lasers make in movies (pew! pew!).

What is your most prized possession?
Definitely my flute. I’ve had it for five years and it helped me through a difficult time in my life. After I was injured, there wasn’t a lot I could do, or at least it felt that way. I took up the flute. It made me feel that there was something I could do.

What is the most valuable lesson you have learned in life?
It’s two parts. First, don’t give up. But, because the first lesson can become hard at times, I would add a second part: don’t be too hard on yourself. I’m a bit of a perfectionist, and sometimes I’m too hard on myself. I want to be good at everything I attempt but, realistically, nobody should expect to be good at absolutely everything?it just isn’t possible.

What do you think about e-texts?
I love ?em. Why waste paper?

How do you find communications with your course tutors?
Most have been quite good. Sometimes they’re not as speedy as I would like getting marks back. But I know they have other courses, and research, too. But if You’re in the third section of your course and you haven’t got your marks back for the first section, you might be making the same mistakes without knowing. I guess I was spoiled a bit a Bishop’s University. It was a smaller campus and it was just so easy to go knock on the professor’s door and get immediate feedback.

Where has life taken you so far?
In Canada, I haven’t yet been further west than Ontario. I’ve been around the US, and I’ve been to Spain. I’ll be going to Romania soon for a conference. I like to travel and I want to start doing it more.

What (non-AU) book are you reading now?
I just finished The Martian, by Andy Weir. I wanted to read that before going to see the movie. And I just bought The End of All Things, by John Scalzi. It’s the finale to the Old Man’s War series, and I’m really looking forward to reading it.