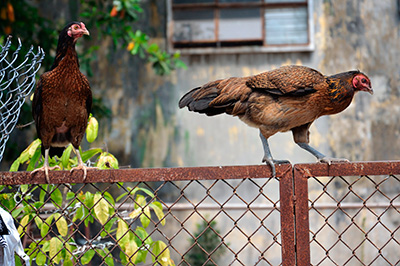 Awareness of the environment and concerns with the mass-production of our food has led to a large increase in the number of people who raise their own food, not just by vegetable gardening or fruit cultivation, but also taking it a step further and keeping animals on their property. Keeping backyard chickens for egg production and as pets has been a large aspect of this trend, but there are other ways to become a small-scale farmer.

If you would like to try this hobby, do not do it by purchasing animals and then finding out how to take care of them! This hobby requires an extensive amount of research beforehand. You must check out the regulations, perhaps at more than one level of government, that exist in your jurisdiction. Taking the time to investigate local laws and bylaws may save you a lot of aggravation in the long run. Doing your homework may also determine what type of livestock, and how many, are allowed on your property. For example, in some areas a single, small pig may be kept as a pet, but in others, especially urban areas, pigs are not allowed at all. In many towns and cities, the same legality applies to backyard chickens.

The next step is researching the requirements for the type of animal you would like to raise; for example, rare breeds might have different care requirements than more common breeds. You are dealing with live animals and their welfare should be paramount in any decision. Also, if you decide to raise your animals for meat, especially for commercial sale, you will need to check with the Canadian Food Inspection Agency which regulates animal products into Canada’s food supply. If you are lucky enough to have an organization in your area for small-scale animal husbandry, then that would be a fantastic resource to connect with. There are also many Internet forums devoted to all aspects of small farms. Community colleges may be another source of information and expertise.

Another possible path is urban beekeeping. Increased awareness of the role of bees in ecology is leading to a surge in popularity of small-scale apiarists. The crisis caused by the “Colony Collapse Disorder” phenomenon among existing hives is also creating a need to protect and restore bee populations. Bees can be kept in backyards and on rooftops. Suburban gardens can easily provide enough flowers to support a hive.

Being an apiarist is somewhat of an art form, but it does not require a lot of expensive equipment or invasive practices. The biggest concern for urban beekeepers is taking care so that bees do not become a neighbourhood nuisance. Properly managed hives allow neighbours to feel safe and coexist with the bees. A bee stings only when it is frightened, provoked or is threatened, and swarms are actually a rare occurrence.

As with keeping other types of farm animals, it is important to check local regulations concerning bees. Books from local libraries provide a good basic overview of what is involved with beekeeping, but if your area has a local apiarist group (and the number of these groups is growing across North America), joining one is a fantastic opportunity to learn new skills through hands-on courses and workshops, and also to get mentorship from those who are already involved with beekeeping.

There have been news stories highlighting instances of opposition to urban farming. These seem to be far fewer than those that favourably recognize urban food production and the role that small, local farms play in trying to rebalance the quality of our food supply.

Carla and her family have recently purchased her first telescope for stargazing. However, they have been frustrated by the cantankerous Calgary weather!