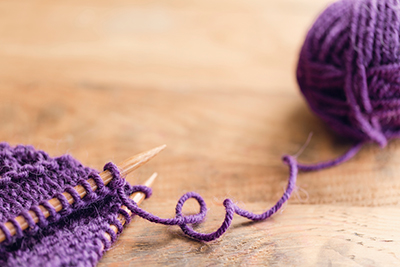 What was once the domain of ladies of a certain age has become?gasp!?trendy. In the past decade crochet, knitting, needlepoint, and other needle-based activities have enjoyed a resurgence in popularity, especially among the younger generations. It is difficult to give an exact reason for the renaissance, but it may have something to do with reconnecting with skills that were once on the endangered list, the pride of creating something that is useful, and the realization that it is an activity that can be done pretty much anywhere. Plus, It’s just plain relaxing.

Embroidery and needlepoint are the needle arts that require the smallest materials and techniques. Embroidery involves decorating fabric with thread or yarn stitches. Cross-stitch, the most common form, is a double stitch using an “X” shape. Needlepoint, also known as canvas work or tapestry, can be done either on plastic or canvas mesh, or on other material such as felt or heavy cotton. Embroidery and needlepoint have had a close association with cultures in the Middle East and India, which held the elaborate embellishment of clothing and other items in high regard. The original needles were made of bone, horn, or thorns but the development of steel needles yielded more intricate and accurate work. The original threads came from a variety of natural sources, including precious metals, but now are largely made of cotton or linen.

Crochet is the next step in terms of needle size. The term comes from the French word for hook, and its origins were likely in the methods used by fishermen to mend their nets. Eventually crochet as a handicraft was seen as a less expensive, less intricate version of lacemaking. Queen Victoria was avid about her crochet, and by the mid 19th century, specialty patterns became available and specialized hooks and threads appeared. Crochet is seen as somewhat of a hybrid craft between needlepoint and knitting. The hook is smaller than a knitting needle but only one hook, aided by fingers, is used to create the patterns of loops. The popularity of crochet took off in the 1950s and reached its peak during the 1960s and 70s, but was later disdained.

Knitting is perhaps most closely associated with needle arts, and is the largest, and perhaps the most complex, of the three. Different projects require different sizes and types of needles and yarns, as well as specific techniques suited to each particular project. Evidence of rudimentary forms of knitting has been found in the Nazca culture in Peru and Saudi Arabia. The craft was brought to Europe around 400 CE, and, by the time of the Middle Ages, the British cultures were producing knitted clothing for the cold weather and knitting guilds were formed. Although most knitted items have been produced on machines since the Industrial Revolution, hand knitting continues to be popular and is held in high regard.

The best way of starting to learn needle arts is by having someone who is skilled teach and guide you through those crucial first steps. Pattern books can be incredibly daunting. Many mail order companies and dedicated needle arts shops are evidence of the rise of this hobby. Finding a shop assistant who genuinely wants to assist and advise a newbie can mean the difference between giving up before really giving the handicraft a chance and persevering through the difficulties.

There are also YouTube videos to provide some visual demonstration, but needlework has become a social activity through an updated revival of the “bees” of yore, with groups calling themselves “Stitch n? Bitch” and other cheeky names popping up in living rooms and community centres across the world.

The recent reputation that needle arts have had of being tacky has actually worked in their favour; that reputation has been embraced with a sense of irony due to the rise in geek culture. Needle arts have been used for kitsch knitting and hipster needlepoint. There are patterns for Star Trek cross stitch banners and Harry Potter samplers. Knitters can recreate almost any item in yarn, which only seems to be limited by creativity and the knitter’s needle skills. Even the humble crocheted granny square has taken on new life in Minecraft-esque afghans. The online marketplace Etsy has created a new version of cottage industries for needle arts, and crafter forums on the Internet have been great places to share ideas.

It is difficult to say whether the momentum of needle arts will continue or whether it will cease to be trendy at some point. But judging by history, needle arts are sure to always be around in some form or another.

Carla would love to be able to take part in any hobby involving a needle, but she has resigned herself that this is impossible due to the fact that she may indeed possess all thumbs.

From Where I Sit – Rejuvenate Your Spirit 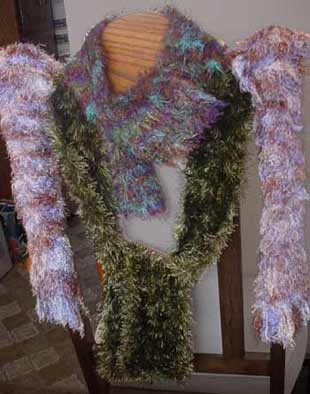 From My Perspective – Knitting Isn’t Just for Grandma