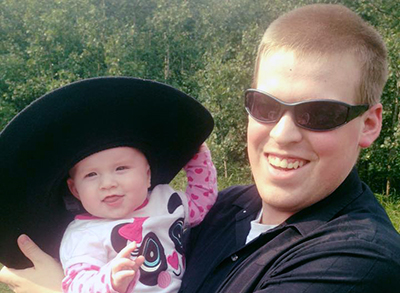 Brandon Simmons is an AU student from High River, Alberta. He is in the Bachelor of Management program at AU. In the recent AUSU By-election, Brandon was a successful candidate, and he went on to be elected AUSU council’s new Vice-President, Finance & Administration.

Brandon was recently interviewed by The Voice Magazine. Here’s what he had to say about school, disasters, and Dragon’s Den.

First of all, whereabouts do you live? And have you always lived there?
I live in High River, Alberta, but I’ve lived all over Alberta. I was born in Lethbridge, then lived in Edmonton, Fort McMurray, and Spruce Grove. After I got married we lived in Okotoks, and now we’re in High River.

Which AU program are you in?
I’m in the Bachelor of Management program. I started out in the Bachelor of Commerce program majoring in Accounting but later switched. My life took a bit of a detour after the disastrous floods here two years ago, so even though I started at AU three years ago, I’m only entering my second year of studies.

If you work, describe what you do.
I’ve been working at a number of things. I have my own business consulting company. I’m also a public accountant. And I’m still doing stuff for the charity I started a couple years ago. Now that I’m VP, Finance & Administration for AUSU, I’ve basically shut down my company, although I’m still passing some work to friends. I had already been winding down the charity. The original need was accomplished so it functions more as a charitable foundation now.

Describe the path that led you to AU.
At one time I had taken on a number of management jobs. I was helping set up a company in Calgary and things were not happening. I realized I was relying on other people when I would rather be working for myself. I applied to go to Mount Royal University, but my math marks were 1% off and I didn’t get accepted. Soon afterwards, I was attending a CMA information session and I learned about the accredited programs at AU. Now I’m glad I wasn’t accepted at Mount Royal?if I had been, I would have never had the opportunities that I’ve had at AU. I really have an edge with my AU program, and it allows a balance between work and studies.

What do you do like to do when You’re not studying?
I don’t have a lot of time when I’m not studying or working?I seem to be always occupied. Mostly, I spend time with my wife and kids. I have two daughters, one is 2 ½ years and the other is 7 months. I like to spend time out in the country, and with friends. I also like horseback riding.

Who in your life had the greatest influence on your desire to learn?
My dad. He had initially started out at university studying to be an accountant, but hard times meant it was difficult to make ends meet. He ultimately went into the trades. He taught me that I can learn something from everybody, even if It’s how not to do something. There’s just so much to learn from other people.

What famous person, past or present, would you like to have lunch with, and why?
That’s a tough one. There are a number of people, but I’ll say Brett Wilson. I’m a big follower of Dragon’s Den, and I’ve been following his business career. Brett’s a really nice guy and a great role model. He’s really ethical, and he strives to do the right thing.

Describe your experience with online learning. What do you like? Dislike?
I quite enjoy it because I can study everywhere and at my own speed. Especially when I was working in the trades, I could pull out my iPad on my lunch break or whenever it suited me. What I dislike is the missed opportunities to work face-to-face with other students.

Have you had a time when you wavered about your education?
I don’t know if I did. I’m not a huge fan of how academics are set up. I don’t like that You’re considered incapable of doing a job because you don’t have a degree. In my view, you still need to have hands-on experience, not just the ability to memorize for an exam. A degree doesn’t give that experience.

I did struggle a bit after the flood [in 2013]. Not long after that, I had to undergo life-saving heart surgery. It was hard to get back on track after all that.

What was your most memorable AU course?
My favourite AU course was ADMN 499 because I got credit for this course by doing the CPA Board Governance Case Competition. I really enjoy the study of board governance. Additionally, I enjoy helping to develop strategic plans to help businesses to grow and resolve challenges.

If you won $20 million in a lottery, what would you do with it?
I would definitely be quitting my job! I enjoy the work I do for AUSU, but I would focus more on my non-profit company. I’d like it to focus not just on assistance after natural disasters, but financial help for ongoing personal crises. After my surgery, I had friends and family to help me out. Some people don’t have that.

What have you given up to go to AU that you regret the most? Was it worth it?
I haven’t had to give up anything; It’s been all positive. I struggled at first with finding time for my studies as I had to work so much.

If you were the new president of AU, what would be your first project?
Sustainability. Actually, I just had a meeting with AU president Peter MacKinnon about this yesterday. Sustainability is one of the big issues. I’m not sure if the new government puts a value on distance education. AU is different: the student body isn’t just 18-year-old students, It’s made of people of all ages, many of whom are balancing studies with full-time work. I’d like to see the government recognize the importance of AU and get the funding changed so we can get the same coverage that other institutions get.

What’s your favourite sound?
Just being out on a farm, hearing farm animals out in the field. It’s peaceful. I hope to get a ranch someday.

What is your most prized possession?
I don’t really have one. That’s one thing the flood taught me: there aren’t many material possessions that matter. What matters most to me is my family.

Please tell us something that few people know about you.
It’s my dream to get into tie-down roping in the rodeo. I’m not sure when or if That’s going to happen, given that you can spend anywhere from $10,000 to $100,000 on a horse. But I’d like to do it, even if I have to lease a horse at first.

What is the most valuable lesson you have learned in life?
Just like my Dad said, you have to learn from others. You are always learning, not just when You’re at school. And you have to keep your eyes open to learning opportunities.

What do you think about e-texts?
I’m not a huge fan. I’ve grown to like them a bit only because I used to have a Surface Pro with a pen. That allowed me to use it somewhat like a book?it gave it a similar feel. Still, I like having a hard text. And I would have hated it on the Surface Pro without the pen.

How do you find communications with your course tutors?
To be honest, I haven’t really used them. I’m an independent learner, and I tend to figure things out on my own. I find the business courses so straightforward that I don’t have any questions about what I’m supposed to do. It was different when I took an English course; in that case the tutor and I didn’t see eye to eye on some things. I think it came down to style differences.

Where has life taken you so far?
Not very far outside of Alberta. I’ve been to California, helping out at a mission with my church. I’ve also been to BC and Montana. I don’t have a big desire to travel?I just love Alberta.

What (non-AU) book are you reading now?
I don’t have much time for reading, but right now I’m reading Redefining Success by Brett Wilson. In it he looks back on his life and traces how his perspective on “success” has changed over time.

Final question: You’re now the VP, Finance & Administration for AUSU. At the end of your term on council, what do you hope to have accomplished?
There is a lot that I would like to accomplish but as it is a shorter term I may not be able to accomplish everything I would like. That being said, three things I would like to accomplish outside of the many regular administrative duties that I have would be: 1) to ensure that policies that have to deal with governance and finance issues with the council are refined. This will help to protect the best interests of AUSU members as a whole; 2) Refine the AUSU executive training process so that new AUSU executives can hit the ground running with the specific administrative roles they have; and 3) The third Item is already in the process: I would like to see greater advocacy in regards to the financial support of AU. This is something that we have talked about with AU executives and ultimately we need to discuss with government officials. The financial wellbeing of AU is crucial to all of our membership and with only 30% of AU’s operating costs being covered by the government compared to approximately 55% for other universities it shows that the government does not understand the true value of AU and the opportunities that it opens for students.