Columns
The Voice
In Conversation with The Naturalists

Which elements in your childhood and early years pointed you toward music?
Craig and I grew up in a very musical environment. While it took a few years to actually pick up an instrument, I was listening to everything from the Beach Boys, the Beatles, Crowded House, or Hall & Oates at a very early age. My dad always had something on the stereo. I picked up the bass at like 12 years old but was never any good. Then, when I was about 13 years old I started up with?and stuck with?the drums.

Do you feel that Buffalo is a creatively stimulating city? Why or why not?
I think for the last decade or longer, Buffalo was looked at as almost a downer of a city. I don’t think that statement holds any truth anymore. Even just in the last two years there’s been so much growth in the city’s culture and art, and there’s so much talent coming out of this city It’s unbelievable.

Why did you call this EP “Home Honey, I’m Hi”?
We definitely wanted to go in the weirder direction when it comes to album titles. But ultimately It’s just a play on the phrase “Hi Honey, I’m Home,” and once Craig brought up the EP title (Home Honey, I’m Hi), we all had it stuck in our heads.

Who writes the lyrics, and where does most of his inspiration come from?
Craig writes all the lyrics to our songs. I wish I knew more about where his inspiration came from for them but it seems to me that they come from real life?experiences, dreams, and perspective stories told by others. Oftentimes bands will get caught up writing about one subject, usually love, sometimes politics. What I like about Craig’s lyrics is that he has a wide variety of subject matter that he deals with in his lyrics. And That’s coming from a drummer, folks.

Do you consider yourselves a throwback to the nineties?
I don’t think we’re a throwback to the 90’s. We play what we would want to listen to basically. What I do think is that the nineties were all about drifting away from music that became essentially mainstreamed garbage. That whole scene was about getting back to real music and songs that were no bullshit. I think we’re starting to see that all happen again in today’s music scene and That’s really exciting.

Are there any books, films, or albums that have deeply influenced your development as an artist?
Might be a strange one, but That Thing You Do with Tom Hanks is probably the biggest reason I started playing drums. Guy Patterson was so cool, man. Manchester Orchestra’s Mean Everything to Nothing album could easily be listed as number one on albums that have influenced me the most. 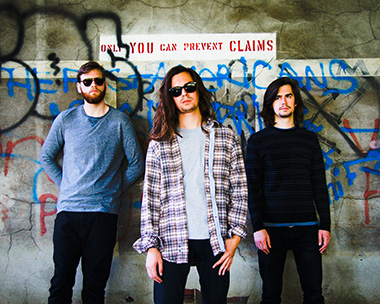