Articles
The Voice
Navigating the World of Study 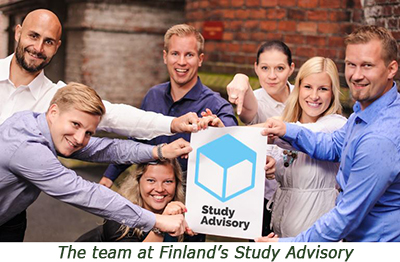 Want to explore the world of universities? Would you like to know what’s it like to learn in Lisbon or study in Seoul?

Just as many travellers rely on TripAdvisor to guide them to the best?and help them avoid the worst?of hotels and restaurants worldwide, now students can use the new Study Advisory website to research universities worldwide. Study Advisory (at http://StudyAdvisory.org), much like TripAdvisor, relies on ratings and reviews drawn from the experience of many.

Study Advisory, launched in September 2015, was created by a team of seven former university students in education-enlightened Finland. While initial site activity is primarily from students and universities in Europe and Asia, this English-language site covers universities around the globe.

Why a global university ranking site? According to Study Advisory product manager and co-founder Veikko Lindberg, “We want to provide a fresh rating that is useful for the students. Although the traditional academic rankings are highly valued we want to develop something better suited for the prospective students. Young people are interested about the quality of teaching, student services and atmosphere, not so much about who has won a Nobel in a certain university in the mid-fifties.” Additionally, says Lindberg, “We want to see also those universities shine who do not succeed in traditional rankings.”

Comparisons between Study Advisory and TripAdvisor are not surprising. Says Lindberg, “We all are big fans of TripAdvisor and we all use it.” Lindberg explains further: “Our initial idea behind the service is similar to TripAdvisor?s: we want to know what people really think of the ?places? they’ve chosen. However, the difference is that for us the ?place? is a university.”

Study Advisory allows students to compare almost 12,000 universities worldwide. With reviews and tips from current and former students, It’s like getting feedback from fellow students who have been there and done that?not much different than getting feedback from fellow travellers. Says Lindberg, “We want to encourage all current and former students to rate their universities. Like in TripAdvisor, there are some really cool reviews already. Students are talking about the prices of lunch, possibilities to practice sports, parties, networking, future career aspects?and that is exactly what the future students want to know!”

Unlike the somewhat sterile university ranking releases that provide survey statistics but little human feedback, the Study Advisory site includes both ranking points and reviews. Students can add unstructured comments about their own university experience. It’s like getting honest, human feedback and not glossy brochure marketing or stuffy statistics. (When asked if Study Advisory might incorporate national rankings, like the Maclean’s University Rankings for Canada, Lindberg didn’t rule it out, saying, “We want to provide the most useful information to the students and if we find out that some ranking is something that is a must in a certain region then we’ll surely look into that. Adding a new ranking to our service is possible.”)

Adding a university review is easy and involves rating the institution on six different areas (teaching, campus, student services, internationality, value for money, and security), then adding a review in your own words. No login is required to add or read reviews. Even better, Study Advisory donates 25 cents (EUR) per each added review to UNESCO’s Programme for the Education of Children in Need.

An overview on what It’s like to study in different countries can be found on the country profiles page of Study Advisory. This page is still being compiled, with only about 20 out of an expected 100 country profiles as of early this week. (Just so you know, Canada’s byline says “we’re not just colder, we’re cooler!”, while Finland promises “Top-notch education and exotic nature”.)

Just as TripAdvisor began with one review (and now has many millions), Study Advisory is in the initial stages of building its global review base. Of the approximately 100 Canadian universities listed, for example, only one?University of Montreal?has a student review so far. If You’re looking for information on universities, you may need to bookmark the site for later. In the meantime, you can help other students by adding your own review of universities you have attended. (If you want to review AU, you can find it here.)

Study Advisory is on its way to forming a key resource for students deciding where in the world to study. According to Lindberg, “One thing that is sure is that we’ll never stop developing Study Advisory. We want our service to be as useful as possible for the future and current students…Our goal is to become a platform that provides relevant and needed information to students where and what they should study.”

Path of a Progressive Discipline