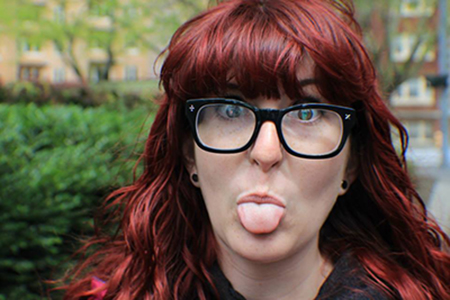 Kaitland Goulet is an AU student from Edmonton, Alberta who works full-time as a legal assistant. She is in the Bachelor of Professional Arts program at AU, majoring in Communication Studies.

Kaitland was recently interviewed by The Voice Magazine. Here’s what she had to say about school, social life, and traveling.

First of all, whereabouts do you live? And have you always lived there?
I live in Edmonton. I’m originally from Brooks, which is south of Calgary. My family moved to Edmonton when I was 16 years old.

Describe the path that led you to AU.
I have always wanted to go to law school but have taken the path less traveled to get there. When I finally decided to go to law school 3 years ago, I had recently graduated the Legal Assistant Diploma from Grant MacEwan. I had heard that my diploma credits would transfer into the BPA program at Athabasca. Once I confirmed this, I decided to apply for Athabasca! The BPA degree will save me two years? worth of undergrad courses but still meets the requirements to get into law school.

What do you do like to do when You’re not studying?
I’m a really big travel nut. I get away a couple times each year but I would like to travel more. I run a travel blog called The Wandering Canucks, so in between trips I’m tinkering away at that.

Who in your life had the greatest influence on your desire to learn?
Probably my Dad. He always had a wide range of interests, really outside the normal range. I had to learn about a lot of things just to keep up with him.

What famous person, past or present, would you like to have lunch with, and why?
Amal Clooney. Besides the fact that She’s married to George Clooney, which is awesome in its own right, she seems like she would be a very interesting person to sit down with. She is a successful lawyer who works predominantly in international human rights law, such as the recent Mohammed Fahmy case in Egypt, which is an area of law I’d ultimately love to work in.

Describe your experience with online learning. What do you like? Dislike?
What I like is the convenience. AU makes it so much easier to get where I want to go. There’s so much flexibility: if something is going on at work or in my personal life, I can work around it. What I don’t like is that It’s difficult to communicate with my peers. If I want to discuss something from a course, instead of bouncing it off other students, I have to go directly to my prof. That provides me with only one point of view.

Have you had a time when you wavered about your education?
About once a semester! I’m taking a full course load as well as working full time. I take 3 or 4 courses every 4 months, which has proven to be a bit stressful. When I approach the halfway point of my semester, I usually have a bit of a meltdown once the assignments start to truly pile up. But once I get a grade back on one of these papers, I find I’m motivated to power through that nasty period and get over it.

What was your most memorable AU course?
There have been a few memorable ones. Two in particular, CMNS 321, Computing in Everyday Life, and CMNS 421, Being Online, I found interesting. Both covered online behaviours and the psychological and sociological aspects of computing and being online.

If you won $20 million in a lottery, what would you do with it?
For starters I would pay off my student loans. Then I’d start a savings account to pay for law school. I’d also pay off my parents? mortgage, and I’d pay for my boyfriend’s university tuition?he’s at AU, too. And then I’d do some traveling!

What have you given up to go to AU that you regret the most? Was it worth it?
Mainly my social life. I don’t see my friends as much as I’d like too. This past year has been particularly difficult as two of my close friends have hit some major milestones, like getting married and having their first baby. I’ve been around for all the excitement, but not nearly as involved as I would have liked to have been. It has been worth it, thanks to their support, but I probably wouldn’t put myself in this situation again down the road.

If you were the new president of AU, what would be your first project?
I think it would be to work on the problem with tutors. Over the past two years of my undergrad, I’ve noticed a definite shift in tutor quality. Tutors seem to be overloaded with courses and students and can take quite some time in either grading assignments or responding to e-mails. The good tutors will always do their best, but there does seem to be a change in their ability to be there for students. The quality of tutor service is something that can make or break a student’s decision to take another course at AU or even to pursue a degree and I feel this will ultimately affect the school in the long term.

What’s your favourite sound?.
Music. I’m a pretty big music junkie. I like all kinds of music, especially alternative rock.

What is your most prized possession?
That’s a challenging question! I would say It’s probably my passport.

Please tell us something that few people know about you.
I am a pretty big computer nerd. I enjoy courses on computer and internet design. There’s such a complexity that is beyond the grasp of many users that I really enjoy.

What is the most valuable lesson you have learned in life?
You can only do so much to make everyone else around you happy; focus on your own happiness first. Those who are meant to be in your life will support you regardless of what you do.

What do you think about e-texts?
I’m torn on this. I’ve only had one course with e-texts, the rest have been paper books or PDFs. E-texts are convenient?with my iPad, I can read them wherever I am. However, reading off a screen I find really hard on the eyes. And It’s hard to flag e-texts for later reference.

How do you find communications with your course tutors?
Most have been really awesome and some have gone above and beyond what I expected. One noticed a post of mine on the course discussion forum regarding an assignment, and phoned me the next day to see if I needed help and talked me through the assignment itself.

Where has life taken you so far?
A little bit of all over. I’ve been to England several times, and also to France and Italy. My boyfriend and I have roadtripped down the west coast of the United States to California and back, twice. I’ve also been to Vegas, Hawaii, and on a cruise from Miami to the Bahamas.

What (non-AU) book are you reading now?
I’m reading A Clash of Kings, the second book in the Game of Thrones series by George Martin.