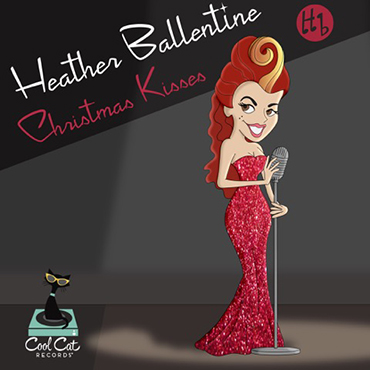 Looking for another new song to add to your holiday playlist? Then look no further. Heather Ballentine’s latest single is out just in time for Christmas.

Touted as “Music’s Favourite Pin Up Girl”, Heather Ballentine is an entrepreneur, singer/songwriter, pin-up model, and actress from Arkansas. In 2011 Heather moved to Toronto, where she is building her brand as a pin up model. Grammy award winning producer, Pete Anderson, and co-writer, Lary Bartley, have helped her create “The Cat’s Meow.” In March of 2015, the first single from that album, “Needle in a Haystack”, was released. Encouraged to listen to musicians like Elvis, Patsy Cline, Johnny Cash, The Everly Brothers, Roy Orbison, Wanda Jackson, and Buddy Holly as a child, Heather’s music is heavily influenced by these sounds. But audiences who like big band, swing, country, or even rockabilly will find something to like in the signature sound that she and Pete have created. “Christmas Kisses” is the bonus track from the album “The Cat’s Meow.”

“Christmas Kisses” is a lively and fun Christmas song. The song showcases Heather’s singing perfectly, with minimal instruments distracting from her grand vocals. The song begins with some light jingling bells that stop as soon as Heather’s vocals start. The country sound is very evident at times, but even though I am not much of a country fan, I still really enjoyed this song. The influence of Patsy Cline is very evident in “Christmas Kisses,” which is great because it means that this song has a sound that isn’t heard anymore. There is an easy classic feel to the song that is lacking in a lot of modern music today. With this relaxed feel, I can definitely see this song making it into the realm of holiday classics.

As well, be sure to check out the video as well. Produced by Grammy winner Pete Anderson, with animation done by UK’s Greg David, Heather came up with the concept for the video with her co-writer, Lary Bartley. Since the video is for the holiday season, Heather and Lary wanted to create something that the whole family could gather around and enjoy. The video is absolutely adorable and entertaining. From penguins with top hats to a reindeer band, and even Elvis himself, the video is sure to delight all ages.

Although “Christmas Kisses” is great for all of the family, the song is sure to be a crowdpleaser at all of your holiday gathers. As well, I think that this song is great to listen to while wrapping presents, decorating the tree, or writing out those Christmas cards.

“Christmas Kisses” is available on iTunes, and if you are a fan of Heather’s single, then be sure to check out the rest of “The Cat’s Meow.”