Articles
The Voice
Insolvency, Incompetence, and Other Indiscretions

I remember when the hiring freeze first started. The funding model wasn’t sufficient for AU to support all of its students. Positions started to be left vacant. And then came the massive provincial budget cuts. Layoffs, buyouts, and the elimination of vacant positions. Less staff at the university to assist students. Remaining staff beginning to burn out as they tried to help students succeed despite the voids in staffing support. Then more budget cuts.

It’s a grim picture, and for the past few years has caused rumours about Athabasca University’s demise to circle like vultures. University officials like then-Board Chair Barry Walker assured the media in 2012 that AU was “in a very sound financial position,” but as AUSU president at the time, I noted that these comments did not reflect the reality we were seeing. University assets have continued to be depleted, and executive salaries have skyrocketed. Faculty and staff email lists saw the circulation of graphics like the one below illustrating facts from some of the university’s financial statements.

Recently, the Alberta Government asked the university to produce a long-term sustainability plan. Interim President Peter MacKinnon chaired a task force to develop this report, which was presented to, and unanimously accepted, by the Board of Governors at their May meeting.

The Task Force report is 45 pages long, and on page 4, declares that “based on our most reliable assumptions, we project the likelihood of insolvency in 2016/2017.” Later, the report reiterates “the status quo is not an option. Without major remediation, our university faces the prospect of insolvency within two years.” Not that anyone should be alarmed right up front, but, you know, if nothing changes, the university will be broke and go under in two years.

“Position vacancies, workforce depletion, and other austerity measures,” introduced by the university over the past few years may have helped to “produce a surplus in an annual operating budget, but they are not contributors to financial stability over a period of years.” So eliminating 113 positions in 2013 might not have helped contribute to the long-term health of the university? How shocking.

“Our present circumstances and condition did not coalesce overnight,” the report continues, offering several factors which might have contributed to the current state of the university: “changes in enrollment demographics, operation funding, tuition policy?” and the list goes on. One of the key difficulties the report notes in depth, however, is funding: “from supporting about 80 percent of the operating budget 30 years ago, the government grant supports about 30 percent of our operating expenses today.” Another key difficulty noted by the report is staff salaries: “the sustainability of Athabasca University has been compromised by terms and conditions of employment” negotiated with AU faculty and staff.

The report does not at any point mention, however, the management of the university or its funds: one might think that this could be relevant, particularly given the university’s history of making illegal donations to political parties, and the previous motion made by faculty and staff unions to express their concern about the university’s leadership, and the highly inaccurate assurances made by the Board Chair that the university was in “a very sound financial position.”

In any case, however, the report lays out four main options for the university moving forward. They are as follows: 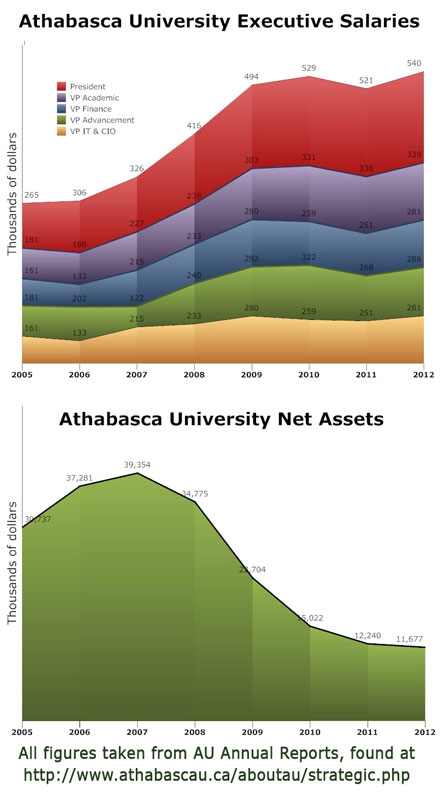 1) “A refocusing of the university” to “serve Albertans first”
Yes, the first major option put forward by the report is to limit access to AU courses by out of province students. In fairness to the university, this does have some very straightforward financial logic behind it: AU does not receive any government funding assistance for students who do not physically reside in Alberta. The report very bluntly notes that “AU has not benefitted” from out of province students, so “one option might be for us to serve only, or primarily, students physically resident in Alberta.” Students, ask not what your university can do to educate you, but what you can do to bring more dollars into the university.

2) “An emphasis on efficiency and effectiveness in course delivery and business practices”
Ensuring that the university is being efficient seems like a very good, straightforward idea. But after years of trimming spending at the university, it seems like it would take some very significant changes to create enough additional efficiency to move the university from insolvency in two years to a healthy financial state. The report suggests that “each teaching program” be evaluated “from the standpoint of costs.”

Apparently the cheapest programs to run are those that the university will strive to save, regardless of whether or not they are necessarily the best academically? I can only assume that this is another sign that the university administration has not given up on the idea of rolling a so-called “call centre” model across the holdout Faculty of Humanities and Social Sciences, despite concerns raised by students and academics about this change.

3) Federation with another Campus Alberta Institution
A merger has also been long-rumoured. The report suggests that “terms and conditions” of a merger would have to be “negotiated between the two institutions and with the Government of Alberta,” but comments that because “geographical proximity is desirable,” an Edmonton institution would be “an obvious possibility.”

While it is alarming to think of AU being subsumed into another university, this could be among the least-bad options put forward in the report, if key aspects of AU’s course and program delivery could be maintained through negotiations. AU students currently have unparalleled flexibility in start dates and program completion timelines, as well as the option to extend courses when life intervenes in their study schedules. These options need to be protected. AU’s open admissions policy would also have to be retained. And most importantly, I would hope that AU students would always continue to receive personal academic assistance from qualified scholars (our tutors and faculty).

4) Affiliations with other institutions and organizations in Campus Alberta and beyond
This option is a delightful diversion from the rest of the report, noting that if AU could effectively fill gaps within Alberta and Canada’s online learning framework, “it could attract important affiliations with organizations such as Google, Mozilla, and Microsoft.” Because if we pray hard enough, the Great Google Gods will not only help us with research, they’ll also fund our university. I want to believe this dream. But you know that saying about things being too good to be true? It seems like this could be one of them.

The Presidential Task Force report notes that the above options will be evaluated according to four assessment criteria: “strategic (e.g. fit with mission); financial (operating and capital costs); compatibility with stakeholder expectations, and efficacy of implementation (time and likelihood of success).”

Interim Board Chair Marg Mrazek told Convocation attendees that AU would “be working very closely with government to further look at the options set out in this report,” as the “options that are set out in the report need to be acted upon now if long-term sustainability is to be achieved.”

In response to the report, AU’s three employee unions have issued a joint press release stating that “the government needs to examine the financial management and decisions made in recent years.” President MacKinnon, meanwhile, has offered assurances to the media that despite talk of insolvency, “Athabasca University is not going to close down.”

MacKinnon also issued a release of his own citing inaccuracies in the union pressers and noting his disappointment with the timing of the release, saying “the unions chose to divert the spotlight away from our students on the very day set aside to mark their success.” ***

The report is, on the whole, a dark document forged from dark times at Athabasca University. It is not entirely without merit, though. Part of the report’s conclusion notes that “Alberta needs Athabasca University ? We can help our province by persevering in our present mission and growing our potential to offer post-secondary opportunities to those who might otherwise by obliged to forego them.”

AU was created by the Province of Alberta to help provide exceptional quality post-secondary education to all people, regardless of their respective (social, cultural, economic, educational, and what-have-you) backgrounds. This is a mission that, despite chronic government underfunding and questionable management, AU continues to achieve. Alberta’s new NDP government (led by former AU tutor Rachel Notley) would do well to consider the benefits that AU provides to Alberta, and fund the university accordingly.

***As an AU student and alumna, I have been privileged to receive excellent support from AU’s academic community. Faculty, tutors, and support staff at Athabasca University consistently demonstrated concern for my well-being as a student. They helped me reach my goals, and they celebrated my successes with me. If these academics and staff feel that an issue is important enough to voice at convocation, I am interested in hearing their concerns. I do not feel that this diminishes my achievements as a graduate.
I was, however, moderately revolted by the plea for cash included in interim board chair Margaret Mrazek’s opening remarks to graduands at Convocation: ?I would like to encourage you to give back to your university… We will be tapping on your shoulders in the future and asking you to work with us to ensure that others have the same opportunity that you have had.? Dr. MacKinnon’s release recognizes that some grads ?overcome incredible obstacles to walk across the stage and receive their degrees.? Is it, then, truly necessary to turn around and ask these same grads to hand over more cash?

Discussions of AU’s financial situation are always relevant and interesting to AU students (and if they’re not, they probably should be). This year it was made especially so because of the release of the report that Bethany Tynes examines in this article that The Voice printed in June about the possibility of AU going insolvent. I also liked it because it introduced me to the word “alumna”. Did you know that there’s a gender difference in the singular of “alumni”? Hey, I’m an English geek, these things are cool to me. 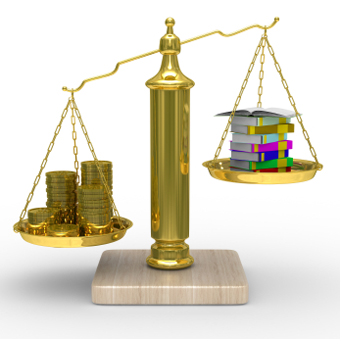