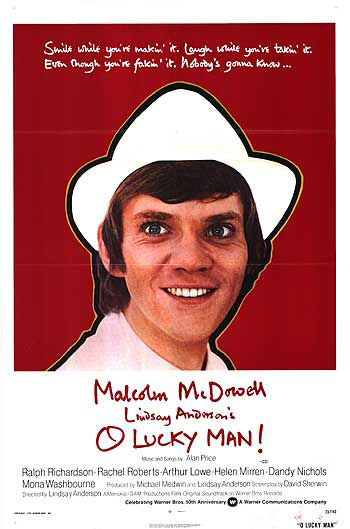 “The problem for us is not are our desires satisfied or not. The problem is how do we know what we desire.”
– Slavoj Zizek

“Keep you doped with religion and sex and TV,
And you think You’re so clever and classless and free,
But You’re still fucking peasants as far as I can see.
A working class hero is something to be.”
– John Lennon

You’ve known a Mick Travis, at least, if you’ve ever worked at a “real” job (i.e. a meaningless, soul-sucking attempt at survival). Mick Travis is that guy who thinks he’s in a Horatio Alger, Jr. story’so optimistically ambitious that he’s willing to do anything, believing the outcome will be marvelous. A naive, slightly obtuse company man who’s so motivated and positive that he must deliberately turn a blind eye to the crimes of his superiors and his own role in perpetrating them.

In O Lucky Man! Mick Travis, played superbly by Malcolm McDowell, works for a big coffee company (with the significant title “Imperial Coffee”) in Northern England. Because his boyish good looks have caught the eye of a female CEO, he’s chosen for a special mission to drum up sales across the country. On what looks like a typically epic hero’s journey Mick encounters corruption, danger, love, and moral dilemmas.

If you haven’t already guessed, Travis is symbolic not just of the oppressed proletarian, but of that segment of the proletarian class which has been successfully hoodwinked into thinking it can one day have a piece of the pie. The impoverished third world coffee grower, featured at the start of the film, who gets his hands cut off for stealing a few beans, doesn’t have this luxury.

For their part the industrialists of the wealthy nations don’t have the luxury of cutting off workers? hands; they must instead brainwash them into thinking that their government cares and then fill them with the desire for consumer goods that quickly become fetishized into household gods. The whole of Western culture, here presented in allegorical form, conspires to blind the poor working man to the desperation of his plight.

There’s one telling scene in which Mick, stumbling along half dead from his latest catastrophe, finds a beautiful autumn country scene with a little white church. It’s harvest time, and so the church is surrounded by happy children and piles of root vegetables. He staggers into the empty church, falls upon the laden altar, and begins eating an apple. A woman approaches and admonishes him gently: “Oh no, you can’t eat that?That’s God’s!” but when she sees his sorry state she feels badly for him, kneels down, takes out her breast, and nurses him.

In the next scene Mick, fully revived, is happily waving her good-bye as he skips off to continue his business mission.

You can’t miss the message: In capitalism’s ubiquitous grasp, even the church is used as a tool for placating misery and keeping the lies alive, sabotaging its rightful role as a challenge to the sins of big business.

In case this is starting to look like Marxist propaganda, there’s a line scrawled on a wall?”Revolution is the opium of the intellectuals”?that belies any suggestion that communism might be the answer.

The unique achievement of this film is that the idea is so carefully annunciated while presented in such a delightful fantasy, one that impresses itself on the imagination hard enough to inspire new creativity.

Here’s a spoiler alert, but It’s so relevant I have to say it. In the next to the last scene Mick finds himself, after a harrowing series of events, auditioning for a film role. The director tells him to smile, but he repeatedly refuses, eventually saying that there’s nothing to smile for.

He’s finally faced the truth about life, humanity, and moneymaking machinery, and he’s not happy about it.

The director then smacks him across the gob with a heavy script and repeats the command: “Smile!”

Mick slowly smiles, the light of understanding flooding his face. It’s at this point that he achieves enlightenment.

O Lucky Man! manifests nine of the Mindful Bard’s criteria for films well worth seeing.
– It’s authentic, original, and delightful.
– It poses and admirably responds to questions that have a direct bearing on my view of existence.
– It stimulates my mind.
– It harmoniously unites art with social action, saving me from both seclusion in an ivory tower and slavery to someone else’s political agenda.
– It’s about attainment of the true self.
– It inspires an awareness of the sanctity of creation.
– It displays an engagement with and compassionate response to suffering.
– It renews my enthusiasm for positive social action.
– It makes me appreciate that life is a complex and rare phenomena, making living a unique opportunity.

From Where I Sit – Top Ten

Write Stuff – It Ain’t Your Cloud