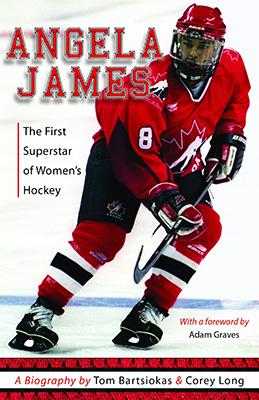 Angela James: (December 22, 1964) is a Canadian Hockey Legend who became one of the first women inducted into the Hockey Hall of Fame. She was often referred to as the Wayne Gretzky of Women’s Hockey.

As a young girl in Toronto, Angela grew up loving hockey, although she had a hard time finding a team that would allow her to play as, at that time, women were scoffed at for attempting it. Angela persisted, and while attending Seneca College excelled in hockey and softball, winning several awards. In 1992 she played for Team Canada in the first women’s championship, where they earned a gold medal. She continued to play in four more world championships, during which time she received eight MVP awards. In a contentious decision she was excluded from participating for Canada in the 1998 Winter Olympics. Ultimately, Angela had her jersey (#8) retired.

Angela continued to be honored with several awards and, in 2010, was one of the first of three women welcomed into the Hockey Hall of Fame. This was only made possible as a result of a 2009 amendment to the by-laws allowing women to be accepted.

Angela has received many achievements and is currently a sports coordinator at Seneca College in Toronto, as well as owning the Breakaway Adult Hockey School. Below are a few of the many links available for further reading on Angela James.