Columns
The Voice
The Mindful Bard – Wings of Desire 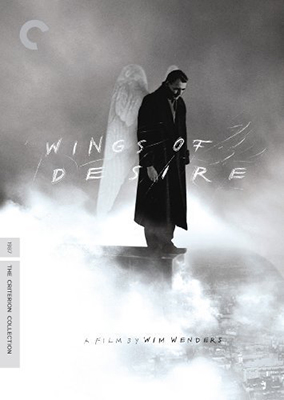 “Loneliness means: I am whole at last!”
– Wings of Desire

Wings of Desire is one of those films that amazes by its very existence, so far is it from all the conventions of the movie world. At the same time one can’t deny its epic look, the cinematography reminiscent of Citizen Kane, Metropolis, and several other great early films.

The film begins in black and white, following two angels, Cassiel and Damiel, who look like elegantly dressed literature professors, as they wander across West Berlin, reading people’s thoughts and occasionally meeting to exchange notes on what they’ve seen.

Damiel, after having observed Berlin’s changes from prehistoric times, now wants to be affected, worn down, and wounded by circumstance. He longs for the precious burden of the mundane, the wondrous plainness of the moment. He confesses to Cassiel: “I wish I could grow a weight which would bind me to earth. I wish I could say, at each step, at each gust of wind, ?now.? Say ?now? and ?now? and no longer ?forever? and ?for eternity.?”

Marion, the trapeze artist, wishes to escape the now. She assures himself, “Time heals all,” but goes on to ask herself, “But what if time were the disease?” Her question shows a desire to escape an endless procession of events that never seem to work out in her favour. Her refusal to use a net during her trapeze act suggests a death wish inspired by the grandiose suffering of humanity and the disappointment of her own life.

It’s not as if Damiel and Marion are simply looking for greener pastures. And It’s not as if either of them are needy; each one is profoundly complete and profoundly solitary, she as human, he as angel? which is why they fall in love; they both need a broader context in which to live out true selfhood.

A beautiful subplot features Peter Falk as himself, acting in a film set in the concentration camps of Nazi Germany. Peter Falk, who through his role as Columbo practically created the archetype of the ingenious despised, was formerly an angel himself in the film. He explains to Damiel, even though he can’t see him, why living in the now is so marvelous. “I wish I could see ya. Just to look into your eyes and tell ya how good it feels to be here,” he says.

The human beings in Wings of Desire are missing a significant aspect of reality. But then so are the angels. The resolution is for one to join the other. Marion courts the transcendence that Damiel wants to escape. She wants to know. He wants to feel. The longing to feel and grow and die is the only feeling he has, born of millennia of observation. Her longing to know the sacred is the quality that drew him to her.

“At last It’s becoming serious,” says Marion on first meeting Damiel in his human form. Contact with the sacred, after living the existential absurdity of earthly life, brings her the substance of a reality that She’s sought all her life.

It’s been said that the divine is not so much like a man or a woman as like a couple making love. Perhaps this is why, when Damiel becomes human, the film changes from black and white to colour.

“There is no greater story than ours?that of man and woman,” says Marion.

Wings of Desire manifests eight of the Mindful Bard’s criteria for films well worth seeing.

– It’s authentic, original, and delightful.
– It poses and admirably responds to questions that have a direct bearing on my view of existence.
– It stimulates my mind.
– It provides respite from a cruel world, a respite enabling me to renew myself for a return to mindful artistic endeavor.
– It’s about attainment of the true self.
– It inspires an awareness of the sanctity of creation.
– It displays an engagement with and compassionate response to suffering.
– It makes me appreciate that life is a complex and rare phenomena, making living a unique opportunity.

The Mindful Bard – Land of Plenty