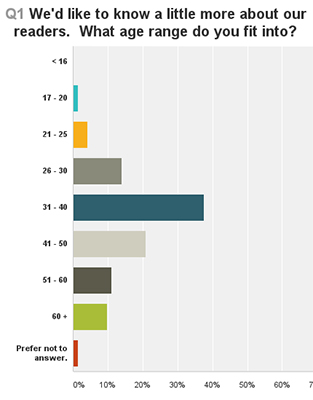 So, the Voice Survey is closed. If you’re one of the ones who entered the contest, the draw has been made, the emails sent, and I’m just waiting for confirmation from the winners before I announce who they are. If you haven’t recently, please check the email address you gave to the Voice Survey. If there’s nothing there, sorry, but thanks for filling the survey out!

But what did the survey tell us?

Well, first, it told us that the bulk (almost 40%) of you who read the Voice are between 31 and 40, with the rest forming a bell curve skewed toward higher age ranges. In fact, over 10% of Voice Readers are over 60, while only about 5% are in the “standard” university demographic between 17 and 25. Which means that most of our readers are actually hitting their prime earning potential, take note, advertisers!

Also, most of us don’t have any dependants or kids in the house, Almost 60%, in fact. Of those that do, however, almost half of them have two.

And economic downturn? What economic downturn? Over half of us are employed full or part-time, with another 14% being self employed. Only 1% of the people who filled out the survey said that they were seeking employment. To you folks, best of luck, hopefully you’ll find something soon that suits you.

While over 70% of the readers are undergraduate AU program students, as expected, what surprised me was that just over 8% said that they had no connection to AU. I find that both encouraging and confusing. Encouraging that we’re reaching people outside of the AU community, but a bit confusing as to why. Personally, I’m going to take it as a win that we’ve got readers who just show up because they like what we’re putting out.

We also found out that over half of the readers read it every week or quite frequently, and that the main reason people decide to read The Voice Magazine (over 40% of the answers) is if something looks good in the weekly email. So no pressure for me at the end of the day, nope, none at all.

However, few of us, just over 5%, read it from cover to cover. Over half of us will skip some of the main columns or articles if they don’t look terribly interesting. Fortunately, though, the number that skip most of the magazine is only around 13%. 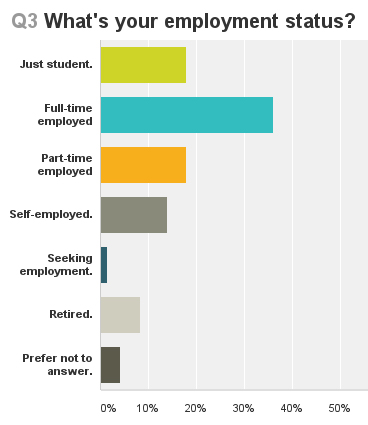 As to how we read? Almost 2/3rds read the web version, to which I have to say I admire your dedication, people. The site was first built over a decade ago in 2002. Then in 2008, the front cover was added (it used to be you started directly at the table of contents, but that had no graphical appeal at all), so I’ll be the first to apologize for the interface you’re using. (And in fact, complaints about the web interface featured prominently in some of the free-form comments). The other third of you make use of the weekly PDF, and enjoy the lovely layout job I do each week and the increased graphical fidelity.

Oh, and when it comes to reading the PDF, I do realize (now) that I messed up the logic in the survey. I had a question in there for those who print off the PDF asking them why they choose to do that. Unfortunately, that question got asked to anybody who didn’t answer that they mostly used the web version, whether they printed it off or not. My apologies, folks!

Then we get the big questions. What articles do we always read? Just under 5% of you pointed out that I had neglected to offer a “none” option, while 3% or so pointed out that I had also neglected to include any of the reporting we do on AUSU or AU activities. All of these things will definitely be included the next time we run one of these surveys.

What was the most popular however? Over half (just over 56%) of you who filled out the survey say that you always read the “Minds We Meet” profiles of other AU students. And the same percentage for my own editorials (Being able to put it at the top of the table of contents has its privileges, I guess). Following that came our series interviewing AU educators, “Meeting the Minds”, and then Hazel Anaka’s long running column “From Where I Sit” was tied with our much newer column “The Study Dude”. So our top three positions hold five different articles.

When I asked what you’d like to see more of in The Voice Magazine, in a question that allowed you to weight all the options as you like, a couple people informed me that, contrary to what I stated in the question, the answers did not automatically adjust their position based on the numbers, depending on the browser you were using. That will also be kept in mind for future as well. However, the answer that got the most “weight” turned out to be Personal reflections of AU students, closely followed by articles about AU programs and activities, then AU students in general, Advice on Writing, and then about AUSU programs. You can see from this issue that we’re already working on getting more of that kind of information out to you. 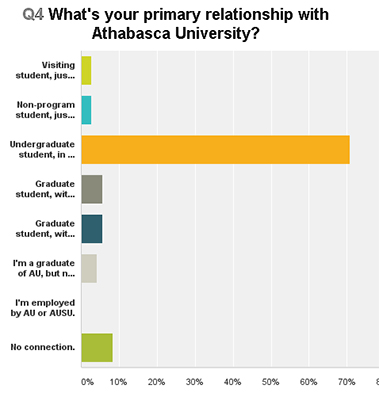 Also, most people (nearly 60%) are happy with our once/week schedule and the plurality (26%) think the number of articles are fine, with those wanting more or fewer articles being fairly evenly split. But overwhelmingly, 93% feel that the length of articles is fine.

When it comes to other media, just over 29% think that AU should have an online radio station, while just over 35% think we should not, with another 10% suggesting it depends on various things, primarily what’s on it, or if it would be put out as a podcast (which was preferred), rather than a streaming station.

Meanwhile, 33% think The Voice should expand into audio or video media, 22% think not, and 32 have no opinion. From the comments, though, any expansion should just be supplemental to the printed material, not replacing it.

Phew. I’m still also going through the free form comments, many of which are telling me that the website needs to be updated, and a number of which really emphasizing the importance of getting more news about what’s going on at AU. All of which is going to be kept in mind for future issues and for what I push Voice Magazine writers to seek out. 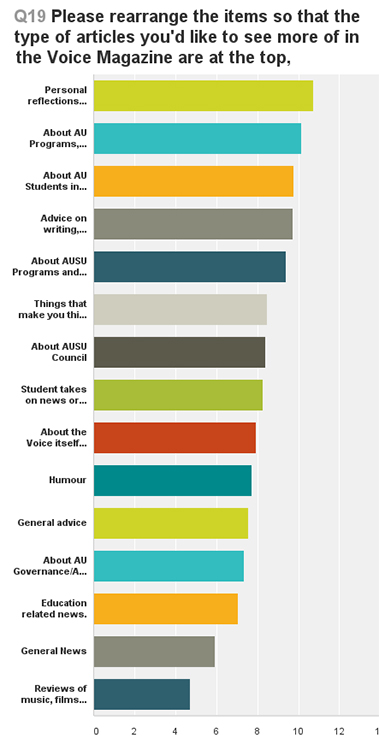 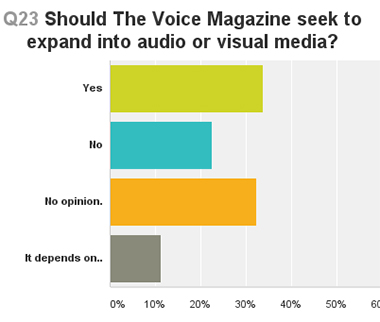