Columns
The Voice
The Mindful Bard – The Ruling Class 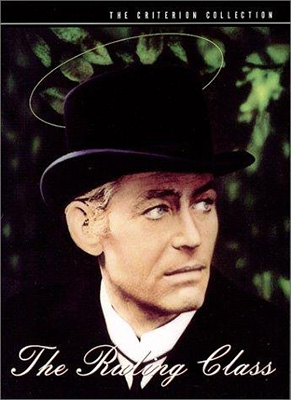 LADY CLAIRE GURNEY: How did it happen? How did you come to be in this state?

JACK GURNEY: Like every prophet I saw visions, I heard voices, I ran. The voices of Saint Frances, Socrates, General Gordon, and Timothy Leary, they all told me I was God. It was Sunday, August the 5th, at 3:32.

JACK GURNEY: If only I knew then who I am now.
– quotes from The Ruling Class

If Citizen Kane is noted for being the film where every still could be framed and mounted as a photographic masterpiece, The Ruling Class should be known as the film in which every line is quotable gold.

This film deserves much more than the cult following It’s garnered over the years. It’s not easy adapting a play, even a brilliant one like this, but the film is a work of art unto itself, the kind of thing you can return to again and again, replaying it in your mind as You’re dropping off to sleep.

At the same time, It’s incredibly entertaining. Peter O?Toole in the role of the psychologically imbalanced Jack, 14th Earl of Gurney, is deeply engaging, every gliding movement of his lanky frame better than ballet, his every utterance pure poetry spoken by an ancient Greek statesman.

Jack’s delusions come and go, shifting with the tide of external events. He starts out the film believing he’s God, becomes nervous when doubt is cast on his assertion, and shows a brief (and heartbreaking) return to sanity before shifting into the delusion that he’s Jack the Ripper.

It’s important to note that in his God of Love delusion he’s completely at odds with his upper class family, who desperately try to manipulate him to further their own ends before tossing him on the psychiatric dung heap. But when he shifts to believing he’s Jack the Ripper, the family and the village heartily endorse his sanity, and all the way to the House of Lords he’s lauded as a man who exemplifies the very flower of British aristocracy.

Jack’s father, a pillar of the ruling class, had been found dead hanging from the ceiling wearing a tutu, a military dress jacket and feathered hat. It was an accidental suicide at the end of a bombastic session of play-acting that was supposed to have been enhanced by the constriction of his carotids.

It’s clear that the Bolshevik Butler Tucker is right when he asserts that the whole family, the whole class, is mad, so why pick on one man?

By far the most brilliant lines are those spoken by Jack while believing he’s God, such as:

The Ruling Class manifests eight of the Mindful Bard’s criteria for films well worth seeing.
– It’s authentic, original, and delightful.
– It poses and admirably responds to questions that have a direct bearing on my view of existence.
– It stimulates my mind.
– It provides respite from a cruel world, a respite enabling me to renew myself for a return to mindful artistic endeavor.
– It’s about attainment of the true self.
– It inspires an awareness of the sanctity of creation.
– It displays an engagement with and compassionate response to suffering.
– It makes me appreciate that life is a complex and rare phenomena, making living a unique opportunity.

Lost & Found – Some Applause for the Aristocrats