Columns
The Voice
In Conversation with Jack Berry 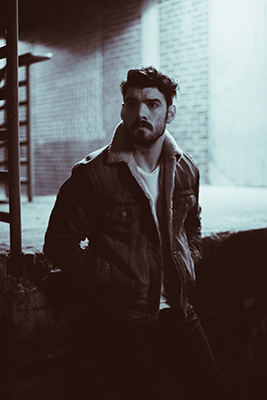 Jack Berry is a Nashville-based blues guitarist and singer noted for producing music that’s deeply rootsy yet informed by new and original musical sensibilities, sometimes described as “alternative blues” and “wild bunch blues.” Berry has just released the single “The Bull” from his soon-to-be-released album, Mean Machine. Recently he took the time to answer Wanda Waterman’s questions about what brought him to where he is now.

Until hearing your music, I hadn’t found anything that I thought deserved the label “alt blues.” How do you remain so true to the essence of blues and hard rock while injecting the perfect amount of weirdness?
I’ve been noticing quite a few different genre placements and artist comparisons and I’m always intrigued because I don’t ever set out to sound a certain way. I suppose I try to convey a certain conviction and color and those in turn leave connections.

For instance, I’ve never tried to translate the emotion that, say, an Elmore James song gave me, because to me he’s captured the best version of that feeling for the song. But my respect for traditional blues opens my ears and eyes to the resemblance of James to a Zeppelin track. From there I might notice a guitar riff from the same ballpark in a Rage Against the Machine song. I’m just tracing through music that strikes a chord (pun intended).

What was your most beneficial educational experience?
Failure. Constant and relentless failure. Those moments where you sulk and break in juxtaposition to the days where life is just pretty normal, those build-ups and breakdowns you can literally hear in my music. I don’t have any music training outside of my own listenings. I’m self-taught in both music and life, and with that there’s a lot of screw-ups and a lot of unorthodox approaches. Just keep fine-tuning.

What was the most mesmerizing musical experience of your life?
I was at a festival in Napa. Ben Harper was playing, and I was supposed to leave the stage early to migrate to another stage where Kings of Leon were to catch the end of their set. I turned my back to get going and this most familiar drum and harmonica combination I have in my head fired up behind me. Ben had Charlie Musselwhite with him and they were busting out “When The Levee Breaks.” I’d never seen this song live and it’s one of my favorite songs. I think I watched the whole thing with this shit-eating grin and missed the Kings’ set.

What’s your favourite instrument to play and why?
Guitar was always most accessible to me and there’s so much left to it I have to give, but I loathe every day that I can’t play drums.

What influence, positive or negative, has Nashville had on the development of your sound?
When I came here a few years ago I knew I was going to be an underdog musically. These cats here are masters of their instruments and technique. An interesting thing happened to me where I was told to listen to shit I’d never heard of because the shit I had heard of wasn’t cool? this other stuff was cool.

I found a bit I liked, but what I really discovered was after a time I began to think, “Screw you?I still like this ’uncool’ shit, so it’s cool to me garsh dammit.” It solidifies where you stand. If you aren’t playing music you believe in, go write some god-awful bro country song – you’re just after an image not a sound.

How do you get yourself psyched up for stage performances?
Whiskey.

What conditions do you require in your life in order to go on being creative?
I believe complacency is my kryptonite. I need to constantly being climbing up hills just to face-plant back into mud to feel alive and creative. Make the going up worth the coming down.

What do you feed your muse? Are there any books, films, or albums that have deeply influenced your development as an artist?
I love western novels and movies. Cormac McCarthy, Lee Van Cleef, Ennio Marricone?that type of thing. Hands with blisters and guts with holes.

If you had an artistic mission statement, what would it be?
Make the truth so everyone wants to hear it.

Tell us about your current projects.
Mean Machine is due out in April. The single “The Bull” and one other will be released beforehand. It’s a fistfight in church.

What’s next for you?
Touring my ass off.

Do you have anything else to add?
Drink your Ovaltine.