Columns
The Voice
In Conversation with Fable Cry 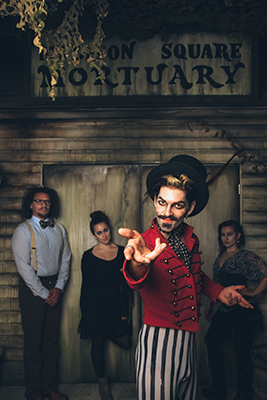 Fable Cry bills itself as a “theatrical scamp rock quintet,” but that doesn’t say the half of it. With a weirdly spooky aesthetic and a devotion to all things bizarre, bandmembers share a deeply rooted fascination with the things of the imagination and express it superlatively on stage and in the studio with a gypsy-punk-cabaret look and sound. They’ve just put out their second album: we’ll Show You Where the Monsters Are (Watch the “Fancy Dancing” video here.)

The group is now based near Nashville, Tennessee and comprises founder and lead vocalist Zach Ferrin, cellist Joshua Dent, violinist Jo Cleary, bassist Scott Fernandez, and drummer Rachel Gerlach, who recently answered Wanda Waterman’s questions about her own musical journey and what It’s like working with Fable Cry.

Describe your musical background. What role did music play in your childhood?
My family is quite musical and has always been supportive of my creative endeavors. I began piano as a toddler, learned from my mom, and played mostly by ear. I began drums at 13 and jammed with my brother, who was learning guitar.

Then I was in quite a few varieties of bands over the years: Punk, Indie, Metal, Rock, and a mix of whatever genres they probably don’t have a name for. My brother and I rejoined forces years later to create The Rocketblaze Holster, which was a mix of Deftones, Mars Volta, Tool, and Modest Mouse, I guess. Very interesting and fun.

What I like the most about playing for Fable Cry is the fun of it. It’s all wild and in odd time signatures, and some spots leave you hanging on the edge of your seat.

What or who in your musical training had the most? and best? influence on you, as a musician, a composer, and a human being?
Will Goldsmith from Sunny Day Real Estate as well as Weezer were my first inspirations early on. I was a highly stubborn and a determined-to-do-things-my-way type of person, and I still am. So I play how I want since drumming is my form of creation, where I feel totally connected within my being. I may not be a technical drummer, but I’m definitely a passionate one. So I guess I am my own inspiration?

What was the most mesmerizing musical experience of your life?
Watching Pink Floyd’s Live at Pompeii for the first time on a projector outside.

How did you all find each other?
I was hired on at Sam Ash music and a few weeks later they hired Joanna (the violinist). We would speak in animal calls, purrs, hoots, and goat bellows, and we totally understood each other. A kindred spirit!

A few weeks later she invited me to see her new band’s show, and I loved it! The drummer was quite heavy-handed though (wink). Then she tells me they’re losing their drummer and I immediately say, “I’ll play!” Zach met me and we jammed and That’s all she wrote from there.

Has anything funny or bizarre ever happened to you while in the recording studio or on the stage?
Aside from the aforementioned burps and farts that continue onstage, we had our Halloween party at Ford (our engineer)’s house and the fog machine was off the chain and I couldn’t see, not to mention couldn’t hear because the PA was next to nothing, and our skeleton dancing girls decided it was a good idea to smear everyone with glitter? not sprinkle, smear!

Keep in mind I was rocking out hard, and I close my eyes when I’m in the zone sometimes, and these girls start grabbing at my face from in front of my high hat and behind me! I just about whacked them in their faces for freaking me out and almost messing me up! Not mad about it though.

What’s it like to be so nonconformist in a city like Nashville? Does the city help or hinder the muse?
Nonconformist by nature so it doesn’t change me wherever I am.

If your band’s life were a movie, what kinds of scenes would make you laugh? Or cry?
Cry with laughing tears of hilarity! The antics are unpredictable!

What conditions do you require in your life in order to go on being creative?
Breathing . . . eating . . . sleeping, and repeat. I think I’m always being creative in my mind.

What do you feed your creativity? Are there any books, films, or albums that have deeply influenced your development as an artist?
My imagination is quite vivid! I go inside my mind and the creativity is always there.

If you had an artistic mission statement, what would it be?
To inspire all to live in the fullest expression of their inner divinity in whatever art form they like.

Do you feel that artists have an obligation to straighten the world out a little?
I think musicians have been the foundation of finding or losing one’s sanity since the epoch of musical expression. The world should become more musical and then it would all straighten itself out naturally.

What do you think Donald Trump would have to say about your music?
Who gives a flying f*ck what that ass hat thinks? Not me.

Tell us about your current and upcoming projects.
Playing SXSW and going on an East Coast romp!

Do you have anything else to add?
Blaggle wah arrrrrrgh goo gob gob gobbity glob glob blob pppppbbbbbtttttt! 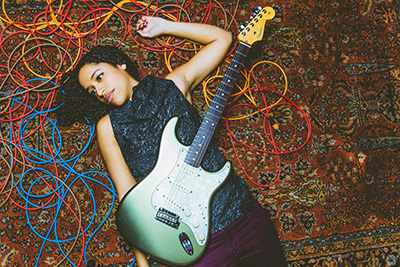