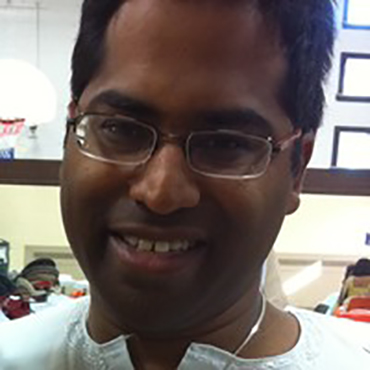 The following interview features Dr. Shandip Saha, professor of Religious Studies courses in the Center for Humanities at Athabasca University. His research speciality is in the field of Hinduism with an emphasis upon tracing the religious culture of Medieval India (15th to 18th centuries)

Please fill us in on the range of course you have taught or designed at Athabasca.
Dr. Saha: I’m the course coordinator for four courses at the university. These courses are Introduction to World Religions (RELS 204), The Islamic Tradition (RELS 206), Religion and Popular Culture (RELS 218), Death and Dying in World Religions (RELS 211), and Advanced Studies in the Hebrew Bible (RELS 380). All of these courses have under gone some form of revision to keep them up to date with the exception of RELS 211 which was opened in January 2016.

What were some of your childhood passions?
Dr. Saha: Goodness. That’s difficult to answer. Being raised in a family where drama and music were a very big part of growing up, reading voraciously was a major hobby for me growing up as was listening to Indian classical and popular music through commercial recordings, public concerts, and the occasional private concerts that were held in our family home.

I also used to play soccer in an amateur league until I was 18 and I do remember watching an inordinate amount of television like the Little Rascals, Merrie Melodies, Spiderman, and this now-little remembered French-Canadian television kids? program called Bibi et Geneviève. I always found Bibi ? the little green alien on the show ? to be most amusing and I still love watching the episode clips on You Tube.

If you could instantly learn one thing in its entirety with no obstacles and no time constraints, what would that one thing be?
Dr. Saha: Now, That’s a tough question. I would like to learn a few more languages. I want to learn Gujarati because it would be extremely useful for the research I do, but I really would love to learn Classical Persian instantaneously because it would give me access to a large body of sixteenth century material from Northern India that would help me to delve more deeply into my research area: the religious culture of Medieval Northern India.

If you had omniscience, what book would you write?
Dr. Saha: I think I would probably write the single-most definitive game-changing account of the history of religious communities in Medieval Northern India. In India right now, the Hindu right?with the quiet encouragement of the India’s reigning government?has hijacked public and cultural discourse in India, in an incredibly shameful way, to marginalize and stigmatize religious minorities. This has come in the form of religious violence, literary censorship, and rewriting history textbooks to reflect the Hindu right’s version of Indian history. This politicization of Indian history by both the right and left in India has somewhat distorted our understanding of the time period between the 15th and 18th centuries when Northern India was undergoing some major socio-economic and cultural transformations that still shape the very nature of Indian culture today. There is a lot of fantastic specialized studies out there that are trying to take a more nuanced approach to India’s medieval past, but I want to write one book, which, from an interdisciplinary perspective, brings out the complexity, and tensions that shaped Northern India’s religious culture during the medieval period.

What is your greatest purpose in life?
Dr. Saha: Well, I really believe that we are all incomplete as human beings if we don’t have a sense of compassion and humility. None of us are greater or lesser than the other and while we do have a responsibility to look after ourselves and our needs, it cannot come at the expense of others? physical, material, and emotional well-being. So, if you were to ask me about what is the meaning or purpose of life is, it is to try to live a life of kindness, compassion, and humility by sharing in the happiness and sorrows of others and by trying to make their lives better and not worse. I am acutely aware that I have fallen very short of embodying those values, but trying to cultivate humility, compassion, and kindness in life is really important to me.

What is your favourite hobby?
Dr. Saha: Music without a doubt. I love listening to Ella Fitzgerald, Frank Sinatra, and Billie Holiday but my life has been shaped by listening to genres of classical and semi-classical music from North India which I was raised with as a child. The texts that form the core repertoire of North Indian Classical music are grounded in genres of devotional and secular poetry that date back to the medieval period, and this music has given me a lot of happiness and spiritual support over the years. There isn’t a day in my life when I don’t listen to some of that music and think about the texts that make its repertoire. Now, I make a living studying this type of poetry as an academic.

Tell us about one of the most memorable things that has ever happened.
Dr. Saha: Oh! Goodness. I don’t know why, but for some reason, what comes to mind is something that happened to me when I as fourteen and growing up in Ottawa. My music teacher then was of the Sikh faith and she wanted me to see this very well-known Sikh devotional singer named Professor Darshan Singh Ragi, who was giving a private concert at someone’s house with his small entourage of musical accompanists. This artist has made his career singing the hymns from the Sikh holy book, the Guru Granth Sahib, which was compiled in the sixteenth century by the fourth of the ten Sikh holy teachers (gurus). I was familiar with the style of singing because my music teacher had taught me to sing some of these devotional compositions, but I really was not that enthusiastic about going. I did eventually go and when I sat down with my music teacher to listen to him sing, it was unlike anything I had ever heard. I?like everyone in else in the room?was just mesmerized by the intensity and beauty of the singing. It was really one of the defining spiritual moments for me and, as a music lover, it was the first great musical experience I ever had.

I knew this singer had made a commercial recording in 1980 of one of the devotional compositions he sang in that gathering I attended but it proved very difficult to find a copy of the original long play record. It was during my grad school years in the late nineties that I finally found that particular song on a compilation CD of the singer’s early recordings. I was just over the moon and I now I have a digitized copy of the original 1980 long playing record. I will also say that it was this concert I attended as a teen that marked the beginning of my longstanding love for Sikh devotional singing known as Gurmat Sangit, or the performance of Sikh devotional hymns according to the rules of Indian Classical music.

Who is the one most influential person in your life?
Dr. Saha: If you asked someone like a musician, artist, or writer in India that question, they would always say that their success is due not only to the blessings of whoever they believe to be absolute reality, but also to the blessings of their teachers and parents. I certainly share in that belief without hesitation, but I have to reserve that position of the most influential person in my life to my grandmother.

When my grandmother lived with my family in Ottawa where I grew up, she taught me about Indian history and Hinduism, and every morning she would teach me how to read Bengali before I left for school. She also read to me stories from different world mythological traditions, and she even read Bible stories to me. Her favorite story for some reason was the Abraham-Isaac story from the Hebrew Bible. I only came to know after she passed away that she did a course in comparative religion at the University of Saskatchewan in Saskatoon where I was born.

My grandmother also taught to me the value of regular meditation. She would get up, without fail, every morning at 5:30 am every day and would meditate for an hour in front of her altar where she kept her images of various Hindu deities and saints. When she moved back to India permanently, I think around the late 80s, she wrote me a letter when I started university saying, “Your studies is your spiritual discipline.” In other words, by studying and engaging with the diversity of the world, you can feel the presence of whatever one calls absolute reality. I take that very seriously when I am writing a new course or when I am writing an academic publication. Academics really is a kind of spiritual discipline for me so, my courses and scholarship always have to be solid, coherent, balanced, and grounded in intellectual integrity. There can never be any ifs or buts about that.

My grandmother passed away in 2000, but I still remember what she said to me about the nature of academics when I begin to write a new paper. She is also just a part of my everyday life in many different ways. I still listen to her favorite recordings of devotional poetry, a lot of her books in English and Bengali are still in my possession, and, most importantly, I have a watercolor of the Hindu god Krishna in front of which she did her morning mediation. It originally belonged to my great-grandmother, who then gave it to my grandmother, and now that picture is with me. I am extremely aware that whatever good I have achieved in my academic life so far is not only because of my own efforts. I have been extremely fortunate to have had the support and encouragement my family and university teachers over the years, but I have never forgotten that the person who really set me on this path has been my grandmother. 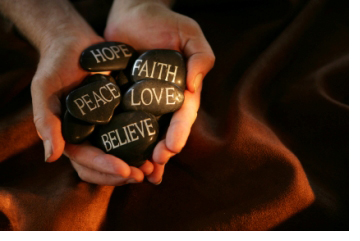