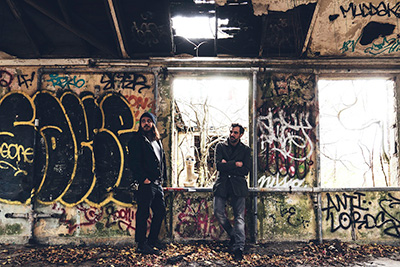 Of Clocks and Clouds is a Brooklyn-based duo comprised of singer-guitarist Joe Salgo and Ross Procaccio. Their music has been praised for guarding what’s good about classic and modern rock while enriching it with an electronic ambience. Better Off, their latest album, will be out July 15. Recently, Joe Salgo was kind enough to answer Wanda Waterman’s questions about why they create what they do.

What role did music play in your childhood?
Salgo: I’m a child of the 80’s, so music was huge in my childhood. Before I started playing music, I would delve deep into my dad’s vinyl collection: Chuck Berry, Dire Straits, and the Beatles, to name a few.

My parents had this funky-looking ottoman that I pretended was a synthesizer, and I used it to jam along to “Walk of Life” by Dire Straits. Then in preschool I made my first “guitar” out of wood and rubber bands, and I used to jump around with that in the living room. I always imagined myself playing music for people.

What’s the story behind the lyrics on “Another Life?”
Salgo: This song is a breakup song. It’s the story of being with someone day in and day out, and then one day they’re gone from your life. Both Ross and I went through some pretty heavy breakups while we were writing the songs for the new record, and this is what came of it.

It’s not a happy story?in fact, the whole record is a breakup album. The record has sort of an arc that starts with a bit of anger and pain and leads to resolution and acceptance. In “Another Life” we wanted to juxtapose the sad lyrics with upbeat instrumentation and arrangement.

Your music is infused with a kind of post-rock ambience?but it still sounds like rock. How do you make that happen?
Salgo: I think That’s a combination of Ross’s style and mine. He played in a post-rock band in college called “Planet Earth Taxi Company.” I think the rock-and-roll aspect comes from the two of us jamming together. We like to get heavy, but we still like the trippy ambient stuff. So It’s a combination of those styles.

How did you come up with your band’s name?
Salgo: I read an article in WIRED magazine about a German scientific philosopher named Karl Popper, who wrote about measurable events in nature. He divided the world into two categories: clocks and clouds. Clocks are the things that are constant and easily measured; clouds are more amorphous and constantly changing. That really resonated with me and became sort of a mission statement for the way we make music.

How did you two find each other?
Salgo: JDate.

Not really?we met at Ross’s old band’s show. After the show we talked and realized that we were both born and raised in Brooklyn, which is a rare thing to find in NYC these days. I asked him if he knew any drummers and he said yes?him. He was looking to leave his band. We’ve been playing together ever since.

What are your rehearsals like?
Salgo: We practice, record, and hang at 6611 Studios in Dyker Heights, Brooklyn. Our practices vary; sometimes we prep our set lists for shows. Other days we develop new songs. And sometimes we just get weird and jam aimlessly for hours while we record.

What’s your favourite instrument to play, and why?
Salgo: Ross uses his drums as therapy. He lets the emotions out in his playing. I’ve really delved deep into the guitar and delay effects and looping. The spontaneity of that keeps me on my toes.

What do you love best about the album Better Off, so far?
Salgo: We like the diversity of the styles within the songs. We have some heavy rock tunes, some lo-fi instrumentals, some Latin grooves, and some psychedelic electronic. Yet it all comes from the same place.

If your band’s life were a movie, what kinds of scenes would make you laugh? Or cry?
Salgo: Mrs. Doubtfire. No wait, maybe Armageddon. When Bruce Willis decides to stay and die?that makes me cry every time.

What conditions do you require in your life in order to go on being creative?
Salgo: Our life experiences feed our creativity.

Tell us about your upcoming projects.
Salgo: we’re working on a collaboration with Dave Doobie (a fellow Brooklyn native) from Shinobi Ninja. We plan on shooting one or two music videos in the coming months as well. Got some cool new merch coming, too.

Do you have anything else to add?
Salgo: Just want to say if you are reading this, thank you for taking an interest in our music. We can’t do it without you.