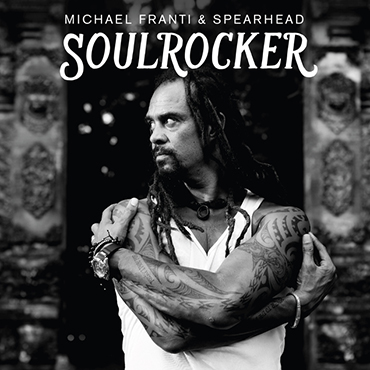 Ready for some of the most politically charged and optimistic music that I’ve ever heard? I wasn’t sure what to expect when I encountered Michael Franti’s upcoming album SOULROCKER, with his heavy emphasis on political turmoil and well known activism. But I was pleasantly surprised to be met with upbeat rhythms, thoughtful lyrics, beautiful melodies, and hopeful messages of peace.

Beginning his music career in 1986 with The Beatnigs in California, Michael’s music quickly caught the attention of audiences. However, it was his next band, Disposable Heroes of Hiphoprisy, founded in 1991, that propelled him into the limelight. Their first album, Hypocrisy Is the Greatest Luxury, caught the attention of U2, and they were made U2’s opening act during the 1992-1993 Zoo TV Tour. In 1994, Michael formed Spearhead, and SOULROCKER is their ninth album.

Apart from being busy creating fantastic music, Michael is also heavily involved in political, social, and environmental activism. In 2001, he was awarded the Domestic Human Rights Award by Global Exchange for his humanitarian work. His 2006 documentary I Know I’m Not Alone features footage from his travels in Iraq, Palestine, and Israel where he focused primarily on the human cost of war.

Although Michael’s music is heavily influenced by his political leanings and work as an activist, the music doesn’t exclude the listener and at no time did it feel like he was lecturing me. In fact, I found that the use of the upbeat reggae, hip hop, rock, and dance music drew me in, and I was very receptive to the messages that he was trying to convey. From the politically charged and sobering “Good To Be Alive Today” to the quirky and uplifting “My Favourite Wine Is Tequila,” Michael is continuously aware of his audience. It is obvious that he doesn’t want to dissuade and exclude anyone. His music can be listened to purely for the enjoyment of the tones and melodies.

Although most of the songs feature hip hop, reggae, and funk influences, the song “I Got Love For Ya” has a beautiful, down-to-earth, folk feel to it. The track focuses primarily on the beautifully played guitar, which complements Michael’s vocals perfectly. Noting the distances that separate us from loved ones, the themes in this song enhance the folk feeling. Yet the steady reggae beat, which is similar to that featured in the other tracks, means that it somehow fits in perfectly with the other tracks on the album.

My favourite song on this album is “Summertime Is In Our Hands.” The African-influenced rhythm and sound lend an element of fun, and I always find myself up and dancing to this track. Focusing on the hope for brighter days, Michael’s message of gratitude, peace, and love through music is the soul of this song.

Set to release June 3rd, SOULROCKER is a joyful journey for the soul and mind. I highly recommend checking it out, even if It’s just to experience some of the fantastic and uplifting beats.

Music Review—Everyone I Know Will Die