Columns
The Voice
In Conversation with Graveyard Lovers 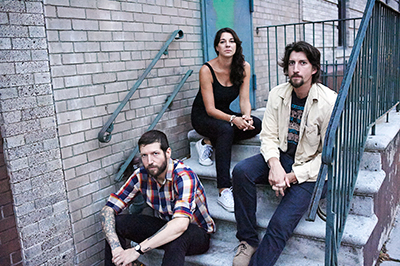 “Who told me to tell a lie?
Who told me to compromise?
Who convinced me to sell my mind?
I never used to shy away
From a light of a brighter day”
– from “Told a Lie” by Graveyard Lovers

Following a desire for a musical career, guitarist Zach Reynolds left New Orleans in 2009 and moved to New York. There he met drummer Tricia Purvis, with whom he quickly forged both a romantic relationship and a musical partnership. The two began to write songs together and soon became indie rock duo Graveyard Lovers, releasing their well-received first album, Dreamers, in 2013.

After this they asked Zach’s brother, Joel, to join them with his bass. Their music was soon being heard in film, television (notably the Season 6 finale of Shameless), and commercials. When we caught up with them the trio was ready to release the first part of their sophomore album, Past The Forest Of The Fruitless Thoughts, recorded in rural Connecticut at The Radar Studio with Will Benoit (Bad Rabbits, Ellie Goulding, Caspian). Part 1 of the album is due to be released in June, and the second part will be released later this year. Recently Zach Reynolds was kind enough to answer our questions about the new album and the influences behind it.

What elements in your childhood and early years pointed you toward music? Toward alternative rock in particular?
When I was a kid my oldest brother would buy tapes, and I would steal them and listen to them over and over. I grew up in the 90’s, so my rock heroes were Nirvana and Pearl Jam. I changed schools a lot and lived in some pretty bad neighborhoods, so I related to angst music.

What was your most beneficial musical educational experience?
The band director in high school. We didn’t have a great relationship, but he really enforced the importance of practice and hard work.

What was the most mesmerizing musical experience of your life?
I ran away from home when I was in high school to see Rage Against the Machine. I remember the entire arena was moshing. It was powerful; you don’t see that anymore.

What’s your favorite instrument to play and why?
Guitar, because It’s the only instrument I have real confidence in playing. Drums are definitely the most fun though.

Is your writing usually occupied with thoughts about relationships?
No, It’s not, and That’s what makes my songwriting different from that of other lyricists. All those songs about girls, love, and being heartbroken tend to bore me after a while. I tend to keep it to one or two relationship songs per album.

Did anything funny or bizarre happen during the recording, performing, or touring of Past the Forest of the Fruitless Thoughts?
Mid-way through the recording process we had our van stolen for the second time!

What do you like best about the album?
This album was written with my brother Joel. He’s a really talented bass and guitar player. We’ve spent years apart doing different things, so it was great to come back together and make a record. He really helped craft a new sound for us.

Why did you call this album Past the Forest of the Fruitless Thoughts?
It’s a line from the song “Judgement Day,” but the content of the songs from the album have a recurring theme: Waking up or realizing that you’ve been thinking in a way that causes suffering.

How did you pick your own band name?
“Graveyard Lovers” is from a 1920’s blues song, “Graveyard Love,” by Bertha Idaho. It refers to a love so passionate it can end in homicide.

Describe a typical rehearsal.
It varies each time. It’s sometimes one of the worst parts of being in a band for me? everyone’s coming from different places with different energy levels, so It’s difficult to get everyone in synch. When we’re all on, It’s fun and inspiring.

What conditions do you need in your life in order to continue with creative production?
I recently got into meditation and That’s helped a lot. Also time?you have to create time in your life for art.

Is Brooklyn a positive or negative influence on your work?
I don’t know if the music would be the same without NYC, so It’s been a positive experience.

How did your New Orleans background influence you?
Big time! Everything I write is grounded in a knowledge and appreciation of roots music.

Why did you decide to sign with Roundhill Music?
It was a great opportunity for us, and we immediately had a good feeling about them. they’re a smaller company, so they really treat their artists like part of the family.

Why did you decide to release the new album in two parts?
Mainly to lengthen the press cycle for it and get more buzz out of the album. We worked really hard on it, and when You’re releasing yourself It’s hard to get people to pay attention to more than a song or two. Dropping a full length all at once can be anti-climactic for a small band.

Are there any books, films, or albums that have deeply influenced your development as artists?
The biggest influence on me was a book of unreleased songs and poems by Woodie Guthrie: Born to Win. It influenced my move to New York.

What music have you been listening to lately?
Pearl Jam. We just saw them at Jazzfest in New Orleans. Also, this folk, blues guy, Otis Taylor.

Do you embrace a religion, ideology, or spiritual practice that informs your work?
I recently got into Buddhism, so we’ll see how it shapes the next record.

What’s your next project?
We want to write and record another album as soon as possible.