Articles
The Voice
Why I Hate Camping 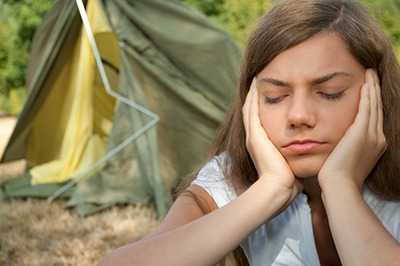 I am going to say something very un-Canadian, almost on the same level as admitting that I go around kicking beavers or that I don’t eat Timbits because they contain too many calories. But, let me go on record and say that I don’t like camping.

As any Canadian knows, vacation season unofficially begins on the May long weekend?especially on the Prairies, when a mid-May snowstorm is not uncommon?then begins in earnest when school gets out for the summer and lasts until Labour Day. These points in the calendar also mark camping season. People seem to get really giddy about the prospect of a season filled with camping trips, but I have never understood it it. Don’t get me wrong, I enjoy nature. I can be outdoors with the best of ’em. But when it comes to camping, I will take the risk of being of labelled an unpatriotic city slicker.

Considering my background, I should not have the dislike of camping that I have. I grew up in a rural area of southern British Columbia that is surrounded by lakes and forests. My childhood summers meant camping trips with my family, and although there were aspects of camping that were fun, I secretly wished I could be like other kids who got to travel to exotic cities like Vancouver and got to stay in a hotel.

I know that the main reason for camping is that my parents wanted to give me an appreciation of the outdoors, but they were also frugal, and camping fit their definition of a value-priced holiday. So, several times during the summer, our small, musty-smelling travel trailer was loaded up and off our family went in our trusty pickup truck to various campsites for trips that lasted from a few days up to two weeks.

My memories of camping weren’t all bad. Kids of course will play with pretty much anyone and kids in campgrounds tend to travel in packs, going from site to site to see who would hang out. I enjoyed being left to pretty much to my own devices and having new playmates while all the parents sat on lawn chairs to read or listen to CBC radio, which, other than the country music stations, always seemed to be the only station available. My parents just wanted to sit and relax and never wanted to explore very much, which is something my childhood mind never really understood. But I enjoyed evening campfires, and I appreciated the fact that we had our basic trailer instead of a tent, but deep down I really missed the creature comforts of home and also craved some variety in our vacations. We always seemed to camp in places that had no showers and only had cold running water in the toilet blocks. I didn’t like constantly smelling of a combination of insect repellent, sunscreen, and campfire smoke with no ability to wash my hair. I always seemed to read the stack of books I brought in about two days. And the trips that were truly memorable?for less than positive reasons?were those vacations where we were miles from home and it rained a lot, leaving me miserable, but my parents wanting to tough it out. As I grew older, I found myself resisting these camping trips and spent my time on them reading my teenage magazines and listening to my Walkman. Eventually, I began to resent camping and realized that I just didn’t want to do it anymore.

My opinion of camping hasn’t changed much. My list of requirements still includes a hot shower and a comfy pillow. My husband is British and he grew up with a different idea of camping, one that involved travelling to a seaside caravan park where there were amenities close by like a local pub and an amusement arcade. But despite my own biased views, I’ve realized that my adult dislike of camping stems from realizing that it has now morphed into something other than Canadian nostalgia.

What troubles me most about modern camping is that it is no longer a frugal vacation choice. Camping requires the proper gear, and to get kitted out with decent sleeping bags, cooking utensils, shelter, and other necessary tools, you’d better be prepared to fork out quite a bit. And I’m just talking about tenting. If you wanted digs that were a bit more solid?a modest tent trailer or, if you wanted to be posher, a motorhome or full trailer?that requires an even greater financial investment. And if you wanted to really make your campground neighbours jealous by showing up in something that looks like a rock star’s tour bus and contains the same modern conveniences, you’d better be prepared to shell out the equivalent of a second home. These days camping is big business, and there are the recreation fairs, outdoor mega-stores, and dedicated catalogues full of shiny gadgets to prove it.

Then there’s the competitive sport of booking a spot, especially in popular places like Banff or Jasper. When booking opens for reservations each year, it now creates the same fury as booking concert tickets. Not to mention that the cost of site reservations isn’t cheap. Camping prices in provincial campgrounds vary, but can cost an average of $20 per night. Camping in national parks, especially in sites with amenities such as hot showers, can cost over $30 per night. Firewood, which used to be free, is often an extra charge per bundle. I shake my head in disbelief.

Because I’ve inherited my parents’ frugal tendencies, I balk at the cost but I also am a bit envious of those who can afford large recreational vehicles and all the toys to go with them. I reckon that if I were to get into the camping thing, each camping excursion would cost hundreds if not thousands of dollars when the value of purchasing all that equipment is weighed up against the amount we would use it during the year. I wish that camping would get back to its roots of being an economical activity, so that all Canadians could express their “Canadian-ness” by experiencing the great outdoors in this way. But for many modern Canadian families on a budget, camping is simply too expensive.

I still enjoy the outdoors. I love hiking and getting out of the city to explore the Rockies which are a short distance from Calgary. I am really pleased that my son enjoys many outdoor activities and I wish we could do more of them. But deep down, I know that I’m just not a camper. And when it comes to family vacations, I really enjoy camping out in a hotel for a few days, not a tent. 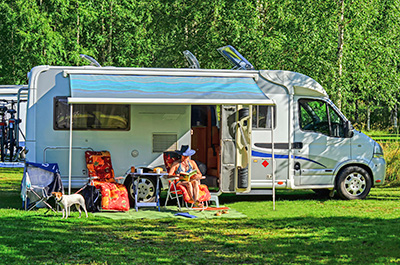 The Absurdity of Camping