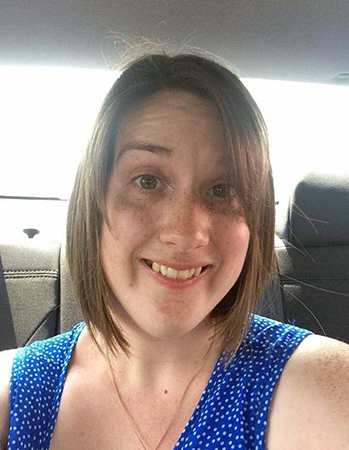 Jessica Avery is a Bachelor of Professional Arts Student who is nearing graduation from the Communications Studies program. She was kind enough to take a few moments from a busy family and school life to talk with The Voice Magazine.

First of all, whereabouts do you live? And have you always lived there?
I am currently in Mallorytown, Ontario, which nobody is going to know. we’re a town of 1,000 people in between Kingston and Ottawa. I grew up here, but I spent some time in Calgary. I spent some time in Kingston. I floated around bit in my 20s. Now, I’m back.

Which AU program are you in?
I am in the Bachelor of Professional Arts with a Communication Studies program.

So what do you do other than your studies?
Currently, I don’t work, but my background has all been in not-for-profit and fundraising. I am actively looking for a job because I am about to graduate.

Describe the path that led you to AU.
I transferred in. I did a 3-year advanced diploma at St. Lawrence College. My last semester of college I had a baby boy. I gave birth and graduated within a few weeks of one another. I took a year off for my maternity leave and decided that I wasn’t ready to go back to work full-time. I decided to transfer to AU. I have been working on my degree for the last 13 months, non-stop. Massive amounts of content at once.

What do you do like to do when You’re not studying?
A lot of my time now is spent with my son. We have a cottage on Charleston Lake. We go swimming, boating, and fishing. I really like to read. I am excited to read the books that aren’t academic because it has been awhile. I also watch too much Netflix. (Laughs)

Who in your life had the greatest influence on your desire to learn?
I think there’d be two people. First, my mom worked really, really hard for my brother and I. She went back to school when we were in school. I saw her do the mature student thing. As well, I had some really good professors in my brick-and-mortar college and AU. Karen Wall is my advisor for my directed readings course. I think she has pushed me to look at things differently on the academic side over the last four months. I wouldn’t have previously. I like her. (Laughs)

What famous person, past or present, would you like to have lunch with, and why?
I think I would have to choose, right now, two. They are a married couple. Justin Trudeau and Sophie Gregoire Trudeau. I met him. He did the whole speaking tour thing at the school. This is before he as elected. He is full of charisma. He was really smart. I feel like they are a kind of power couple right now. It is interesting to watch that dynamic play out publicly. I would take an hour and discuss what they see for the future of the country being like or what they see for their kids and my kids, and my kid, and that. I think that would be a very productive meeting. I guess, full disclosure, I’ve always wanted to work for Justin in communications. Maybe, that would help, too.

Describe your experience with online learning. What do you like? Dislike?
I like that it is self-directed. I don’t know how I could juggle a class schedule. I’ve seen both sides where I would be in class until 8:00 at night or 8:00 in the morning. That wouldn’t work for my life now. I like being able to do it when I have the space, the time, and the ability regardless of where I am. Although the university is really good at having their app, and the Facebook group, and that kind of conversation, I miss having people to bounce ideas off of in real time to have that discussion about a theory or a thought or a practice. I found in college ideas would get better sometimes because people would be able to distill what You’re trying to say and build on it. Whereas if It’s just me, I’m like, ?I don’t know if this makes sense.? It is that chance to have feedback with classmates. I miss that.

Have you had a time when you wavered about your education?
Yes! There’s been a lot of juggling. There’s been a lot of late nights. I have lost some time with my two-year-old. That is kind of hard. I’m thinking, ?Is this going to be worth it?? When I hit the peak times when everything is going to be due in the next 4 weeks and You’re trying to juggle, without fail, That’s when a daycare cold cycles through. (Laughs) It’s when I feel like I can’t handle it all. I normally take a break or a day off and come back to it renewed, and re-focused.

What was your most memorable AU course?
I really liked Communications 420. It’s the Topics in Communication: Children and Media class. I was finding that I was reviewing the content that my son was digesting and I really liked the assignments in that class like developing programming like I was going to be a librarian coming up with all of these great ideas to get children to read. Literacy and early literacy is important to me. It is like being able to juggle the theory with some real life applications, which is sometimes missing in communications classes where they are so theory heavy. That this one was more balanced a little bit better.

If you won $20 million in a lottery, what would you do with it?
I would pay off my student loan first. (Laughs) I would like to travel. I have this dream to build a tiny house and be wild for a while. I don’t know if it will ever come into fruition. I’ve seen some parts of Canada. I’d like to go to the East coast. There’d be a lot of travelling and paying off debt.

What have you given up to go to AU that you regret the most? Was it worth it?
I’ve lost a lot of time with my friends. There’s been a lot. We all have children and work. There’s a lot of balancing. There’s a lot of me missing out on some fun events or fun parties. Not parties, but kids? birthday parties, where I have to say, ?No.? Because there’s an assignment due. I’m excited to move beyond the ?I’m still alive. don’t worry, I’m just in the rabbit hole.? I’m excited to get my social life back.

What’s the single best thing AU could do to improve your student experience?
I keep going back to bouncing off ideas. I wish that for the application or the Landing, even in Moodle themselves, were better utilized, whether that is part of a class component ? I don’t just want it to be for marks, but to have some good discussions once in a while. It gets lonely sometimes when it is just you and your screen.

If you could wake up tomorrow with a “superpower”, which one would it be?
I think, I’ve always wanted to be Iron Man. So, a whole lot of money, where I could anything I want, like iron Man. I don’t know. I would like to be Tony Stark, whatever that superpower would be.

What is your most prized possession?
I don’t know. I don’t have a lot of things. Actually, I think it would be the last birthday card my grandmother signed before she passed away. I’m not nostalgic. I don’t tend to keep them, but I still have that one.

Please tell us something that few people know about you.
I come off quite often like professional and to the point, but I can be quite funny. You just have to get there. There’s a dry sense of humor. I don’t know.

What do you think about e-texts?
I don’t love them. I tend to buy the physical copies of the book, whether That’s on Amazon or Chapters or however we get the physical copies for the e-texts. I understand them. Like, I understand using them. I just wish that there was a chance to choose either-or because I cannot read on a screen to save my life. I am the person that needs to write in the margins and doodle. All of those things.

How do you find communications with your course tutors?
Overall, they have been really good. I mean, a lot of people thought, ?Online learning, do you even talk to the people that are grading you?? I found that I have developed some good phone and email relationships in my classes. I don’t know if That’s because we’re all in communications and we all like to talk and communicate. I find that questions and concerns are quickly answered There’s an openness, a friendliness, and a follow-up. I think I’m most excited for convocation to see these people face-to-face and be like ?I really liked you.? (Laughs)

Where has life taken you so far? (travels for pleasure, work, etc.)
Not very far, I think my biggest adventure was when I was in my brick-and-mortar school. I got to go to a world business forum in New York City. It sounds really lame, but it was at Radio City Music Hall. It was professional development. Fareed Zakaria was speaking. Richard Branson was the keynote. I was in the room as a student with these big personas. The ideas were flowing and conversations were happening. There was networking. We got to spend the night in New York City. It was the best personal and professional trip I’ve ever taken.

What (non-AU) book are you reading now?
My son is all about The Monster at the End of This Book, which is Grover. It is a Sesame Street thing. We read that, daily. Currently, I am reading Amy Poehler’s book, again. Like I said, I am excited not to have to read academic texts for a while. (Laughs) 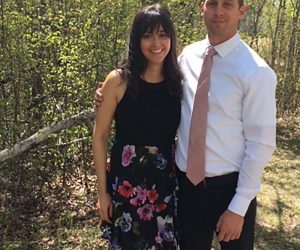