Articles
The Voice
Summer: Half Empty or Half Full? 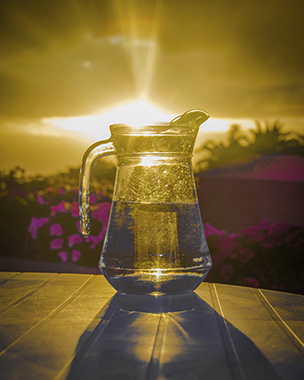 The end of July marks roughly summer’s half-way point. I often dread the act of flipping the calendar over to August because it forces me to acknowledge the beginning of the end of summer.

As long as the calendar reads “July”, summer seems to stretch far into the hazy horizon. In August, though, summer seems finite and brutally short. Every day screams, “It’s almost over!”

To stave off despair, I indulge in Pollyanna-ish thinking. I tell myself that summer isn’t really half over until the second week of August, that there are weeks and weeks left for summer fun, that the weather will still be nice in September and probably into October, too.

But even with rose-coloured glasses on I can’t ignore that daylight hours are waning, birds are preparing for their fall migration, and retail stores are promoting back-to-school gear.

Summer becomes a philosophical dilemma. Why should the second half of summer be any less enjoyable than the first? Is summer half-empty, as my calendar taunts me, or half-full?

If summer is half-empty, then the clock ticks loudly. Fall is around the corner and winter won’t be far behind. The opportunity for summer leisure is diminishing day by day and there’s an urgency to fit more in. Time is short.

If summer is half-full, then there’s no need to count the remaining days. It’s summer today and will be summer tomorrow. Summer days in August are no different than summer days in July. I can look back and contemplate how many summer activities I’ve engaged in so far and marvel at how much can be squeezed into half a summer. There’s still plenty of time.

Too much focussing on the empty half?the summer days already spent?robs the upcoming full half of its enjoyment. I keep anticipating the end instead of enjoying the middle.

Focussing on the full half?the majority of summer yet to come?gives each day a lazy, laid-back feeling. I recapture that beginning-of-summer feeling of endless summer stretching off to a point too distant to be of concern.

Despite my determination to view summer as half-full, I usually vacillate between half-full and half-empty. It takes a lot of discipline (or denial?) to enjoy days as they are unfolding and not fret about time slipping away. And it requires mental juggling to simultaneously enjoy the current season while also looking forward to the next. I love autumn but, like summer, the second half is a mental struggle.

I have a few days to prepare. When I flip the calendar to August on Monday, I hope I can view it as yet another full month of summer with summers? end out of sight on the next page. Summer is more than half full.