Columns
The Voice
In Conversation with Gold Clubb 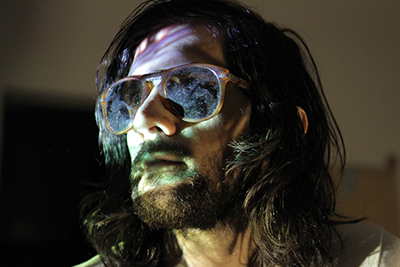 Gold Clubb, aka Nicky Francis, is a Brooklyn-based indie artist who’s just released a new track, “West Coast Gurls,” from the upcoming Gold Clubb: The 2-Stroke Mixtape, due out in September. The single was mixed by Josh Valleau, who’s also worked with Kanye West, John Legend, and Snoop Dogg, to name a few. The album is being put together by bassist and underground producer Matt Brandau, who’s worked with Ski Beats, Elvis Costello, and Camp Lo, among others.

Nicky Francis has one foot in the fashion world thanks to a unique and widely lauded line of linen t-shirts created by fashion design team Banner Day, embroidered with Nicky’s drawings.

Recently Nicky took the time to answer some of our questions about his history, his projects, and what makes him tick artistically.

Describe your musical beginnings.
My pops was a bass player and a Beatles fanatic. He quit playing once the kids were born, but he always had the stereo on and would put the headphones on me as a baby when he was transferring all of his vinyl LP’s to cassette so he could listen in the car.

I was a little dude in the ’80’s and I thought John Lennon and Michael Jackson were the best. They had so much style. Tom Petty and the Eagles were mainstays on the radio and completely re-wired a part of my DNA from repetition alone. Frank Sinatra was always on when my relatives came to town, I got into MTV some, but not religiously.

Then in eighth grade I heard Wu-Tang and Dr. Dre for the first time and my world tilted. I became a ravenous hip-hop fan: Nas, Fugees, Tribe Called Quest, Mobb Deep, Tupac, early Jay-Z, all the Boot Camp Clik stuff. Ghostface Killah was my Elvis.

You could cop mixtapes coming down from New York from dudes at the 7-11, and you would hear all the new hip-hop that hadn’t been put on CD yet. Because of its proximity to D.C., Baltimore had a ton of music stations. There were four radio stations that played hip-hop and R&B, and Friday nights from midnight to five in the morning was underground hip-hop on Morgan State radio. I also developed a deep love for the commercial R&B hits of Mary J. Blige, Jodeci, Faith Evans, Toni Braxton, and D’Angelo from the local radio.

So, long story short? I was a huge music fan who wrote a lot of lyrics but never put it all together ’til I picked up a guitar at the age of 22 and decided to learn how to play. I taught myself within a few years, then moved on to piano, bass, and drums.

What or who in your musical training had the most? and best? influence on you, creatively?
Two things: I’d say my pops giving me in-depth exposure to The Beatles from a very young age got me in the headspace to be creative and always make it a hit, and my teenage years of being completely ensconced in hip-hop culture taught me what it means to deliver lyrics, tell stories, and perform with danger and heart.

What was the most mesmerizing musical experience of your life?
This is gonna sound real hippy, but fuck it. I ate some mushrooms and saw My Morning Jacket play outdoors on the Brooklyn waterfront at sunset right after a rainbow appeared over the stage. This was a few years ago. It was all-time next level. They’re unbelievably good live.

Has anything funny or bizarre ever happened to you while musicmaking?
It’s more like making music is funny and bizarre, in the way that anything important in life is.

How do you balance your musical career with your career in art and fashion?
It’s all part of the rhythm of the hustle. With so many people offering their voice, I hope to set myself apart by adding value to the culture, as opposed to just more noise. Whether that’s by turning on the mic or picking up a brush, the aesthetic and the approach is the same for me. Plus, it’s nice to be able to switch channels here and there; I spend so much time listening, performing, recording, and writing that I need a break sometimes. Especially when there are no waves, which happens a lot on the east coast.

How does it feel to see your drawings on high-end t-shirts?
It’s dope. Grahm and Kate are like family, and they put it all on the line to start their businesses. It’s hard to make it work out there, but they’re doing it and I’m really proud just to witness it, let alone be a contributing member of the team.

Some of the lines of “West Coat Gurls” sound like typical angry hip-hop, but the music is disarmingly sweet. Why did you decide to match this music with these words?
Everything is everything. Just felt it. Came out like that.

Is Brooklyn a creativity-enhancing city for you?
New York in general has been huge for me. There are so many people and energies colliding that I can’t help but feed off it. I write a ton on the subway, just absorbing everyone’s vibe.

How did you come up with your band’s name?
I had a fake ID from the time I was 16. My “associates” and I would often go to the strip clubs on the east side of Baltimore. The clubs there have amazing names like “Wagon Wheel” and “Dreamers.” My favorite one was the Gentlemen’s Gold Club. I added a “B” to the inspiration to avoid any complications.

What’s it like working with Matt Brandau?
He’s great. Unreal bass player, really original producer, and probably the coolest guy in the world. There’s never any pressure or negativity. He understands the mojo, for sure.

What do you like best about the new album so far?
That everybody’s feeling it!

What conditions do you require in your life in order to go on being creative?
To not be dead. Everything else is manageable over time.

What do you feed your muse?
Inspiration comes from everywhere. It’s always changing. Lotta uncorrelated reading and watching and listening. I just read a book called The Man Eaters of Kumaon by Jim Corbett about a tiger tracker in India in the 1930’s that was really dope. Musically I’ve been revisiting Cody Chestnutt’s A Headphone Masterpiece to pick apart what makes it tick.

If you had an artistic mission statement, what would it be?
Make it move, make it amazing, feel it, and PLAY THE HITS.

Do you feel that artists have an obligation to straighten the world out?
Hmmmm. We need to inspire people for sure, to show people the power that’s in everyone’s heart, but ultimately the responsibility lies within each person to check themselves and straighten out whatever they can on their own.

Tell us about your upcoming projects.
The Gold Clubb mixtape is coming out nowish, along with a sweet video for “Giving It Up.” For my guitar band, The Majorleans, our second album is in the can along with some videos. We worked with some great people on that and it became a beautiful collection of songs. It will be released in early fall, I believe, with some shows to back it up.

Gonna have another art show in late fall on the Bowery, and after that probably skip to LA for a bit to work on the demos for the new songs I’ve been writing.