Articles
The Voice
An Act of Piracy 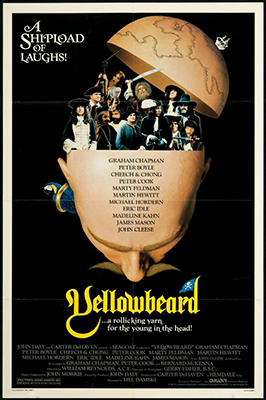 It was the best movie Monty Python never made.

Yellowbeard, released in 1983, was surely the funniest movie ever to stagger across a movie screen. Even though few people seem to have heard of it, let alone watched it, Yellowbeard remains a cult-classic pirate film among aficionados of campy comedy.

Starring Graham Chapman, Eric Idle, and John Cleese, Yellowbeard is often mistaken for a Monty Python film. But It’s so much more! With Cheech Marin and Thomas Chong (aka Cheech & Chong), Madeline Kahn, and a raft of other big names (including a cameo by David Bowie,) Yellowbeard is like a booze cruise of comedic actors.

Yellowbeard opens with convicted pirate Yellowbeard (Graham Chapman) releasing himself from prison. Although he completed his sentence, the authorities—annoyed that Yellowbeard survived the harsh conditions of imprisonment—easily persuade the queen to extend his sentence “indefinitely.” Yellowbeard has other plans.

Once outside, Yellowbeard seeks to retrieve the treasure he buried on a remote island. Fortunately, a map of the location was tattooed on his infant son’s head. Now a grown man, Yellowbeard’s son Dan (Martin Hewitt) has no idea who his father is. Bookish and introverted, Dan abhors piracy and longs for a simple life of study. (As an aside, Sting was at one time set to play the role of Dan, which could only have improved the characterization.)

Initially intending to slash the map from Dan’s head and sail off alone, Yellowbeard is persuaded by his “wife” Mrs. Beard (aka “Betty”, played by Madeline Kahn) to take Dan along—and alive—on the treasure pursuit. Mrs. Beard, her befuddled upperclass twit of a lover Lord Lambourn (Peter Cook), and a motley crew of hangers-on join Yellowbeard on the perilous voyage to retrieve the treasure.

Along the way they clash with British naval officer, Commander Clement (Eric Idle), and also two Spanish emissaries (Cheech & Chong) who are bent on claiming all valuables for God, Spain, or themselves, not necessarily in that order. Add some back-stabbing friends, a blind informant (John Cleese), the requisite love interest for Dan (Stacey Nelkin), and an island full of murderous monks, and you have madcap mayhem.

I’ve watched this movie dozens of times over the years. I began with a grainy copy taped—yes taped—from late-night television. Many years later, Yellowbeard was finally released on DVD and I bought a copy.

After watching Yellowbeard so many times I, along with my son and former husband, could quote every line. And it is a quotable movie (my favourites: “I’m in disguise, you stupid tart!” and “It’s how he always wanted to go: horribly.”)

Sadly, I lost my copy of Yellowbeard in a divorce (another act of piracy?) I’m left with a memory bank of quotes and a smattering of—appropriately pirated—Youtube videos.

Lost & Found – The Strangeness of Us