Columns
The Voice
The Mindful Bard – The Lobster 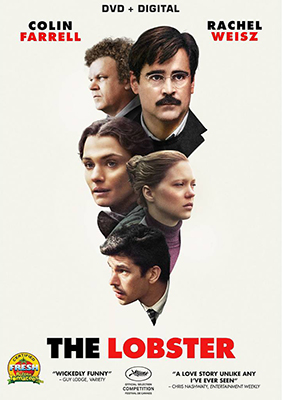 “Humankind struggles with collective powers for its freedom, the individual struggles with dehumanization for the possession of his soul.”
– Saul Bellow

Have you ever known someone who’s always responding to jokes by saying, “That’s funny,” but never laughs? doesn’t even smile? Lobster may be the only film for which this would be an appropriate response.

A dark comedy (very dark), Lobster is one long sad ending, but one without the benefit of catharsis?instead of bawling while the credits roll you end up shaking your head and asking, “Is that all there is?” The genius of it is the juxtaposition of starkly realist cinematography with a surrealistic plot, brilliant acting, and contrived, odd-sounding dialogue in the Hitchcock tradition, all transported within the vehicle of a speculative fiction film.

One way of looking at speculative fiction is to see it as a revelation of what’s happening now, or at the very least an indication of where we’re headed if current conditions persist. You only need to be fifteen minutes into Lobster before you begin to reflect on our present social environment: poor communication, sexual objectification of everyone and everything, and sliding moral standards are all contributing to a mating culture That’s just begging to be taken over by an authoritarian system.

Yes, the fact that our couplings and uncouplings have become so desensitised, so robotic, so shallow, so compulsive, and so addictive points to a growing weakness that invites social interference à la Orwell’s 1984 and Huxley’s Brave New World.

The premise of Lobster is that in the year such-and-such those who find themselves suddenly without a partner due to death or divorce don’t have as much as five minutes in which to grieve and heal; they have to hit the ground running in order to secure another mate.

A white van comes to bring them to the hotel where they have 45 days to single mingle. If they can’t find someone in that time they get turned into the animal of their choice. (Our hero, David, chooses to be a lobster, hence the title.) In the evenings the singles enter the forest with tranquiliser rifles to shoot “loners,” members of a gang of single partisans out to sabotage the ruling order. For every loner a single kills she gets to stay an extra day at the hotel.

What are the criteria for love, according to the authorities? Because all traces of individuality have been erased It’s hard to say. The two people must have something in common, preferably a malady?nearsightedness or limping or nose bleeds, for example. David’s friend fakes nosebleeds to marry a girl who chronically suffers from them, and so everyone approves of the marriage. This belief in the necessity of such commonalities is pertinent to the film’s bizarre ending, but perhaps it just goes to show that in this world individuals have little else to share.

We see a cruel ritual intended to pressure men to try harder to get a mate, but It’s essentially a form of sexual molestation. In the hotel the maid orders David to strip to his underwear and lie on the bed. She turns her back, lifts her skirt, and gyrates her tush against his crotch until he has an erection, then leaves. His very being screams against it while racked with longing. He protests the ritual and after she insists that its mandatory, he begs her to continue; she refuses, after which David, tortured, repeats:

On his wedding night his new psychopath wife treats him to the same ritual.

People still have powerful romantic longings?a need for connection, joy, oneness with another human being?but are pathetically incapable of achieving it. There are married couples that experience an artificial way of living characterised by vapid conversations and false avowals, and then there are couples with real feeling who are unable to show it or even understand it, with disastrous results.

In one weird scene in the forest David is captured by his friend, who remains at the hotel. The friend tells him to come back, but David refuses, saying:

“It’s really nice being on your own, no one tying you down.” It’s exactly what many singles say today, but in this context it sounds hysterical.

The idea that those who fail to find a partner are turned into animals is an interesting touch, showing how society rates the single as well as suggesting an overarching interference into divine territory, certainly for those who believe in reincarnation.

There’s an interesting quiz on he film’s website. If you had to be an ani