Articles
The Voice
Typewriters are the Newest Trend in Writing 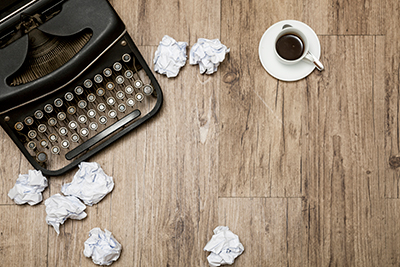 Typewriters belong to an era of a recipe box of index cards, carefully typed out by your mother or grandmother, or of formal business letters meticulously formatted on embossed company stationery. These documents have such charm because they have an invisible subtext, a connection that exists between the words on the page and the writer. They were produced on the type of machine that, if it is lucky, is now gathering dust in an old basement or attic, smelling delightfully musty; or if it is not, buried in a landfill. But rather than being consigned to a historical age, typewriters are finding a second life.

This revelation may come as a complete surprise because computer technology has made the act of writing so effortless. Laptops have created all-in-one workstations that, like typewriters, are completely portable but gloriously efficient at everything they do. But typewriters are fighting their way back from obscurity, from the deepest corners of junk shops and antique malls, to reclaim their place in the canon of writing technology.

At one time, typewriters were everywhere. They were essential in every home, school, and workplace. People of certain generations have memories of learning to type in school by doing endless drills for speed and accuracy. Or, if not, the two-fingered hunt and peck method of producing written work, often accompanied by the liberal use of correction fluid. Advertising for the latest and most technologically advanced typewriters could be found on billboards and in magazines everywhere. But, while the modern world often sees typewriters as a part of history, one cannot take for granted that it was typewriters that truly opened up new avenues in the business world. One of the largest career avenues for women who worked outside the home was to join a typing pool that created a company’s correspondence. And the image of seasoned authors (think of Hemmingway and even Woody Allen) is one of them laboriously pounding out their manuscripts one page at a time.

It seemed, for a while at least, that typewriters would never go away. But the coming of of the personal computer swept the typewriter’s influence aside. By the mid 1990s typewriters were antiquated and obsolete. The once mighty names of the day, such as Remington, Smith-Corona, Underwood, and Royal all drifted away one by one. Even IBM, one of the largest names in electric typewriters, abandoned them to concentrate on manufacturing personal computers.

There is a growing realization in our internet age that typewriters have a tangible connection to the act of writing. One that is incomparable with that of computers. Typing on a manual typewriter is a deliberate act, from the inserting and aligning of the paper, to the pressure required to press the keys so the ink makes a solid impression on the page, and to the ding of the bell after each line, which then required the user to physically advance the paper. Then there is that typing requires a consciousness about what to write, that the operator had better know ahead of time what to write because there is no delete key. In contrast, the ease of writing with computers has created a detached relationship between the writer, the device, and the words on the page. On a computer, words are not made real until they exit the computer via and printer. Typewriters, on the other hand, are concrete, they are immediate and they are sensory. Typing with a typewriter is, overall, a mindful act.

Typewriters appeal to this generation of “digital natives”, those who do not know any time in their lives without the personal computer or even the internet. This might go some way to explain why they are so trendy. What was viewed as the symbol of the industrial past is now very much the alternative to modern mass production. As well, the “Slow Movement”, articulated by Carl Honoré, seeks to address the speed of modern culture that emphasizes doing everything instantaneously?from eating to travelling to working?and tries to reclaim the sense of the quality of what we fill our time with, as opposed to the quantity of what we do in it.. The whole culture of typing fits in with this movement because it recognizes that all communication should foster relationships between people, not be something that is done simply for the sake of it.

The new typing revolution is giving a new life to typewriters by tapping into the disillusionment with the fast pace of modern communication. This revolution is leading to the National Day of Unplugging, public typing (hanging out in coffee shops or a park, but typing away on a manual typewriter rather than a laptop), typing socials, Nanowrimo type-ins where the challenge is to produce an original novel typed completely manually, as well as producing old-school fan zines entirely by typewritten copy and hand-drawn illustrations.

Typewriting is also proving to have a positive effect on students with disabilities such as ADHD or dyslexia who are using typewriters as a “new” kind of assistive technology. The deliberate nature of typing is helping them to make the connection between getting their thoughts out of their brain and onto a page in another way. The novelty of writing on a typewriter and the nature of typing, including the necessity of touch and hearing to produce their work, may give these students a more holistic experience that computers cannot provide.

But whatever the reason for the typewriter’s comeback, it is leading to an overall desire to keep this part of literacy technology alive. People are seeking out typewriters like never before through Ebay, online classified ads, garage sales, antique fairs, and second hand stores. There are collectors who pride themselves on the variety and number of machines they own. But it is also leading to a realization that the original typewriter culture needs to be prolonged as long as possible. The people skilled in repairing and refurbishing typewriters are becoming far fewer in number as the years go by, and parts for these machines are becoming increasingly scarce. However, replacement ribbons are still available to make typewriters still very much usable. One side effect that the new appetite for collecting has is that the demand is pushing prices up on the more obscure and older models. Nevertheless, people are discussing typewriters more frequently than they have in decades, and are determined not to let them die.

If you aren’t lucky enough to find a manual typewriter to use, modern technology is creating more ways to incorporate typewriting. The actor Tom Hanks is also a well-known collector who has co-created an app called HanxWriter for Apple devices. According to the website, the app “reflects the look, feel, and sound of old-fashioned word-processing while embracing a few new-fashioned luxuries (like the DELETE key!).” Also, the craft product manufacturer We R Memory Keepers has created the TypeCast machine that is a fully functioning retro-style manual typewriter but resized so that large scrapbook paper and other craft materials, such as cardstock, can fit into the machine.

It may be that the trend of typewriters will wane and eventually fade back to near-obscurity. But even if it does, the role and importance of typewriters is being recognized in a way that it hasn’t been previously. One thing is for sure, however, a secret that people of a certain age know, is that typewriters make writing more feel more real, more than just any old Word document.

http://www.slowmovement.com –If you want to find out more about the Slow Movement
http://nationaldayofunplugging.com — How you can pledge to take a periodic break from too much technology.
http://typewriterdatabase.com — A comprehensive list of typewriters and their characteristics, including links to user manuals.
http://www.typewritercollector.com — If you want to get started in typewriter collecting, this database is a great start.
http://www.typewriterrevolution.com — A fun homage to typewriter culture and ways to find out more about the trend of typewriters in the digital age.
http://site.xavier.edu/polt/typewriters/typers.html — A comprehensive and fascinating list of famous writers and the machines they used to produce their masterpieces.

Carla would love to start her own typewriter collection and recently bought her first manual machine! She wonders what would happen if she were to submit a hand-typed essay to her tutors. 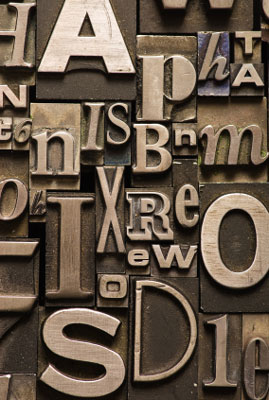