One aspect of employment not often discussed is how work affects family life. Parents often say it is stressful and exhausting trying to balance the different roles that modern life requires. Parenting also seems to come with a hefty side-order of guilt; a feeling that that no matter what decision is made, it could be the wrong one. With all the conflicting advice, deciding whether one should “lean in” to a career or take a step back to focus on family becomes extremely difficult.

Modern moms are especially feeling the pull between raising children, running a household, and contributing to a family’s income. Moms want?and often need?to work outside the home to make ends meet for their family. The Mom Economy, as it has become known, is becoming increasingly important, but is an aspect of work that is not often discussed. And the role of women as a contributor to the overall health of an economy isn’t factored into current models. Trying to pinpoint the exact picture of women’s work isn’t easy, either. Statistics are not updated frequently, and many studies are American-based, not Canadian.

But the most recent Canadian overview of the picture of working women in Canada from Statistics Canada provides some interesting data. The biggest trend in the workplace during the past century, other than the rise of technology, has been the entrance of women into the workforce. Statistics Canada calculates that the rate of women in the workforce grew in the mid to late twentieth century from 24% in 1953 to 76% in 1990, but the overall pace of growth has slowed since then. More women are entering traditionally male-dominated careers and embracing entrepreneurial jobs than ever before.

These statistics are positive, but Statistics Canada also reports that there remains an earnings gap between men and women in general, as well as a wage gap between women who have dependent children and those who do not. Women who take an extended career break to raise children also experience a decrease in career advancement opportunities. This gap is even more pronounced for single mothers, recent immigrants, and aboriginal women. Women tend to work part-time. And the most common occupations for women are retail sales assistants, followed by administration assistants, nurses, and teachers at the preschool or elementary levels.

Statistics, however, are ultimately just numbers. To try to get a sense of what work is like for women, several women, including Athabasca University student moms, candidly spoke to The Voice about their experiences.

Most of them agreed that there was an expectation to leave high school and either immediately enter the workforce, or head to post-secondary education. But this did not always equate to a definite career plan. Vicki Parnell, an AU student mom who lives in Vancouver, said that she honestly didn’t have a clue what she wanted to do with her life once she finished high school. After three semesters of university and “a staggering amount of student loans,” she left university to really evaluate what she wanted to do next but, like many women, found herself in a different situation when she met her partner and started a family. She said “when my daughter was born, I didn’t want to trade those first few years of her life’so we made the decision to be a one-income family and focused on building my husband’s career in the IT industry.”

Gaylene Weidlich, another AU student mom who lives in Spruce Grove, Alberta, experienced something similar. She took a photography course through NAIT after high school but decided that, ultimately, photography as a career wasn’t for her. She ended up in sales, and, after she was married, operated a business with her husband. At the time she became a mother she was selling real-estate but admits that “with three young children, it was too much. The kids needed me and juggling parenthood and a high-intensity career was difficult. Both my husband and myself felt that having a stay at home parent is worth the trade in the extra income.”

Women also said that their attitude toward work changed when they became parents. Erin Chrusch works as an advisor to the City of Calgary. She completed her law degree and began her career in the legal field, but found her priorities shifted after she became a parent. She remembers that she tried to make choices related to her career that would support balance. “This meant working at a smaller firm instead of chasing down a more lucrative partnership at a big downtown firm. Eventually it meant leaving the law firm for a more fulfilling career in government. I understand that by doing so I became part of the diaspora of women leaving the private practice of law because it is so difficult, but it was a choice that has worked very well for both my personal career and for my family.”

The shift in mindset also affected Isabella Ferritto, an AU student from Ottawa, Ontario, in another way. While she always wanted to have a career in teaching, she is reaching her goal gradually, fitting in her university studies between raising her children and working as an education assistant in an elementary school so that she can go on to complete her teacher training. She says that her slow-but-steady progress has served her well. “Before I had children I was able to relate to kids, but after having children of my own, I am able to understand children more. I am able to relate to parents and the busyness of life. I was very fortunate that I was able to go to part time work and get to have the best of both worlds.”

While being able to handle multiple roles seems to be expected of the younger generations, women who are now older and can look back on their working lives caution others that it is not always easy?or possible?to do everything well. Anita Coulson, a retired BBC journalist who worked as a foreign news correspondent for many years says that she did not have the luxury of choosing her work patterns and wasn’t offered flexible shifts, not even once she became a mother. She said “having children definitely set back any career advancement for me. I was identified as a ’high flier’ before having children, but afterwards I was relegated to awful jobs and routinely denied exciting opportunities.”

The modern world of work has opened up new opportunities for women, such as for recent AU graduate Jessica Avery, who is now working in communications for non-profit settings and has also done freelance blogging and social media work, which has allowed her to be flexible and work from home around her family’s schedules. But she also worries about her work future because of the economically depressed area of Ontario she lives in.

Although there is a shift in the types of work opening up to today’s workers?both men and women?the shift in society itself and how it defines the role of work and what it means for families is much slower to change. Erin Chrusch observes that “we have to stop looking at this as only being a “Mom” issue. It is a family issue that should involve dads as equally as moms. Our household works because my husband takes an equal role in picking up the kids from school and daycare, contributing to household chores, and taking them to activities. Women are already behind the proverbial 8-ball because we have to factor in when we have our children (if we can control it at all) and see how that fits within our career plans. It’s only fair that once the children are here, the other person responsible for their existence takes an equal role in helping look after them. Women are now a greater percentage of college and university graduates than men and more and more households have primarily female breadwinners. It is shifting from the automatic assumption that ’the Mom’ looks after everything at home…slowly.”

Anita Coulson agrees. “It is an uphill battle to enforce the kind of parent-friendly changes in our working lives that would hugely benefit not only mothers, but all parents, and, above all, their children too. We need more feminists, and by this I mean both male and female activists who promote equal status for all human beings regardless of gender, in positions of authority in the workplace so that parent-friendly options become commonplace. Every single workplace should have part-time and flex-time options and make allowances for the realities of life, whether we care for a child or an elderly or sick relative.”

The interviewed moms expressed wishes for increased childcare options and more opportunities to use their talents in the workplace. What this will look like for the future world of work remains to be seen. But as Gaylene Weidlich points out, a bigger challenge for women is to “stop feeling so inadequate and comparing themselves to others. Working from home would be a great option but when there are small kids around, it is nearly quite impossible when you’ve got kids pulling at you?but I’m so glad I made the choice to stay at home with them. Work will always be there in some form. I think we in society tend to forget that. And just because I choose a career path, it doesn’t mean it will be my career forever?that goes for men as well.”

Carla is a proud AU student mom to an 11-year old son. Her occasional indulgence, in between working part time and slowly completing her English degree, is catching up with her favourite British television shows. 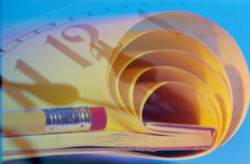