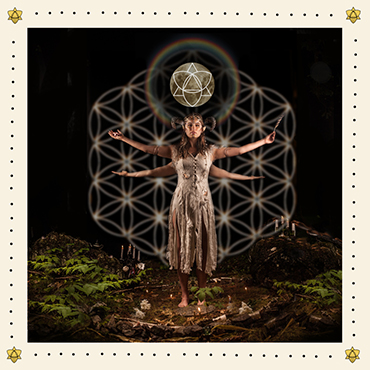 The lyrics of these songs are so brilliant they’re scary, manifesting an old-soul spirituality and indicating an extensive erudition. “Magician Man,” for example, presents the story (whether intentional or not is hard to tell) of that part of Plato’s Republic often referred to as “The Sun, the Line, and the Cave.” Plato states that most human beings don’t see reality as it is, but as shadows projected onto the walls of the “caves” they inhabit. The true thinker leaves the cave and sees reality face to face.

In “Magician Man”, a young magician makes paper creatures and uses them to perform shadow plays on the walls of a cave. The chorus pleads on behalf of the true thinker: “Magician Man, I see you working. Now I ask you gently: ‘Can you lead me from this cave? Lead me into light, because these shadow stories are getting kind of old, and your magician eyes can’t hold me anymore.'”

Montreal-based bandmembers, Christina Enigma and William Moon, sound like they rode into the universe on a magic carpet. Their wall of sound is so authentic, so passionate, so powerful, and so self-confidant that It’s in danger of morphing into its own religion, or at least becoming too esoteric to be taken seriously. But the music, beautiful and innovative as it is, is there to support the lyrics and their message, which is an ancient one: Turn inward and become aware of what can’t be perceived with the senses alone, because truth is safe, loving, and full of light if you can only see it face to face.

Why do they call it electro-folk? Elecronic and acoustic instruments are both front and centre, and the sound experiments are unique and engaging, but the folk aspect prevails. The guitar is as lovely and resonant as Joni Mitchel’s early recordings, but It’s played hard, almost angrily.

“The Circle” starts out with Moon and Enigma jamming clumsily on what sounds like a toy piano and an untuned guitar. The music gains consonance as it moves into repeating the prophecy, “We are moving into magical times.”

The title of the track “Samsara” denotes the cyclical nature of being, often interpreted to mean reincarnation. “I am an infinite self, I am eternal,” the lyrics explain. “And if your bones should turn to dust, so that your soul might ride the wind, you’ll find that death is a warrior’s life; You’re going home.”

“Cosmic Serpent” reveals a way of thinking arrived at by all mystical souls after years of contemplation: “We are pieces of the sun? we are God. Let my body be a temple? set me free.”

The spiritual concepts presented in this album are profoundly stimulating artistically, being closely related to the creative process. But they may not be around for long.

Rhapsodic folk music and metaphysical poetry both tend to flourish, as does all romantic art, during liberal epochs, and recent events indicate that the liberal fabric of North American society is getting a little motheaten. Best listen to KyAzMa while you still can.

The Magician’s Mirror manifests eight of the Mindful Bard’s criteria for music well worth a listen.

– It’s authentic, original, and delightful.
– It poses and admirably responds to questions that have a direct bearing on my view of existence.
– It provides respite from a sick and cruel world, a respite enabling me to renew myself for a return to mindful artistic endeavor.
– It’s about attainment of the true self.
– It inspires an awareness of the sanctity of creation.
– It gives me artistic tools.
– It makes me want to be a better artist.
– It makes me appreciate that life is a complex and rare phenomena, making living a unique opportunity.

What Can We Know?