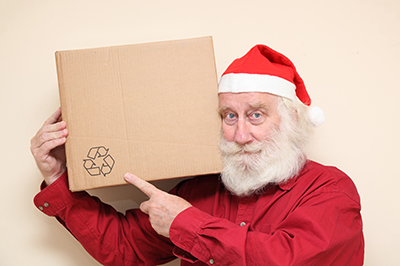 It’s a practice many people engage in but loathe to be caught at. we’re not talking about picking one’s nose, singing in the car, or pocketing a few extra restaurant ketchup packets for later. we’re talking about re-gifting.

Re-gifting is simply the practice of giving, as a gift, something you yourself received as a gift. Re-gifting has a bad reputation. Some see it as cheap, lazy, and in bad taste. However, that depends on the reason behind it. Re-gifting can also be practical, time-saving, and, yes, even thoughtful.

We’ve all received gifts that we can’t use: items that aren’t to our taste, don’t match anything we own, or we already possess. So we end up tossing them out of sight into a drawer, closet, or basement box.

There are more environmentally-friendly ways of dealing with unwanted gifts: reduce, re-use, or re-gift.

Don’t accumulate unwanted gifts in the first place. If you’ve received something you’re absolutely sure you can’t or won’t use, make a decision on it right away. Can you exchange it for something else? If you’re on good terms with the giver, tell them the item isn’t quite right. They gave you a gift hoping you’d like it and, since you don’t, they’re probably happy to help you find something you do like. They may choose to return the item themselves, or just give you the receipt so you can exchange it. Even if you don’t know the gift-giver well enough to suggest exchanging the gift, you might be able to exchange it without a receipt at a retail outlet that stocks that item.

Just because the gift wasn’t to your taste doesn’t mean it won’t suit someone else. Think about family members, friends, co-workers, neighbours. If the gift would suit them, ask them if they would like to have it. Be honest about how you came to have it and make it clear you don’t want anything in exchange. By re-using, you’ll get a good feeling because you brightened up someone else’s day, and they’ll get a good feeling from getting an unexpected treat.

Re-gifting isn’t gifting, but it’s a viable alternative in a pinch. If you’ve ever found yourself unexpectedly empty-handed when a gift was needed, you’ll appreciate the art of re-gifting. Perhaps a family member shows up with a new significant other and you need a gift quick, or you’ve received a last-minute invite to a New Year’s Eve party but you don’t want to show up without a hostess gift. You don’t have time to shop or to think. This is when the pen set you received from a client or that kitchen gadget from the office gift exchange comes in handy. Put a new tag on it and you’re all set.

Re-gifting should be done thoughtfully. As advised on emilypost.com—which frowns on the practice even while acknowledging it—the great thing is to avoid hurting anyone’s feelings. That means that neither the person who originally gave you the gift nor the person you are re-gifting it to should ever know. Remember who you originally got a gift from and make sure that you re-gift far away from the original source.

Small-value items you received from your outer circle—acquaintances, co-workers, distant relatives—are usually the most suitable to re-gift.  Don’t re-gift anything that is damaged, outdated, or in poor taste. If It’s that bad, why pass it on?

Anything handmade for you, personalized in any way, or got with a great deal of trouble and/or expense is a poor candidate for either reducing, re-using, or re-gifting. Best to just pack the item away until the giver passes away. And, until then, remember to put the item on display each time the giver visits.

There must be enough unwanted gifts out there to fill a fleet of Santa’s sleighs. If you receive another gift that you can’t use, don’t just toss it in the closet. If you can’t reduce by exchanging it, consider—thoughtfully—re-using or re-gifting it.