Features
The Voice
The Nursing Changes 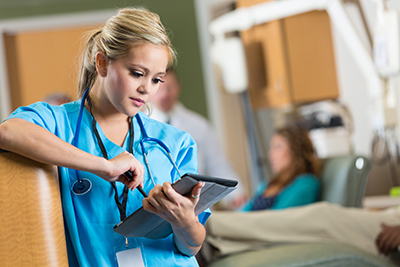 Angry, disillusioned, and upset are just some of the words that some of Athabasca University’s nursing students have used to describe their reactions to recent changes to AU’s nursing program. While the changes are, according to AU, part of the process to streamline and improve programs and services to students, these changes have led to an outcry because of the way they’ve been applied.

The changes began in January, 2016, when the Faculty of Health Disciplines (FHD) Faculty Council approved revisions to the Bachelor of Nursing (BN) programs. These included adding requisite courses, shifting the required GPA upward, changing the residency requirement, and the addition of a statement that students receiving two failing grades in one or more nursing courses will be automatically withdrawn from the program?with no opportunity to re-apply.
These changes apply primarily to the LPN-BN program although many are applicable to the post-RN within the Bachelor of Nursing.

While on the surface, these may seem reasonable, their significance is that they were going to be applied retroactively, and so would affect all of AU’s 2,140 current nursing students. These changes go against the usual protocol, where all students currently enrolled in the program aren’t affected by changes to the program, and any new requirements are only applied to future enrollment. AUSU President, Shawna Wasylyshyn, attended the January FHD Faculty Council meeting and was very vocal in raising concerns that the changes would negatively affect students and set a dangerous precedent for any other faculty’s changes in the future. Despite this, the motions were all carried and went on to be passed at the Academic Planning, Policy, and Standards Committee.

The changes also modified the way that the cumulative GPA for nursing students was calculated as it applies to prerequisites for courses. Even though AU has a policy on transfer credits and how the GPA is applied, a faculty representative confirmed in the AUSU’s summary of the timeline that they used the term “average grade threshold” for their pre-requisite requirements rather than the standard “GPA” to avoid being restricted by the AU policy on GPA that is in place to protect students. Under pressure from AUSU, the faculty has since backed away from the Average Grade Threshold determination and as gone back to using the proper GPA calculation.

Also since then, the AUSU Executive has repeatedly raised concerns about these retroactive changes and advocated for students hurt by the new standards. It has met with the Dean of the Faculty of Health Disciplines, the then-Interim AU President, Peter MacKinnon, the Interim VP Academic, and the Associate VP of Student and Academic Services. AUSU has also expressed concerns about these changes at General Faculties Council and the Academic Affairs committee of the Board of Governors. AUSU also has stated they have strong concerns because some of the student contacts they have been receiving suggest they are afraid of trying to bring these issues up to the faculty directly for fear of reprisals in their practicums.

The AUSU Executive team submitted FOIP requests for information to gain an understanding of what work was done by AU leading up to these changes: how many students were affected and to what degree, and what the root cause or motivation for the changes was. AUSU also consulted with legal counsel to gain advice on a further course of action and were advised that pursuing a judicial review is a recommended next step against the changes applied retroactively. Council provided unanimous support for the steps and AUSU wrote another letter to AU Interim President, Peter MacKinnon on September 7, 2016, informing him that AUSU was considering pursuing the judicial review. While there have been preliminary conversations with AU administration in response to this, no formal response has been received.

Dr. Margaret Edwards, Dean of the Faculty of Health Disciplines was contacted byThe Voice to provide more information about these changes from a Faculty perspective. She gave a lengthy and insightful response to the changes from a clinical perspective.

She said that due to the low pass rates of the NCLEX-RN (National Council Licensure Examination-Registered Nurse) exam, which is a required step in receiving the designation of Registered Nurse, the Faculty of Health Disciplines Post-LPN Program Council took immediate and proactive steps to better align the program to the reality of the new exam. Doing so to ensure that AU nursing students had the knowledge and preparation to succeed with the exam and ultimately in their professional practice as registered nurses. Dr. Edwards said that AU established a working group to coordinate information related to the exam and to identify where changes could be made within nursing courses to better align with the NCLEX-RN. These included a review bank of questions, quizzes, webinars, and other resource materials.

However, the nursing program realized that the current AU courses did not meet the needs of several areas of the exam; mainly anatomy, physiology, pathophysiology, and pharmacology. Therefore, additional program requirements were put in place to address these shortfalls. The changes were ultimately ratified in September, 2016. Dr. Edwards emphasizes that these changes were made to give all current and future nursing students the best possible preparation for the exam as well as their clinical practice. The changes were made retroactive to include all students currently in Cluster A of the Post LPN-BN program. She also emphasizes that transitioning students to the new regulations increases the opportunities to be successful on the exam and so receive their licensure as Registered Nurses.

She concedes that some students will require additional courses and their personal timelines may be altered. However, she says “completing a program and then failing the licensing exam and never being able to practice as a Registered Nurse is a far graver result.” She says that students were informed of the changes through a variety of means including a written letter; program newsletters; one-on-one discussions with the BN program advisors, Directors, and the Dean; and the implementation of individualized program plans. As the majority of nursing students have been in consultation with her department, she does not share AUSU’s suggestion that nursing students are afraid to speak with their advisors. She gives further insight to the changes by adding that implementing these changes at AU, rather than traditional universities, is more difficult. “At other universities, it is a much more straight-forward process to change courses when you know that the same students will be progressing in a lock-step manner through the program, rather than at AU when all but the four clinical courses are un-paced individualized study.”

But AUSU is still advocating for nursing students who are affected by the changes. It is calling for AU to honour the students’ original program plan and for the nursing program to grandfather in the changes to incoming students. While AUSU does not dispute the changes themselves, it disputes applying the changes retroactively. President Wasylyshyn says that “we have yet to see any research or proof that the changes implemented will have the result AU is seeking. At such a large cost to students, it is unacceptable for AU to blindly implement these changes which so clearly go against precedent and common sense.” While AUSU was assured that the changes were in students’ best interest, The Voice obtained the minutes from the January 28th, 2016 FHD Facility Council meeting. These minutes contained a statement that the reason for the changes was not only to maintain the academic rigor of the program, but to reduce the number of students in the program without imposing a quota.

AUSU’s position is that, while these changes may be required from a clinical perspective, the issue it has against the changes is the methods used to implement them, citing the ethicality of imposing prerequisites that would require students to leave the program or retake courses, as well as the short notice to students and lack of opportunity to prepare for the changes. AUSU says it has had many students come forward to express their concerns, which include feelings of being misled by AU and feeling like they cannot recommend AU to others who are considering becoming students because of what they have experienced. However, Dr. Edwards says that “?a key piece of information is that in the 46-year history of the university, retroactive changes have never before been made. The reason for the retroactive nature of the recent program changes related to the abrupt decision of CARNA to implement the NCLEX and we couldn’t, morally or ethically, let students already in the program continue down a program path that was not leading to success on the NCLEX.”

Despite the advocacy efforts on behalf of students, the AUSU Executive says that some students have lost credit for transfer they had previously been granted due to newly imposed residency requirements, and are also now required to take three extra courses, which affects their program plans?especially if they have taken out student loans. It also objects to the new rule that students who fail two nursing courses will be automatically removed from the program with no opportunity to reapply. AUSU has been successful on several fronts, including having AU commit to reviewing the policy, procedures, and delegated authority that allowed these changes to occur in the way they did. AUSU also has received a guarantee from AU that it will commit to a review of the process and authority for changes to course pre-requisites to ensure they can’t circumvent program requirements.

Also, some of the changes were postponed for one year and will not take effect until Sept 1, 2017 to give students an opportunity to prepare. Additionally, the FHD has made individualized exceptions for students who would be negatively affected by some of the changes, specifically the GPA change. AUSU pointed this out in one of their meetings, noting that when they’ve approached the FHD advocating for an individual student, they’ve gotten results for each one. AUSU remains concerned, however, that the exceptions have completely stopped, despite a commitment from AU to consider each student’s case. During the General Faculties Council (GFC) in October (the minutes are available to view online) the Dean and administration made a commitment to consider individual student cases. However, since then, the Dean has told AUSU that making an exception for one student isn’t fair to anyone, and, in a letter she wrote to students a few weeks ago, in the “FAQ” section, it says that individual cases will not be considered. AUSU strongly voiced its concerns about this at GFC on Dec 7 and demanded answers. It asked of the GFC, “Which is it? Are you considering individual cases, or aren’t you?”

So far, there has not been a resolution to the differences of opinion between AUSU and the AU Faculty of Health Disciplines. President Wasylyshyn recommends that concerned students should contact the AU Ombudsman or consider filing an academic appeal. Meanwhile, AUSU continues to survey the situation as it works to determine whether further advocacy is necessary.

Non-nursing students may not understand, or care, about the intricacies of the nursing program but this situation may become relevant to them. It remains to be seen whether retroactive changes to courses and requirements to one program may set a precedent for similar changes to other disciplines in the future.