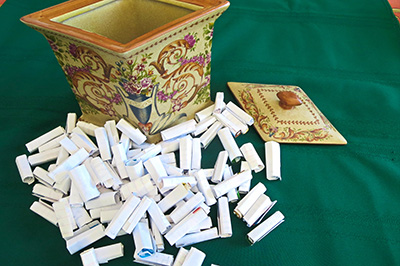 Did you take the #goodthings2016 challenge? In my article A Year Full of Goodness in The Voice Magazine last January, I wrote about my intent to keep a “jar of goodness” for the year. For a full year, I decided to jot a little note about one good thing that happened each day and add it to the jar.

It’s easy to forget about all the good things that occur over the course of a year. Some things loom large and are never forgotten. But little day-to-day good things are soon forgotten and the past year seems less rich than it was. Unexpected gifts, free lunches, draw prizes?they’re enjoyed for a day or so then swallowed up in the haze of time. Ditto for compliments, achievements, and bursts of fun. Forward-looking and focused, we think the past year?like an object in the rear-view mirror?appears smaller than it was.

I started my jar of goodness January 1, 2016. My plan was to add one note each day with something good that had happened. I didn’t manage to add a note every day, and there were long periods in which I neglected the jar altogether. Yet by the end of 2016 I had collected over 100 notes.

At the end of 2016, I enjoyed reflecting on the year’s highlights all over again when I opened the jar and unfurled all the notes. I was surprised to discover how many times I had won draw prizes last year, for example, or received thoughtful gifts or compliments. I certainly had not remembered how often I received unexpected cheques in the mail, a trend I hope continues for 2017. Reading the notes from my jar allowed me to relive the small moments of triumph and savour a year’s worth of achievements again.

All that goodness from one year. Or rather, less than one third of a year because I missed adding notes to the jar on more than 200 days. That means a significant portion of my good things from 2016 are likely forgotten forever.

For 2017 I plan to do better at capturing and preserving the good things. I’ve already started my 2017 jar of goodness and my aim is the same: to add a note each day describing one good thing that happened.

Will you accept the challenge for 2017? It’s not too late to begin. Right now, before you forget, find a jar, vase, or canister. Put it somewhere you’ll see every day. Place a small notepad or a stack of small squares of paper and a pen next to your jar. Record one good thing each day and by the end of 2017 you’ll have hundreds of #goodthings2017 to review. And 2017 will, in reflection, appear every bit as good as it was. 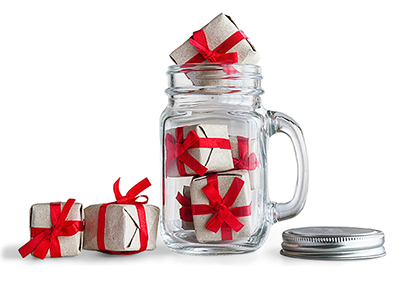 A Year Full of Goodness