Features
The Voice
Meeting the Minds – The Writer in Residence, Part I 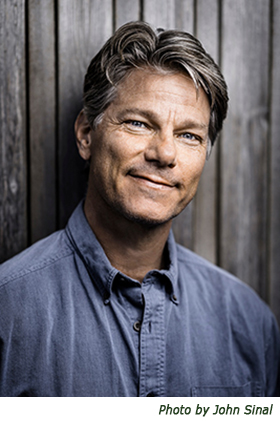 John Vaillant, author of The Golden Spruce, The Tiger, and The Jaguar’s Children, is AU’s 2016-2017 Writer in Residence. During his term as Writer in Residence, Vaillant will spend time providing feedback to AU students about their writing while also working on his next book about last year’s devastating fires in Fort McMurray.

The Voice Magazine freelance writer and AU student, Barbara Lehtiniemi, recently contacted Mr. Vaillant by phone at his home in Vancouver BC. Here is part one of that interview.

What made you decide to be a writer?
I think It’s like a lot of the arts: how much choice do you have? It’s always been in me to articulate what I see, what I feel, what I observe and understand, and writing is my preferred medium. Both in school and within my family, the written word was held in high regard. There were several writers in my family—although of a different kind—and I always had lots of opportunity to craft my own words. Communication as an art form was front and centre when I was growing up.

At university I continued writing. After I graduated I thought a good decision—the logical decision—would be to go on for an MFA. But I felt like I’d been in school long enough. At 22, I felt I needed to experience life. I wanted to get out and live for awhile. I didn’t write for 15 years.

So writing wasn’t your first career?
No, I had lots of different jobs. I was quite unsettled for a long while. I worked in Alaska with the commercial fisheries, worked with juvenile delinquents, was into music for awhile, worked as a janitor, worked at a school for the learning disabled, and worked as a consultant to large corporations on race and gender issues.

During those years, writing was always in my mind. I was always looking for stories in everything I saw or did.

At what moment in your writing career did you feel you’d “made it” as a writer?
Well, there’s something inherently tenuous about the whole enterprise. My first article published in a magazine was incredibly exciting, even though I was 35 years old and others were a lot further along in their careers. There’s something very exciting about seeing your first byline—seeing your name in print. But then I’m wondering, can I do it again? One thing leads to another; you just look further down the road, or for the next higher mountain.

When I had my first story in The New Yorker in 1990, then I felt like I’d made it. But I’d only been writing for two years. I didn’t really feel like I’d been tested. My second article with The New Yorker ended up turning into the story for my first book, The Golden Spruce. Still I’m thinking, can I do it? Does anyone really want to read a whole book about this? There’s a tremendous amount of uncertainty. Writing a book was another summit, another mountain.

Even when the book was well received, I’m asking myself, what do you do next? So there are moments of “making it” but no time really to bask in the glow. I need fallow periods—quiet time—to let the well fill up again. But writing, for me, is a continual act of conceiving, researching, and executing.

Describe any writing rituals you have.
Coffee is a wonderful part of it! The best times for me are in the morning. I find the best approach is to have as little to do with the internet as possible. It’s tempting to want to check e-mail and all that, but in order to create, It’s best to have the mind uncluttered. For me, the distance between bed, coffee, and writing should be as short as possible. Any compulsion to go on Twitter, Facebook, whatever, has the effect of pulling me out of the creative process.

During your time as AU’s Writer-in-Residence, you’ll spend part of your time working on a non-fiction book about the Fort McMurray fire of last year. What attracted you to that topic?
Just the intensity of the fire, the magnitude of it. Alberta is really the land of fire. The size of fires there have been incredible. And there’s the energy: on one hand you’ve got the boreal forest and the energy of the fire, and on the other hand, there’s all that oil and the energy it represents. Then there’s the people with this ferocious work ethic. The story of the Fort McMurray fire—those who experienced the fire, fought it, survived it—struck me as a powerful way to look at human nature and ambition really being put to the test.

I’ve also been looking into the early history of oil exploration. What strikes me is how quickly oil—and I’m talking crude oil here—went from a mysterious substance that people would rub on their joints to cure rheumatism to something actively traded and speculated on. We think of the 19th century as so much slower-paced. Yet, oil was discovered and exploited all in a matter of months. It’s similar to the explosive growth seen in some internet IPO rollouts. These boom periods repeat themselves, and we saw a similar acceleration in Fort McMurray in the late 1990s and early 2000s.

Part two of The Voice Magazine‘s interview with John Vaillant follows next week, in the January 27 issue.