Articles
The Voice
Dear John – I So Admire Your Big Heart 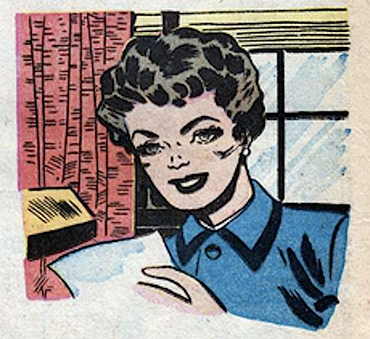 I’m sorry to have to tell you that this is the end.

I’m breaking up with you because I now know that your heart isn’t with me? It’s with Annabel. This became glaringly clear tonight at Soupy’s after several attempts at a romantic discussion were interrupted by her texts? texts that apparently had to be answered right away. I felt like a fool sitting there all gussied up with my carefully engineered cleavage while all your spellbound attention was being funneled into a little black smartphone.

But I must say, I so admire your big heart! You’ve fallen for a woman with an anteater’s nose, little red pig eyes, and a shapeless body, a woman who doesn’t know who Tolstoy was, a woman who’s been deliberately unemployed for the last ten years and who does nothing but whine about her revolving-door love life. It takes a very special man to love a woman like that.

You’ve done a wonderful thing by being her shoulder to cry on, her savior, her faithful knight. I see it as just one more sign of your generous nature. I do hope that you and Annabel will be very happy together.

Conspicuously positive outcome: Jane moved to Toronto, where she quickly climbed to the top of the career ladder. She soon cultivated a small circle of the most enriching friends imaginable, all of whom thought the world of her. When John saw vacation photos of her on Facebook, surrounded by beautiful people in Cuba, he went on a bender. He went to Annabel for sympathy, but things got awkward fast. As usual he blamed his troubles on God, asking, “Why me, Lord?” until his friends were sick of hearing it.
_____________________________

So sorry, darling, but this just isn’t working for me. The fact that my birthday, our relationship anniversary, and Valentine’s have passed without so much as a bouquet? well, it kind of says something, doesn’t it?

But you know what else says something? Your good manners. You’re so kind and considerate of others that it blows me away sometimes. For example, when Shirley waits on us you always smile and joke with her, and then when we get up to leave you stand close to her, lean in, joke some more, and give her a huge tip; all of these things just go to show how very gracious and thoughtful you are.

Apparently Shirley also thinks highly of your thoughtfulness because last night when we were sitting there talking and eating our gumbo she stared at us constantly. And when she came over, interrupted our discussion, and began talking to you, completely ignoring me, it was clear that your charm and politeness really meant a lot to her.

You allowed her to stand there and talk with you for twenty minutes. Amazing! What kind of man has that kind of patience? I thought it as good a time as any to to go to the loo, but when I came out she was still there. Afterward, when I asked you what she talked about you told me she was sharing her frigidity issues. When I pointed out how inappropriate it was for her to be discussing this with a man she barely knew, a man who was en couple to boot, while ignoring the other customers, you quickly came to her defense, saying she was suffering, the poor thing, and that I was being a battle axe. My hero!

I respect your compassion. I don’t think I’ve ever met someone who could be so considerate of others, with your kind words, tender smiles, and big tips. It’s not many men who would care about a bubblehead waitress who clothes her obscenely gargantuan derriere in leopard pattern stretch pants. But you do, Walt? you alone seek to understand her and listen to her problems while keeping your girlfriend waiting.

Smiling approvingly as I head out the door,

Conspicuously positive outcome: After reading this letter Walt went to the restaurant alone. He found tons of sympathy from Shirley and the two of them felt much better after ripping Ethel apart for her selfishness, jealousy, and lack of understanding. Soon Shirley left her unemployed husband for Walt, but when she discovered that his income was only enough to pay for rent and smokes she started nitpicking about little things. And contrary to both of their expectations, the iceberg didn’t thaw with a change of current. When Walt heard about how happy Ethel the nymphomaniac was with her new Latin boyfriend he wanted to kick himself.

I’m breaking up with you, honey. Yes. Why? Because every single time your “buddy” Natalie finds us she snubs me, throws her arms around you, holds you close, kisses you, and calls you her “poopsie-pie” while both of you giggle.

Yesterday when I blew up at you about this, you said, “But It’s okay, because You’re right there! At least we’re not doing it behind your back!”

I was so glad to discover you felt that way, because for the longest time I’ve felt guilty about making out with your friend Brad in secret. That’s why I’m enclosing this video.

Now that I know how you feel about these things, I’m fine. It’s okay because you can watch us. Enjoy.

Rollin’ in my sweet baby’s arms,

Conspicuously positive outcome: Jim went over to Brad’s place in a rage. He didn’t find Emily there, but he did find Natalie. He tried to give her a hug but she waved him away, saying, “Oh, no, I couldn’t do that in front of Brad. It would hurt his feelings.”

Emily continued to play the field.