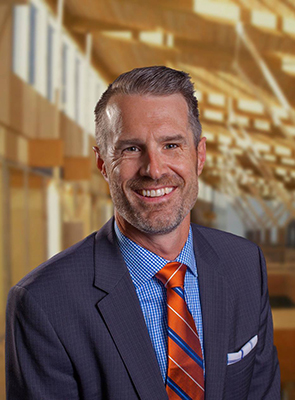 Dr. Neil Fassina is the 8th President of Athabasca University. He earned a BSc in Psychology from the University of Calgary and PhD in Management from the Rotman School of Business at the University of Toronto. He is an active researcher in the areas around applied decision-making. He was installed in mid-January, 2017 and works to remain connected to the communities that he serves. AU is no different. This interview was conducted in late 2016 prior to being officially installed as the 8th president of AU.

To set some groundwork, what is your family background ? culture, geography, and language?
I am Canadian by birth. Born and raised in Calgary, I am a true bringing together of multiple backgrounds as a Canadian. I have some French Canadian. I have some East Coast in my family. I have some Polish. I have some Italian. It is a bringing together of European cultures. I grew up in an English household. My mother and father grew up in Montréal. So, while I love to claim we were a bilingual household, we were bilingual at certain moments in time, but I never claimed to be one of them.

It is one regret of childhood, not taking that side of the language, seriously. From there, when I started into my higher education, I did undergraduate at the University of Calgary in psychology. I moved out to Toronto from there to do doctoral work. I moved back to Calgary as a visiting assistant professor. I come from a dual academic family. My wife has her doctorate as well. From there, we ended up in Winnipeg for just shy of 8 years at the University of Manitoba. We found our way back to Alberta into Edmonton. This time, I made my jump to Athabasca.

Before coming into AU, what was your image of the university?
A little inside scoop of a process I was going through here. When I finally accepted the role, they said, “We made an observation. There’s already a Neil Fassina in the system. We don’t know why.” I was a proctor for Athabasca University when I was at the University of Manitoba. So, I had an employee file in a way. There was a Neil Fassina in the system. Yet, there was only one Neil Fassina in Canada. So, it threw us for a loop. My image of Athabasca: it was a presence when I was at the University of Calgary. In that regard, my awareness of it as a learner was the same as visiting learners.

If you need to find a course or two, and they aren’t scheduled at your institution at the time, then you can go to Athabasca. Early on, in my academic career, it was from a more learner perspective. It was, “Wow! I can do that.” Spending more time in Manitoba and Ontario, you change your lens moving into the administrative side of things. You begin to see the mandate of Athabasca more publicly. The impression of it, if I might be so bold coming back into the province 5 years ago, it was a university facing a great deal of opportunity, whether or not you looked at it as an institution bringing learning to the learner rather than the learner to the learning, or whether or not you looked at its online presence and the strategic risk the university took when it made the move to an online presence, it took years for more residential universities to catch up.

It had the perspective of opportunities sitting in front of it. As time goes on, I heard very much the same things that all of Alberta began to hear with the challenges it was facing. It didn’t necessarily align with the perceived opportunities of the university in my mind. I could see why there was opportunity and challenge there. When I became part of the process, I became more aware of the nuance of it. Before, my general perspective was of a unique concept with so much potential. The duality of that in relation to some public challenges that were there.

What was your first priority when you took the position?
My main comment during the announcement process was to “hit the ground listening.” That continues to be a priority. I am spending as much as I humanly can to listen to the Athabasca University community, whether face-to-face communication, over the phone communication, or some of the reports. Any information is a priority to me. Universities often share similar characteristics, but there’s always nuances to each institution. It was important to me. It remains important to me how the different voices of Athabasca University come together to create the harmony of the university itself. What is its culture? Because it is the culture I am getting myself into, I am realizing that everything has to be done within that culture.

Speaking of listening to people and reading the reports, with the information you have so far, what do you see as the general perspective of the faculty of the university? Both its pluses and minuses.
That’s a great question. If I had to pin down some broad perspectives, to a person, there is an unbelievable commitment to the learners of AU. There’s a commitment to the mandate of AU and the ability to create that open, flexible, and accessible environment. There is a commitment to excellence at every corner in always wanting to make sure the learning opportunity we’re creating is the highest quality, and the research we’re doing is the highest quality. If I had to pinpoint a couple perspectives on the general perspective, those would be some of the strong points.

What about those in other administrative or leadership roles such as chairs or heads of faculty, deans, and associate deans, and so on?
There’s a recognition that there are obviously challenges there. I don’t think anyone is shying away from the fact that there are challenges. If I had to put the perspective on some of the voices that I heard, there is a commitment to reinvigorate around the academic mission of Athabasca University. At the same time, the attempt to find our path to a balanced point through some of our challenges, and always wanting to make sure we’re pointing in the direction of our next vision. It is similar to the comment on the faculty voices. It is a commitment to our vision and what our role is, and focusing on what’s possible and recognizing what we need to do to get there. So, as we start to look through some of the decision frameworks to overcome the challenges, we want to make sure we’re purposeful in the decisions. So, they’re moving into something else as well. It is the duality. Also, it is making the right decisions to move us into that future as well.

And students? Both groups such as AUSU and AUGSA, and of course the students themselves? What are you hearing is their perspective on the institution?
From the undergraduate and graduate student perspective, I am hearing things come back to the role of Athabasca University. They need to create that flexible opportunity. The students want to be committed to the future of this institution and the future success of AU. They want to make sure their learning opportunities continue. They want to make learning opportunities for our learners of today and learners of tomorrow too.

I had this pointed out in discussion with interim president of AU, Peter MacKinnon. We discussed some of the 2010/11 statistics about the undergraduate student body of AU. Some were that 2/3 of students are women with the average age being 28-29, and about 3/10 having dependents. Do you think we’ve tapped into something for single parents—the majority of which are single mothers—in terms of the ease of access to education through digital technology?
You know what, Scott, I am going to agree with you, and build on it. One step further, it comes back to the mission. Absolutely, we’ve taken a role in the postsecondary environment. It is unlike traditional residential university roles. In that we enable the opportunity for people who cannot, or choose not, to learn at a traditional “bricks-and-mortar” university. So, whether or not it be their life circumstance that disallows them to learn in that environment, or cannot give up their commitments in life, or the idea of the learning coming to them as an individual is better suited to their learning style and enables them to learn in their community to leverage the community as a learning resources.

That’s a huge population, whether by choice or by circumstance, which AU provides a unique learning opportunity to be able to access the university-level education for that group of people. If I might be so bold, we talk about traditional learners within the system being the individuals that attend a traditional residential university, but I might venture that the majority of the adult learning population that fits into wanting the learning to come to them because they are in a life circumstance where it better suits their current environment. I think It’s a huge piece in front of us.

Look for Part 2 of this interview in next week’s Voice Magazine.