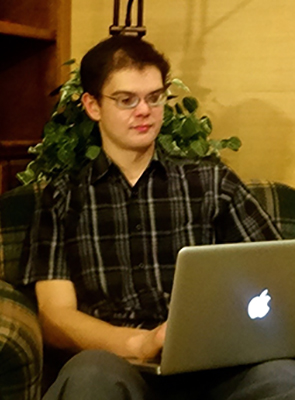 Dakota Soares was homeschooled until Grade 12. His educational path has been geared to earning a degree at AU. So, he started taking courses in high school to eventually start classes at AU. Last September, he signed up for the Bachelor of Science in Computer Science and Information Systems. For his day jobs, he raises and sells chickens and, on the side, runs a computer business.

What do you do like to do when you’re not studying?
I like to play around with my computers. Also, I like to do a whole bunch of extracurricular activities. I like to play guitar. I have played for 12 years. I also play the banjo. Most of the time, I am outside. I am a becoming a member of the Great Lakes Poultry Association. Other times, I am taking care of my chickens.

What famous person, past or present, would you like to have lunch with, and why?
That’s a tricky question. I know so many people?to pick one would be difficult. I would probably say, in modern history, Bill Gates, Microsoft’s Founder and CEO, and Steve Jobs. Those are two examples. Not going back too far, probably those two.

What would the meal be with either Bill gates or Steve Jobs?
The classic North American meal: pizza. I am Portuguese, so if I can entice them to have some octopus, shrimp, or lobster, that’s always good, if they would be with me on that.

Who in your life had the greatest influence on your desire to learn?
I think my parents. I think both of them have driven me in my ability to learn. Mom has been especially great in that area. My grandparents, too. My desire to learn is based off the immigrant desire to do better themselves and their grandchildren. I would like to take that desire, move it forward, and surprise them with what I can achieve, as well as give back to the family for what they’ve done for me. Another reason would be the desire to have a better life for my children in this country as well.

Describe your experience with online learning. What do you like or dislike?
I like it. It is flexible. I can do it anytime. For me, I am not an A+ student by any means of the imagination, but I like the flexibility of doing one course or three courses. I like that I can take any program I choose at any time. Personally, my experience has been great. I’ve had no problems with the web-interface. It’s probably about a 24-hour wait between answers from tutors, and that’s one thing I don’t particularly like. It takes time for them to get back. But when they do, you get your answer. I have a bad internet connection and that is another negative. It’s not the greatest, but nothing terrible.

Have you had a time when you wavered about your education?
No, most of the time, I have thought about what I would do after the degree. What is planned after the degree? I want to get a second degree to extend my portfolio. If I was to waver on something, it would probably be my math. Thankfully, the degree doesn’t have a ton of math, and I think it should be fine.

What was your most memorable AU course?
I’ve only done 4 so far. Probably, the most memorable one would be Administration 233. Because it is writing and presentations, something I do well. It is probably memorable because I could get a week’s worth of work done in one day. I couldn’t do that in high school.

What have you given up to go to AU that you regret the most? Was it worth it?
I would say it would be worth it. I know AU has had some issues with finances and the Board of Directors. The worst case scenario is that it might have to close. But it has set a precedent that will continue though. Online learning will continue. To have an online degree, is something most people gloss over. It’s not prestigious or anything, but I think AU will become more prestigious, especially since most students are the forerunners of online education. In 20 or 30 years when online education is the norm, we can say that we got our degrees from one of the first almost completely online universities in the world, when not many others were doing it.

What’s the single best thing AU could do to improve your student experience?
I think physical textbooks. I don’t want to be a bummer or anything. Online is fine. As online students, we are online enough. I would love to have physical textbooks. Even if we were given them on a loan system and we would give them back, even for the duration of the course, in my opinion that would be better then an e-textbook.

What is the most important lesson in life?
I would say being able to learn. Also, listening and watching other people and how they tackle things in life, and see whether it turns out ill or turns out good. Also, the ability to decipher what they do, so that you don’t repeat their mistakes. And if it’s a good decision, then it is something you can replicate in your own life to get a desired result.

E-texts or textbooks? Any particular reason(s)?
I would choose a physical textbook because there’s nothing like holding the book and being able to read it. Also, there is the ability to take notes in it. Whereas, when you’re on the computer, you can make highlights on it, but need a separate Word document to make notes. Physical textbook just gets you off the screen. We’re on the screen enough being online and all. The more we can get a substitute physical textbook and take notes and do assignments, and then read a little bit. That balances out the study time in terms of eye strain. That way I can get more done. I don’t have to take a 10-minute break every hour. I can take a half-hour break by reading my textbook and then jump back on the computer and continue again.

How do you find the tutors?
I find the tutors great. Probably, the tutor I would shout out most is Mr. Sam Fefferman from Mathematics 216. He’s been helpful. He’s been responsive. I have been able to get a positive response within 24 hours. That being said, the Faculty of Business actually called me last week and asked me how I was doing. I was very pleased at that. I would give them a definite thumbs up for that. It is great to hear someone not through email.

Where has life taken you so far? (travels for pleasure, work, etc.)
I have not travelled abroad. Unless, you want to call the States abroad. I have been to Florida, Montréal, and Ottawa. Life has not taken me around the globe. I don’t see it taking me farther than Ontario. Maybe, the West of the country, but I like to keep it close to home.

What (non-AU) book are you reading now?
I tend to be a philosophical and political science person. I am reading The Miserables. That’s a book from the 16th/17th century on The French Revolution. For the third time, I am reading DK Press’ World War II (Willmott, C. Messenger, R. Cross). It is an encyclopedia-like book overviewing WW2. Other than that, I haven’t been doing much reading other than the study material.