Columns
The Voice
In Conversation with The Wintyr 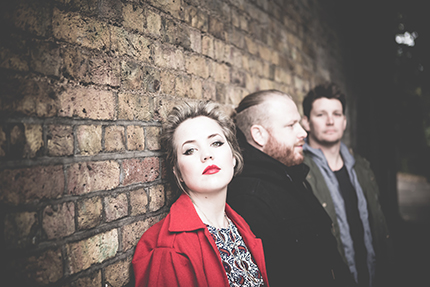 The Wintyr is an alternative folktronic group based in both London and Cape Town.

Band members Evelyn Hart (songwriter, vocals/synths), Tristan Carmichael (synths/guitars), and Brendyn Rossouw (percussion) met in a studio session for Hart’s solo career, and, after discovering how well they clicked, they decided to form a trio.

They released their first album, Fury, on March 10. In the video for the track “Followers” the gorgeous cinematic sound is matched with awe-inspiring aerial photography. Evelyn Hart’s strong, agile voice delivers lyrics that are both engaging and meaningful. The Wintyr’s frontwoman, Hart recently took the time to answer our questions about the band’s special sound and how it came about.

How did you develop that unique sound?
As a band we were lucky enough to work with an amazing producer from the song writing stage, a guy by the name of Jeremy de Tolly. He introduced us to some really interesting sounds and artists, and this stretched our musical capacity in huge ways.

From there we just experimented with tons of different instrumentations, building on my original songs. We delved deeply into Nordic and Icelandic producers, avant-garde electronic music, and loads of fringe performance artists.

If you had to give your music a genre, what would you call it?
We like to call it “cinematic electronica.”

What’s the story behind “Dark Hill?”
Much of my song writing is a plea for the listener to reflect on themselves and their lifestyles, to know and understand what they believe in and why. “Dark Hill” is a song about choosing to face your demons.

How easy is it for a woman to break into the music industry?and stay
there?these days?
As a woman, I think It’s about experimenting with your art and being able to stick to your convictions. There’s no one like you on the planet, so don’t imitate. don’t be too worried about being original or clever or impactful; first, focus on being you. Everything you do will then be strong and have meaning because It’s authentic to you. Tell your story and have a testimony. don’t be ashamed for having a different view on life. That’s why we need art; It’s about expressing how you see the world around you. It should challenge and also comfort.

Which city do you find more creatively stimulating, London or Cape Town, and why?
Coming to London is always inspiring, as the music scene is much bigger, more varied, and much more active. There’s so much happening and so much talent that it really opens the doors to what You’re also capable of. Cape Town is a small city in comparison, and the scene is also very small. But there’s an edge about living in an African city That’s also so stimulating; It’s an energy and a buzz you can’t describe. There’s no comparison, really!

What conditions do you require in your life in order to go on being
creative?
Time and space to sit and create. And good coffee!

Are there any books, films, or albums that have deeply influenced your development as an artist?
Music for film has always been beautifully motivating and inspiring. The love of cinema really drove us as a band! We also love Sci-Fi themes and all of the aesthetics that come from that; deep space, star gazing, retro ?80’s memorabilia.

Do you feel any desire to straighten out the world a little with the art you make?
Definitely! Though I think the greatest impact you can have is to help a listener to examine himself and ask the deep questions. If more people on this planet were aware of one another’s pain, I think there would be less war and strife. I feel a particular calling to this. Listening to music is like deliverance.

If you had an artistic mission statement, what would it be?
To make people feel and make people see.

Tell us about your current and upcoming projects.
As a band, at this point we’ll be doing more writing for upcoming singles and also prepping to play the new album to local audiences.