Articles
The Voice
The Vinyl Revival – Sentimental Journey or Path of Resistance?

Last year sales of vinyl records were the highest they’ve been since, well, since compact disk sales first surpassed vinyl in 1988.

To better understand the complex of causes surrounding vinyl’s death and resurrection, let’s go back and look at the history of the writing pen.

Dip pens had been around for hundreds of years, but, in 1883, Lewis Waterman of New York developed the capillary feed fountain pen and created a special ink that could be stored in a cylinder, falling just fast enough so that you could write evenly without having to dip the pen in an inkwell.

Ballpoints were invented not long afterward, and as time went on they replaced fountain pens. They were cheaper, and they had this wonderful new mechanism– a tiny ball that turned, releasing just the right amount of ink. You didn’t have to buy cartridges or refill them yourself. When they were empty you just threw them way.

It didn’t matter that the early ballpoints were crap: They would leak out if left in your purse or pocket. They ran out of ink fast. Their slipperiness made it difficult to write neatly. It didn’t matter; they were the new thing. They represented progress.

Progress was something we’d been lead to believe in so passionately that we were sitting ducks for marketing ploys, ever ready to chuck our valuable goods and open our wallets for the next milestone in a product’s history.

Which brings us to compact discs. As soon as they appeared it was widely acknowledged that this wonderful new technology would replace cassettes and vinyl. The CD was small and portable, as were its players. It didn’t skip, supposedly. The sound was great, we were told, better than analog because it was made with digital technology, which just had to be better, allegedly. Audiophiles who insisted the sound was different were held in derision.

In retrospect, it appears CDs and MP3s were not the wave of the future we’d imagined, but just more blips on the screen, like 8-tracks and cassettes. Because, according to discriminating listeners the word over, vinyl is still the real deal.

The wide acceptance of compact discs as the go-to musical format to the exclusion of all others shows how stupid we humans really are. (Okay, so it wasn’t just our stupidity; the record companies jumped tall buildings to ensure that retailers sold more CDs than vinyl, but hey, we let it happen.)

The CDs skipped all over the place. There was no room in the jewel case for the posters, stickers or other paraphernalia that used to come with 12-inch disks. Worse, the plastic “hinges” broke apart on the third use. You couldn’t sit and hold a CD, admiring the art and checking out the fine print (which on the 12-inches often contained brilliant nuggets of wisdom and humour). There was no delicious needle ritual or sacrosanct orders to all in the room not to bounce around.

And the sound was not as good as analog. Digital recording technology can never reproduce a whole soundwave the way analog does. Digital technology records soundwaves as a series of numbers, whereas analog records the soundwave as a continuous line, i.e. 1, 2, and 3 plus the infinite number of points between them.

Aside from the aesthetic attraction, listening to vinyl has slowly become seen as an act of resistance. It’s a great way to yank a little power away from a music industry That’s grown too big for its britches, an industry That’s become more about the dollar than about creating beautiful sounds. 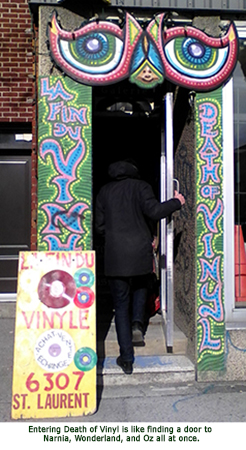 It took a while for the rebel spirit to wake up, and when it did the record companies were miffed. Compact disks were so much cheaper to make, and besides, most of the bigwigs had trashed their vinyl manufacturing gear. They world had moved on, as it were. Why were these punks, hip-hoppers, and neo-hippies clamouring for bygone technology?

Then came downloadable music, another act of resistance that the record companies fought like the dickens. It felt wonderful to download Anne Murray’s “Buffalo in the Park” because it helped me relive the childhood experience of playing the album while holding the cover in my hands. It still feels good to know that if I want to check out a new band or album I can just go to iTunes and listen to previews.

But if I really like a new band, I want to hear it, if not live, then on vinyl. Not only do I want it on vinyl, I want to find it in a place where the buying experience itself is part of the joy.

There are things that an indie record store offers that you can’t find online, the main one being the opportunity to go back through your favourite musical eons and find records you hadn’t known existed. These recordings form an unparalleled arsenal of creative inspiration, and this is the only way you can get it because according to the estimation of the brilliant documentary I Need That Record! The Death (Or Possible Survival) of the Independent Record Store, 50% of all vinyl albums made have never made it to digital format. (True, music downloads have walloped CD sales?except for all that music that can’t be downloaded because It’s never been recorded to a digital format.)

Walking into a good record store is like entering a portal. Record store people (the nice ones mind you, not the condescending music Nazis) are among the coolest people on this planet. Take Steve Lüdvik, a tall drink of water with hair half his height and a serene spirit that practically spews positive energy, who co-owns Montreal’s Death of Vinyl (La Fin Du Vinyle) with Dan Hadley. (The store was named after decades of predictions that vinyl was done. Pshaw to that.)

A friend of Steve’s once described the store as “An oasis of cool in a world gone mad,” which is completely apt. The place is dimly lit but somehow full of colour, atmosphere, and the most amazing collection of music?vinyl, cassettes, even CDs (no snotty purists here)?and books imaginable.

Steve is a veritable Alexandrian library of bygone pressings. When I ask him to show me something in late-?60s-early-?70s art rock he tells me all about Soft Machine, a band I’d never heard of despite loving this subgenre. I then test him for contempt by asking for old country music. He proudly brings out the Lefty Frizzell, Skeeter Davis, and Hank Snow, without a hint of a sneer. 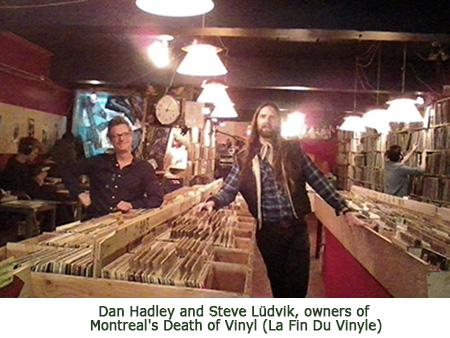 Steve started collecting records in his teens, just before compact discs started outselling vinyl. “In ?88 or ?89,” he recalls, “people were getting rid of their records, like they were a disease, to make way for CDs. I would go into all these record stores. It was almost like a golden age for buying and collecting records. I mean you could find multiple copies of super-rare records that we don’t see today anymore.”

There’s so much to love here: the fact, for example, that artists are allowed to display their work with no commission asked, or that the decor is so bohemian, or that the place is a great resource for local musicians and DJs, or that It’s just a great place to hang out. All because a couple of guys did what made sense to them alone instead of bowing to somebody else’s idea of progress.

May Dan and Steve and their ilk?and vinyl?live long and prosper. Amen. 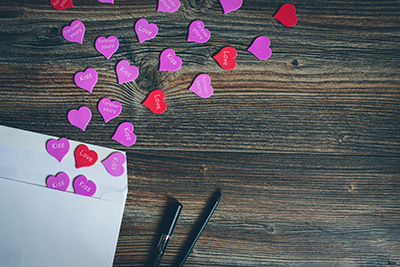