Columns
The Voice
In Conversation with LOVECOMMISSION 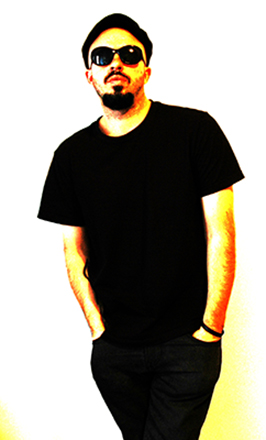 In Conversation With LOVECOMMISSION Wanda Waterman

LOVECOMMISSION is the pseudonym of New York singer, musician, and composer Pat Scarlett. Hesitant to identify his genre, he describes his music as “avant-pop” because, in his words, he doesn’t know what else to call it, but It’s has also been identified as shoe-gaze and is reminiscent of the sound of the Velvet Underground.

He’s just released “You Make it Alright,” a track from his upcoming debut CD Acid Dreams and War Machines, to be released this summer. Inspired by the breakup of a long-term relationship, the song is a tongue-in-cheek romantic disavowal, much like 10cc’s “I’m Not in Love” from 1975. Recently Scarlett took the time to share his insightful ideas on creativity, art, and authenticity.

Surpassing the ordinary by whatever means necessary
Scarlett’s musical experiences brought him to a place where he adopted music not simply as a leisure pursuit, but as a way of being, a way of transcending the mundane.

“In terms of real impact,” he says, “for better or worse, by the time music really started to direct what I was doing there was always that need to get out of whatever the fuck passed as ordinary, by whatever means necessary.”

He sees sex, drugs, and rock-and-roll as intertwined elements of the same idea: ways of enlarging experience, of getting beyond the mundane, the artificial, and the illusory and finding reality.

“Sometimes you have to get outside the box in order to see the box. You can have a spiritual experience tripping on LSD because LSD takes you out of what passes as ‘self,’ as typical. I advocate getting your head out of a culture of bling and bullshit and getting back to something real.”

Regarding Acid Dreams & War Machines
What does Pat Scarlett think about his first full-length album?

“When it comes down to it, I find that the closer you are to something?a sound, a project, whatever?the less insight you can really have about what it is. I prefer to hear what someone who hears it fresh has to say. The is the only thing that matters at the end of the day anyway.

No patience to smile and nod
Scarlett finds that the more he can focus, submerging in the work, the more authentic the work becomes. He tries to structure his life around his work and remove whatever doesn’t seem honest or real. He also feels the need to surround himself with the right people.

“I no longer have the patience,” he confesses, “to smile and nod in order to indulge someone’s delusions of self. I try to surround myself with people who are on a similar wavelength.

“I also donʼt have patience for anything less than authenticity. I recognize the irony in talking about authenticity while advocating recreational drug use, but itʼs an irony that Iʼm comfortable with. Truth be told, I find that people are often more authentic when theyʼre a bit loaded; it loosens the inhibitions and reveals the individual.

Being part of the tapestry that is New York
“New York has a few main contingents of people, says Scarlett: “those that grew up
here and keep this city humming its particular tune, those that come here for work
(businessmen, Wall Street-ers, etc.), and those, native or from wherever, that contribute something to the ever-changing tapestry that is this city?artists, designers, and Iʼd include anyone thatʼs inserting their own particular vision into the city.

“Like the guy that realizes a dream of opening his own coffee shop, the ballet student who gets up and busts her ass everyday just to move in a way that brings you to tears. Anyone That’s authentically bringing something new into this environment instead of just reflecting what they see or parroting opinion, I have a lot of respect for.

Absorbing what’s there
Scarlett feeds his muse by living life?getting up, going out, and taking it all in. He’s also been much inpsired by listening to music, both recorded and live, but doesn’t like to pinpoint the influence of any particular artist.

“Really though, if Iʼm in an environment that stimulates me, where I can avoid bullshit and the need to bullshit?thatʼs when my muse really starts talking. You have to be able to access whatʼs available, really open yourself to what is, and thatʼs when the most pure ideas?melodies, lyrical motifs, etc.?can come through.”

Artists as legwork
“I remember reading an interview,” Scarlett reflects, “with William S. Burroughs where he describes the writing process as more a question of transcription than any kind of ?invention.ʼ Thereʼs a guy that saw what he was doing and knew that, in effect, he wasnʼt doing anything.

Do what you do as well as you can do it
When asked about his potential contribution to the world at large, Scarlett is self-effacing.

“I feel that the only positive contribution I can make to the world, to anyone,” he says, “is to do what I do as well as I can do it.

“I think most of us associate some of the best and most intense moments in our lives with music. Thereʼs often a soundtrack there?a certain song immediately jogs a particular memory. There are songs that still absolutely floor me when I listen to them. And there are songs that inspire me, make me smile, unite me with a deeper sense of what it means to be human.”