Articles
The Voice
Editor of the Year – The Inside Scoop 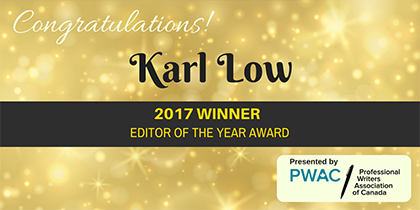 “Karl exemplifies all that an editor should be: a mentor, approachable, on-point with language and grammar, and above all, genuinely interested in and supportive of his writers.” – from nomination for PWAC Editor of the Year.

The Voice Magazine’s own Karl Low has been selected by the Professional Writers Association of Canada (PWAC) as 2017 Editor of the Year!

As one of The Voice’s regular contributors, I was delighted to see the recent award announcement from PWAC. I was doubly delighted because I’m a member of PWAC and was the principle nominator. As such, I’m in a position to give The Voice readers the inside scoop.

When PWAC put out the call for nominations this spring, I knew immediately that Karl exemplified the qualities described in the award criteria. According to PWAC, the Editor of the Year award “promotes outstanding Canadian editors and mutually respectful writer-editor relationships.” The judging criteria included an editor’s respect for their writers, excellent editing skills, effective communication, openness to ideas, and ability to work with writers to “bring out their best.”

I’ve been a contributor to The Voice for almost four years and I’ve worked with Karl regularly to develop articles, pitch ideas, and help keep the magazine’s content interesting and relevant to AU students. I felt Karl exemplified the spirit of PWAC’s award and decided to nominate him. But I needed help.

I approached two of The Voice’s other writers, Deanna Roney and Carla Knipe. Both responded within minutes, eager to help. I meant to contact more writers because I was certain others held Karl in the same esteem as the three of us did. But, as too often happens, the nomination deadline snuck up on me and so the task was up to me and my two co-conspirators, Deanna and Carla.

It was easy to come up with reasons why Karl deserved this award. The challenge was in the writing: crafting a compelling case to make this nomination shine above all others. With input from Deanna and Carla, I composed a three-page nomination. Since editing is far more than eliminating typos and correcting grammar, our nomination focused heavily on the editor-writer relationship. Excerpts follow:

Karl must surely have the most unenviable editorial position. Part of The Voice Magazine’s mandate is to provide writing opportunities to the students of Athabasca University. Since many of the contributors to The Voice Magazine are novice writers, Karl faces what few editors do: a revolving stable of writers of varying abilities, strengths, and interests.

Karl encourages new writers to submit articles for consideration. He works with inexperienced writers to strengthen their articles, provides detailed feedback and suggestions, and coaches them through the process from draft to published piece.

That he manages to nurture writers on top of the demands of publishing a weekly magazine is astounding. Yet Karl is never abrupt or dismissive. He’s willing to hear pitches for any article or series topic, balancing the needs of the readership with the goals of the writers. Karl encourages his writers to experiment, to find their voice, to grow.

Karl walks novice writers through every stage of the process. From writing and editing, to understanding publication agreements and copyright issues, Karl is a valuable resource for writers. He is approachable and answers all questions thoroughly and patiently. He gently pushes writers to expand their abilities in research and interview techniques, and to keep growing as writers.

“Many of The Voice’s writers are just beginning their writing careers. Karl takes the time to build up their confidence and their skills and he also challenges them to become better writers. It is a lot of work to edit their pieces with an eagle eye week after week; my goal is to not have any edits from Karl in my piece?but that rarely happens! But while a weaker writer might respond to the criticism with indignation that their work is being “torn apart” to that degree, writers who are serious about their craft will look at that criticism as a gift in order to make their writing better, and I think this is the case with Karl’s editorial direction. I feel that this has reflected positively in the overall direction and quality of The Voice and the reason why the writing team continues to take their mandate as writers reflecting on the AU student experience very seriously.” – Carla Knipe

“When I first took the leap to submit my work to Karl for consideration in the magazine it was an article that was not worth publishing. Instead of simply sending me a rejection, Karl offered me a critique and advice on how I could improve my writing. The next article I sent was approved. That was about two years ago, and since that day I have been a regular contributor to The Voice Magazine. If he hadn’t taken that moment to help me, to give me feedback, I wouldn’t be where I am today. Working with Karl has instilled a confidence in me to submit work elsewhere, to have faith in my craft, and he’s encouraged me when I’m concerned a concept might be too risky.” – Deanna Roney

Not only do writers improve their craft with Karl’s assistance, but they feel valued doing it. As Carla Knipe reminded me, “Karl appreciates his writers. He regularly says ?if it weren’t for you, I wouldn’t be here and The Voice wouldn’t exist.?” Karl regularly sends words of gratitude to writers, individually and as a group. As a writer, it doesn’t get any better than that.

As a final note, having had the occasion to work with other editors, I can say that Karl is the standard against which all other editors are measured. A writer’s job is never easy, but having an editor as competent as Karl makes the process of writing a pleasure.

(Note: I generally don’t like tooting my own horn, but it was pointed out that this could be good for The Voice Magazine, and might attract some attention and new writers. I’m always up for that! ? Ed.) 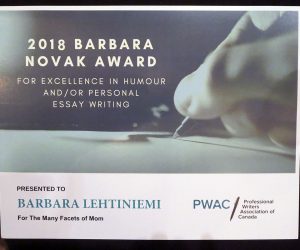 Editorial—It says “Best of” on the Cover for a Reason