Columns
The Voice
The Fit Student – A Gift at Prom

When life gives you an F, a gift manifests. When life scares more than Prom Night III, overcome anxiety.

Stress sharpens or shuts us down. During math tests, my stress fueled focus. I often made perfect grades. Yet perfectionism is a double-dealing friend. It opens the floodgates for fears of failure.

Workplace stress struck as I worked full-time while in grad school. The stress made simple tasks like bathing scary. Most people scrub in bubbles. Not me. After each shampoo, I’d forget what I just did. My motto was “rinse and repeat.” I think Dove uses that motto to make killings off of OCD.

Worse yet, I toyed with empty dreams. My biggest ambition was to miss less than three buses in a row as I sat spacey at the bus stop. The next runner-up? Not believing the bumps on the road to be human bodies.

Then a string of bad events struck me.

As my usual noon-hour panic attack loomed, my boss called me into his office. He hid behind his swelling red eyelids and whispered that we failed to get federal funding. My hands stopped shaking?I no longer had a job.

Over many months, I stressed searching for work. My stash of cash dwindled. My stock of medicine depleted. And then I got not one?but two? Koodo phone bills summing over six hundred dollars. The near-naked Koodo-cartoon-character jerked the shirt off my back. I canceled my plan and cashed my last RRSP.

Then, my elderly landlady went missing. After a few days, I called the cops who kicked-in her door. She had died of a stroke. When I identified her body, with the police alongside me, I called out her name several times, asking her is she was okay, reassuring her. No answer.

Frazzled, with no place to live, I reached the end of my employment insurance.

Over the next five years, I cured myself of panic attacks. I lost weight and gained skills. I eventually resumed fulltime work. Most of all, I nursed my boyfriend back to health after major surgery.

Maxwell Maltz in his book says to not overestimate harm?for often your worst ends as your best.
– Certain students blank out from stress during exams, but others feel energized; you can choose.
– Nervous (spirited) horses tend to win the races.
– React positively to crisis, and you grow; react poorly, and you miss out on skills.
– Say to yourself that you can deal with any trouble that strikes.
– Don’t run away from crises. Choose fight not flight.
– Don’t lose your way with imagined worries.
– Don’t overthink the possibility of failure. Failure marks an opportunity to grow.
– During crisis, we either grow or stay put. Choose to grow by facing fears.
– Consider your worst-case scenario and brainstorm reasons why things ain’t so bad.
– Say to yourself, “I have everything to gain and nothing to lose” (p. 242).
– When we face challenges fearlessly, we gain in strength and spirit.

To end, take comedian Judy Carter’s joke from her book Stand-Up Comedy: “[As] soon as I turn off the lights my house becomes a Stephen King novel. I think there is a man under the bed, a man in the closet, a man behind the door. I mean, where was he prom night when I needed him?” (p. 109).

So, if you get an F in life, face-off fearlessly with that failure. And claim the prize. 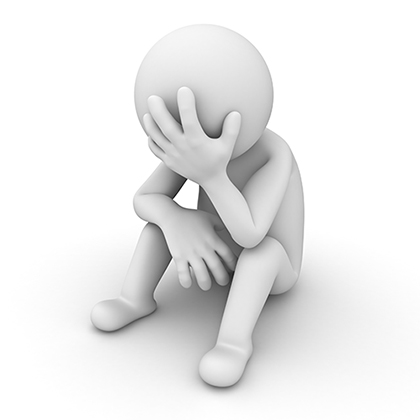 From My Perspective – Heart Scare!