Articles
The Voice
A Grain of Salt from the Japanese 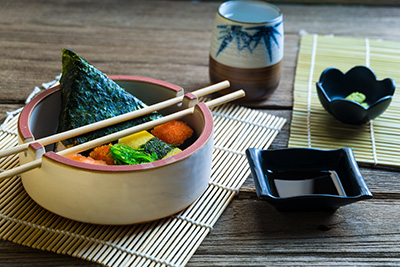 Ghandi once said, “live as if you were to die tomorrow and learn as if you were to live forever”. The Japanese certainly took the second part of the quote to heart. Living forever is a skill, and there’s a certain focus and rigor in the way Japanese people learn to master this art. The Japanese enjoy some of the longest life expectancies around the world, and suffer from significantly lower risks of heart disease and chronic obesity. While it may not be possible to mimic the same social, cultural, and individual health habits of the Japanese people, there are still some valuable lessons to be learned. Here are their top four secrets to longevity.

Hold your horses
In the 21st century, It’s inevitable that we enjoy doing things efficiently. The same idea goes for eating. The popular belief is that “If we save time doing x we could spend more time doing y. I am guilty of this, myself. This might seem hypocritical to say when I recently wrote about time-saving ways to cook, but the crux of the matter is, slowing down the consumption of food is as much about appreciating every bite as it is about well-being. Eating slowly forces us to think about our food choices and to gradually reduce our ever-expanding appetite for the sugary, the caloric, and the savory. Chewing thoroughly has also been shown to promote metabolism, as it reduces the digestive work our stomachs perform.

80 is the magical number
“Hara Hachi Bun” is an adage Japanese children grow up with. It translates to “eat until You’re 80 percent full”. Ultimately, eating until we’re 80 percent full serves to limit calorie intake. Culturally, being conscious about food intake has allowed the Japanese to reap many benefits. Research shows that mice live longer with daily caloric limits and unsurprisingly, this is seen in the Japanese. Perhaps this is the reason I find myself frowning at Japanese food portions, when instead I should be worshipping these carefully controlled servings.

Power breakfast
By power breakfast I don’t mean the legendary Michael Phelps breakfast featuring three sandwiches and six toasts followed by three more pancakes. Japanese opt for the small but powerful breakfast, which is considered in Asian cultures to be the most important meal of the day. Growing up, I remember being grounded for something as seemingly trivial as missing breakfast. The value of breakfast cannot be understated. The 102-year-old Japanese Centenarian makes breakfast her most significant meal with diverse proteins, fruits and carbohydrates. However, no portion amount exceeds the size of one fist. Lastly, the Japanese obtain fresh ingredients from local farmer’s markets to cook up a breakfast for champions (Johnson, 1992).

Go fish
When asked what everyone’s favorite protein is, I rarely hear fish being a favorite. Beef, chicken, lamb, and pork are what North American culture boasts of with its plentiful hamburgers, meatballs and BLT. The Japanese beg to differ. A diet consisting of fresh fish has been associated with lower rates of heart disease and cancer, which is exactly what the Okinawa (or Japanese) diet features (Koto, 1973). The secret is in the Omega-3 fatty acids, an anti-inflammatory agent that keeps our arteries unclogged and healthy. Think about these as natural detox agents for your body. Do you want a healthy heart? If the answer is yes, then go (eat) fish.

The Good Life – Wabi Sabi: Everything Old is New Again