Columns
The Voice
In Conversation with Christian McBride 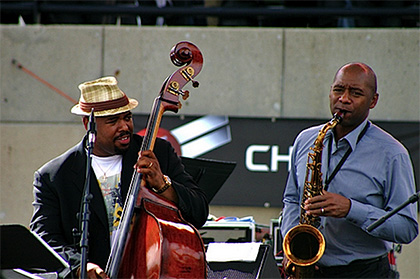 McBride was brought up in Philadelphia but studied classical music at the Julliard School in New York, where he was soon recruited by a major jazz band. His main project now is the Christian McBride Band, which started in 2000, but he’s involved with a number of other projects. The Christian McBride Big Band and Jazz House Kids is one of them: a community arts organization founded by his wife, singer Melissa Walker. He also loves mentoring up-and-coming musicians.

Just before performing at the 2017 Montreal International Jazz Festival McBride kindly agreed to answer our questions about jazz past and present.

Was your mentor, Wynton Marsalis, more about “all of jazz” than he was about any particular jazz era?
No, that was his brother, Branford. One of the great controversies of Wynton’s rise in the eighties was his seemingly narrow scope of what jazz was. He was very much not a fan of fusion. He was very much not a fan of avant garde. Us players in our teens, we were listening to those records of Miles Davis from the eighties, and Wynton was against that. He was like, “Put that crap away and listen to Miles from the fifties!”

While I didn’t agree with that then any more than I do now, I knew that it would probably not be a bad thing if I were to consider music from—I don’t want to say the Golden Age, but if I were to concentrate on a particular area of jazz that could help me develop as a musician while still making my secondary goal to stay on top of current trends and learning different styles of music, that would only make me a better musician. But knowing Wynton meant focussing on a particular period and style of jazz [the late fifties post-bop era].

Because of the new digital technologies we can, for example, know more about the blues of Mississippi in the thirties than did most Mississippians in the thirties. What effect has this simultaneity had on you as an artist?
Now that everyone has the ability to listen to any kind of music anywhere, at any time, there’s no excuse for aesthetic ignorance. There’s absolutely no reason why a person can’t have at least a pedestrian knowledge of any form of music, and if not, it just means they choose not to look for it. Sadly, I think that the more convenient things are the less people actually take advantage of that convenience, or they take it for granted.

Do you spend much time checking out new developments in jazz?
I try very hard to practice what I preach. I don’t spend ample time in searching out what musicians are doing in South America or Africa or Asia, or even have the time to go out in New York, where I live, to hear a lot of other musicians. Life is what it is and there’s no time to do that kind of stuff. But I try my very best to stay on top of things and be as curious as possible. There’s a huge, huge world out there.

Your touring schedule sends you all over the world. Do you ever get to hear what’s happening musically in the countries you perform in?
Yes and no. When You’re on a tour like that and You’re doing a different city every night, practically speaking you don’t have much time to do anything. You get to a city in the afternoon, you do a quick soundcheck, you do the concert, and then you can choose to either go out or go to bed and get ready to repeat the same cycle the next day. Travelling to all these places, you sort of only get half of what you could get, just because of time constraints.

Festivals give you more opportunities to go and hear other groups. I always try to go and hear local groups. Festivals in Italy or Bulgaria or Turkey always feature a lot of local music. I know for a fact that there are some musicians in Istanbul that are absolutely breathtaking

What conditions do you need to go on being creative?
If You’re working or travelling every day you do your best to put yourself in the situation where you can be creative and I think you should be able to be creative anywhere.

I’ve been playing with Chick Corea for the past 22 years, and I’ve seen this man write music on a bus, or at an airport gate waiting for a flight. That’s the discipline of making yourself stay creative. You hear people say, “I love being in a room where It’s quiet and peaceful.” That’s great if you can have that, but realistically That’s not always going to happen. People like Wayne Shorter or Pat Metheny—these people are creative no matter what’s going on.