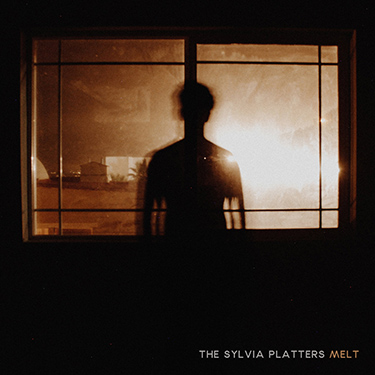 The Sylvia Platters, a four-piece, shoegaze/power pop band from BC, dropped their five song EP, Melt on June 23rd. The Sylvia Platters consist of Nick Ubels on vocals/guitar and Tim Ubels on drums/vocals. With the addition of Alex Kerc-Murchison on guitar and Scott Wagner on bass, this slacker rock band wrote songs and played shows around BC before recording Melt. This EP is a definite change from their first album, Make Glad the Day. Where their first album had an indie rock vibe, Melt is slower paced and focuses more on the feel of the songs than the melody. The addition of two new members mirrors the change that this EP is showing off. Melt is a perfect example of growth and change within a band. Rather than staying the course and playing it safe, The Sylvia Platters took their experiences from the last album and created something new and exciting.

Melt starts with the song “Eclipse”. This song is drastically different then their previous work. Though the melody is dark and dissonant, the vocals have a haunting quality that draws you in. It can be difficult to create a catchy song that has a slower pace, but The Sylvia Platters nailed their new style with this opener. Picking up the tempo, the next song, “Faith Healer”, has an uplifting ambience which is helped by the tinkling of the xylophone. The vocals on this track are more prominent then then “Eclipse”, however they both have similar tones.

Taking the role of the ballad on the EP, “Tangerine” uses moving guitar lines and staccato drum beats to create an emotional experience. Ballads can get lost in their own sentiment but “Tangerine” keeps you engaged by ending the song with an electrifying outro. “Utrecht”, the forth song on the EP, seems to take its styling from The Cure and Death Cab for Cutie while still maintaining the shoegaze feel. Melt may be a slower, more methodical EP but that does not mean that it is any less memorable. The final song on the EP, “Sunkissed”, shows off the dedication the band has to creating an emotional soundscape rather than a typical rhythm. This is showcased in the outro with off-beat synth work that creates a chaotic yet measured close to this amazing EP.

The Sylvia Platters have put a lot of work into this EP. Produced by A.J. Buckly in a snow swept February, this band has put their all into this project. A style change for a band can prove challenging, however The Sylvia Platters not only did it well, but took their listeners along for the journey. Melt can be found on their Bandcamp as well as on all of the popular streaming services, including Spotify and Apple Music. This is an excellent EP and I strongly recommend checking both it and their past work out.