Articles
The Voice
The Fires Burn On 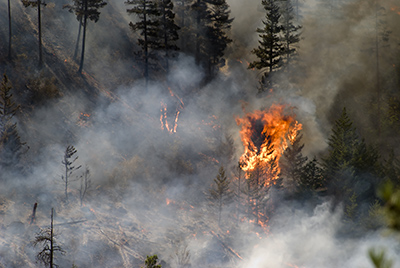 Over the weekend the fires in BC continued to grow in size and number. Athabasca University has a plan for students affected by natural disasters, if you are being directly affected please contact the Student Union they can help you.

The number of evacuations grew substantially. The city of Williams Lake, as well as the surrounding area, was put under an evacuation order. Loon Lake was also evacuated due to another fire, and homes in Lake Country were evacuated because of a new fire that started on the weekend. These fires are impacting thousands of people, Williams Lake’s population is about 11,000, not including some of the surrounding area that fled as well. That meant that the escape route out slowed to a crawl.

The original plan for residents of Williams Lake was to travel north to Prince George, but when the fire jumped the river those plans had to change bottle necking two separate evacuation orders. The estimated total number of evacuations in BC, including those around Prince George, is 37,000 people (CTV News).

Fearing the loss of your home is bad enough when faced with wild fires, but another concern for residents leaving is the possibility of looting. Taking advantage of people facing a crisis is bad enough, but another part of it is that it means some people won’t evacuate, staying instead to protect their homes and their livelihoods from the potential looters in the area. It is contemptible how much this is going on in these areas. And how much more pain it is inflicting on those that are really dealing with enough.

It isn’t just the misguided that come out during these events though. There are people risking their own safety to go into closed areas and help others, they are loading up horses, pigs, chickens—anything they can—and giving other people space on their property to house themselves as well as their animals, and tending to them. There are cowboys staying behind and working together to move their cattle from place to place as the fires’ directions shift. The firefighters are working in hazardous conditions to try to protect homes. People are coming together to volunteer to distribute goods to evacuees, to provide food for those waiting to register, to lend an ear if someone just needs to talk.

A disaster like the one BC is facing brings out both kinds of people. Those that would take advantage of a dire situation, and those that risk it all to help others and to protect what they have worked so hard for. We should be the person who spreads kindness, don’t take advantage of someone’s situation, consider what would it be like if the roles were reversed. This doesn’t just go for situations like the fires, but always.

With the fire that ravaged Fort McMurray last summer some of the most iconic images were the people riding their horses to safety through the thick smoke and glowing skies. The images that have struck me the most have been those of cattle being driven down highways, their faces covered in soot, forging where they can amid the ash.